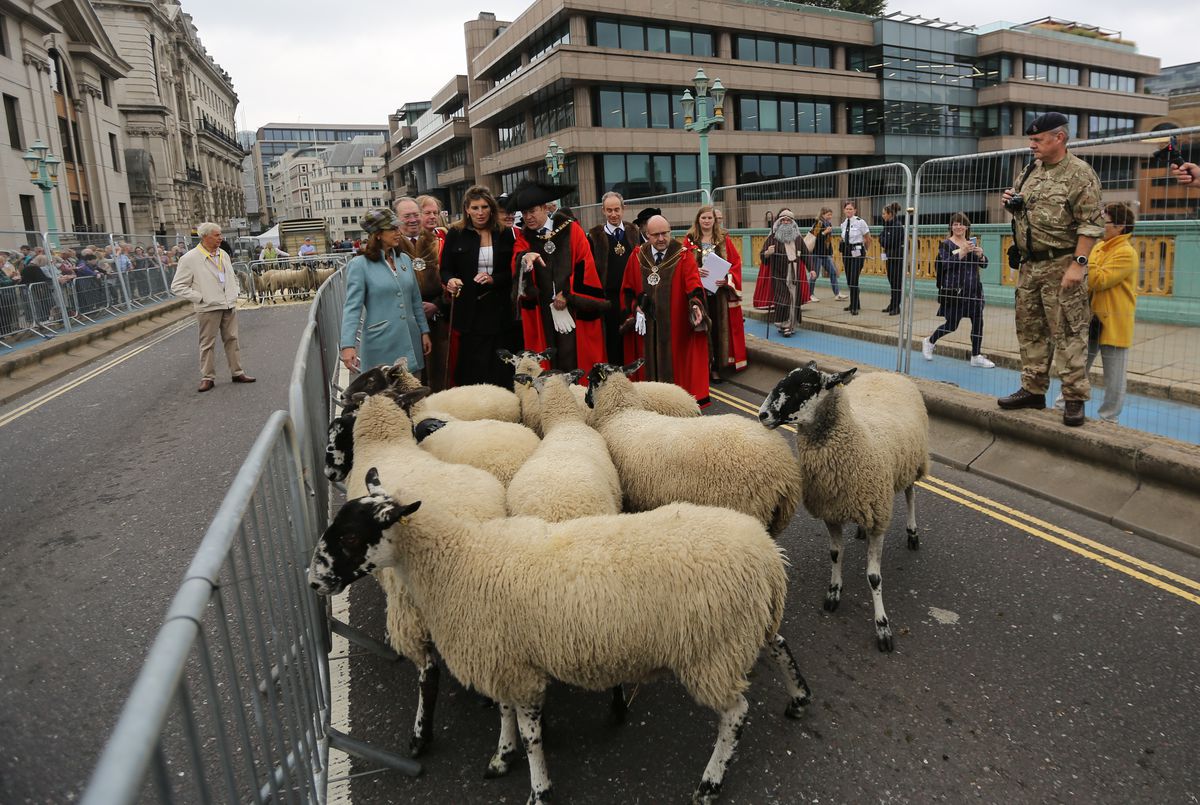 The small flock of sheep ran swiftly across London’s Southwark Bridge, carried forward by a group of cheerful men and women in long cloaks and floppy hats. From time to time, shepherds would stop to circle a faux ewe or lined up on the bridge for curious onlookers to watch.

Sunday’s unusual procession – known as the Sheep Drive – was a celebration of London’s 800-year history in the wool trade and an annual tribute to the historic right of shepherds to herd their flocks from the city to the market. It was also an opportunity to showcase the industry in Britain and abroad and to spark interest in this centuries-old fabric.

The wool business needs all the help possible. The pandemic and the growing popularity of cheap fast fashion have reduced demand for wool and drove prices so low that sheep farmers in many countries, including Canada, have opted to throw or burn their wool.

“The wool market, to be blunt, has been a bit of a wreck globally,” said Eric Bjargasso, general manager of the Canadian Co-operative Wool Growers Ltd., which markets nearly all the wool produced by Canada’s 9,400 sheep farmers. . Mr. Bajargso said that the price of wool has come down by 50 per cent in the last three years and the CCWG has been forced to accept wool on consignment on a large scale. “I’ve never seen anything like this before and I’ve been doing it for 45 years.”

Canada is a marginal player in the global wool market and most of our wool is exported to places such as China, the United States of America and the Czech Republic. But Canada once had a thriving wool and textile sector.

Back in the 1800s, Canadian wool mills helped clothe soldiers during the American Civil War, and by the early 1900s, there were about 300 mills nationwide, employing 12,000 people. The advent of synthetic fabrics after World War II gradually destroyed most of the industry and today only three large mills remain.

Nowadays almost all Canadian sheep farmers focus on meat production, and wool is often considered a nuisance. Most farmers rarely earn enough to meet the cost of shearing wool, which they have to do at least once a year to maintain the health of the animals.

There are few incentives for cleaning and caring for wool, which degrades the quality. Canadian wool typically contains about three times more plant matter, essentially sticks and other debris, than wool from Australia or New Zealand. This makes our wool harder to process and less attractive to mill operators.

Canadian wool is too coarse and ill-suited to high-end products such as heavy sweaters and cardigans. Wool fibers are measured in microns – one-thousandth of a millimeter – and fine wools such as merino are between 11 and 25 microns. Canadian wool is about 30 microns, more suitable for rugs and overcoats.

Helen Nibb, a sheep farmer outside Peterborough, Ont., who also studies the industry, said it was sad that Canadian farmers were forced to throw away wool. “I really can’t think of any other agricultural commodity that has been so underrepresented,” said Ms. Nibb, who is completing her doctorate on the socio-economic history of wool in Canada.

He is convinced that a revival is possible and that the tide will gradually turn in favor of Wool. She points to rising consumer demand for eco-friendly products, a resurgence in knitting and the rise of craft yarn manufacturers, wool festivals, and fashion houses seeking more natural materials. “I think most people have no idea how extraordinary wool is as a fiber,” Ms. Nibb said.

There is also talk of creating a Canadian wool trademark. Matthew Rowe, head of operations for Wool Canada, working on a national brand, said: “The sector in Canada has been weak for a few decades and so we need to rebrand and reevaluate Canadian wool.” Mr Rowe was part of a Canadian delegation at Sheep Drive, the first time Canada has been represented at the event. They have also included Canada in the International Wool Textile Organization, a global body that sets standards for trade.

One of the biggest challenges in Canada is the lack of scouring and carding plants that clean and straighten wool. Mr Rowe said the new investment would come slowly but in the meantime Campaign for Wool is trying to sign up British mills to process Canada’s wool.

Romi shills are among the sheep farmers who have embraced the possibilities of wool. Ms. Shill and her husband, Ryan, manage about 800 sheep on their farm in southern Ontario. The couple recently started a yarn-making business called Revolution Wool and they also make wool blankets and pillows. Whatever they cannot use ends up as bedding for farm animals.

“It has now become a serious part of the agribusiness, which is exciting,” said Ms. Shill. “I never would have expected it a few years ago.”