Will fitting solar panels help you cope with the energy crisis? Research claims it could add £1,800 to the value of your home…  … but do the sums before committing 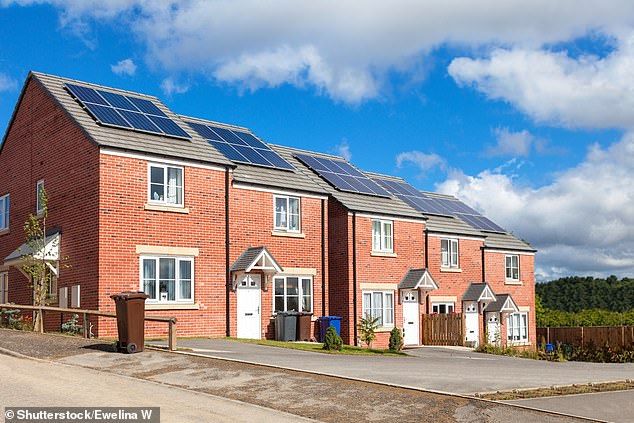 As the country plunges into an energy crisis and households with rising bills, interest in domestically-generated electricity is bound to increase.

With rising wholesale gas prices nearly doubling the average household energy bill next year, many people will turn to solar panels as a way to reduce rising costs.

But homeowners should check out how much they can realistically save before installing solar panels – as The actual figure may vary dramatically.

According to new data, having solar panels installed could add £1,800 to the value of a property

Trade body Solar Energy UK believes the system could save homeowners £330 a year off their energy bills.

In addition, it claims that adding solar panels can increase the sale price of a home by around £1,800 – or almost half of the up-front installation cost.

Here, we explain the impact of solar panels and outline some ideas homeowners should consider before proceeding.

Are solar panels critical to reaching zero by 2050?

It believes demand will increase as the UK adopts electric heating and transport, such as heat pumps and electric vehicles.

Its report found that demand was already high, with 33 percent of people saying solar panels were their third biggest home improvement priority, after kitchens and bathrooms, and replacing windows.

It peaked among young homeowners: Among 18 to 30-year-olds, 52 percent cited it as number three on their list.

This desire for solar power was perhaps not surprising, as 72 percent of homeowners felt that the environmental impact of their home was significant.

The report also includes recommendations for maximizing the contribution of residential solar systems to decarbonizing the UK economy.

Some 46 percent of homeowners said they would be likely to receive one if a new consumer finance product, such as a green mortgage, meant they could install a solar power system without paying any upfront.

It reached 71 percent for people from higher socio-economic groups.

The trade body is also asking the government to create a level playing field for solar; encouraging the development of new consumer financing initiatives; and develop green retrofit programs.

It said increasing solar energy consumption would be “an important measure” if Britain is to meet its goal of achieving a net zero economy by 2050.

Chris Hewett, CEO of Solar Energy UK, said: ‘The UK stands on the brink of a domestic energy revolution. There is a powerful investment case for residential solar.

‘Bringing new green finance products to market – and recognizing the value of solar homes – will help unlock millions of affordable energy projects for homeowners and occupants across the country.

‘Acting swiftly on this will help the UK move towards Net Zero which is good for consumers, good for the climate, and good for the UK solar power industry, which is ready and ready to deliver is ready.

‘Return on investment Upgrading a home with a solar power system creates an easy and simple way to reduce a property’s ongoing costs and increase its value, while crucially, reducing its environmental impact .’

What you need to consider before installation

However, there are several things people need to consider carefully before committing to installing solar panels.

Cost One of the main considerations is how much it costs to install the panels.

They’re often in the thousands to install, and they can’t be moved – so if you’re planning on moving home soon, you probably won’t get the financial benefit from getting them fitted.

Many people have been able to take advantage of the feed-in tariff scheme, under which they receive payment from their energy supplier if they generate their own electricity – but it stopped taking applications for new members in March 2020.

It is now replaced by Smart Export Guarantee, which works like this.

If you do get panels fitted, it’s a good idea to sign up for this plan.

Is your home suitable? You will also need to consider whether you will be able to install solar panels on your home, as not all properties are suitable.

While you won’t need planning permission in most cases, you will need to make sure you have enough space to fit them.

If you don’t have space for them on your roof, you can install an outbuilding to hold the panels.

The current guidance provided by the government states that an outbuilding should be single storey, with a maximum eave height of 2.5 meters and a maximum overall height of 4 meters and a double pitched roof.

Anything more than that would require planning permission.

Is your roof strong enough? The ceiling will need to be strong enough to hold the panels, and have enough room to house the inverter -…