‘We have a joke PM’: Dominic Cummings criticises Boris Johnson in wake of Covid report laying bare No10’s devastating failures – as minister refuses to apologise 11 TIMES for errors and admits he hasn’t yet read full dossier 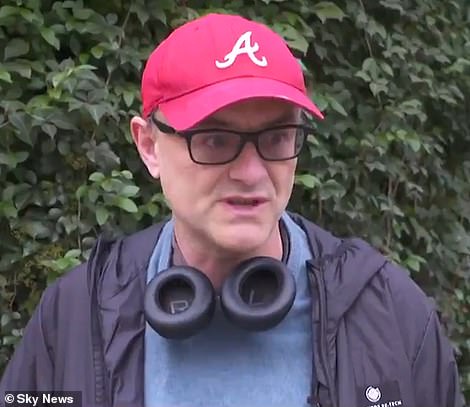 Dominic Cummings today called Boris Johnson a ‘joke’ in the wake of a disastrous report that bares No 10’s failures during the COVID pandemic.

Speaking to Sky News outside his home, the former chief adviser to the prime minister said: ‘I and others worked to try to improve the system in 2020 after the first wave.

‘Unfortunately, the Prime Minister joked that he has not been pushed through that work.

Mr Cummings, who has been an outspoken critic of Mr and Mrs Johnson since leaving Downing Street, said: ‘We now have a joking prime minister and a joking leader of the Labor Party, and we clearly need a new political system. the wanted.’

The report, published today by the Health and Science Committees in the House of Commons, is the first to shed light on a list of errors made at the top of the government.

MPs said ministers had been blindsided by ‘groupthink’ among scientific advisers who wrongly wanted to manage the spread of the virus rather than suppress it.

He also criticized the ‘chaotic’ performance of the £37 billion test and trace system, and said early decisions on lockdown and social distancing were ranked as ‘one of the most significant public health failures the United Kingdom has ever faced’. has given.

Minister Stephen Barkley has refused to apologize 11 times for the mistakes that killed thousands in Britain today.

He was repeatedly pressed by Sky News presenter K Burley to apologize to Britons, but the chancellor of the Duchy of Lancaster instead shrugged off questions.

Families of Covid victims today described the report as ‘laughable’, with a spokesperson saying it ‘barely mentions over 150,000 bereaved families’.

She continued: ‘Sadly, this is what we expected, as the committee categorically refused to speak to us or the bereaved families, insisting instead that they were only able to speak to their colleagues and friends. has an interest in.’

The first major investigation into the COVID crisis has concluded that thousands of care home residents died unnecessarily in the pandemic. Image: Mike Carr and Katie Foloit-Powell of South Central Ambulance Services’ Patient Transport Services help settle an elderly non-COVID-19 patient into a care home after being taken from hospital near Portsmouth.

What were the major findings of the first COVID report?

The UK’s first COVID investigation was published today in the House of Commons by MPs from the Health and Science Committees.

It revealed a list of failures to the top of the government, and sparked anger among families who lost loved ones. Pressure is building to launch an independent judge-led investigation as soon as possible.