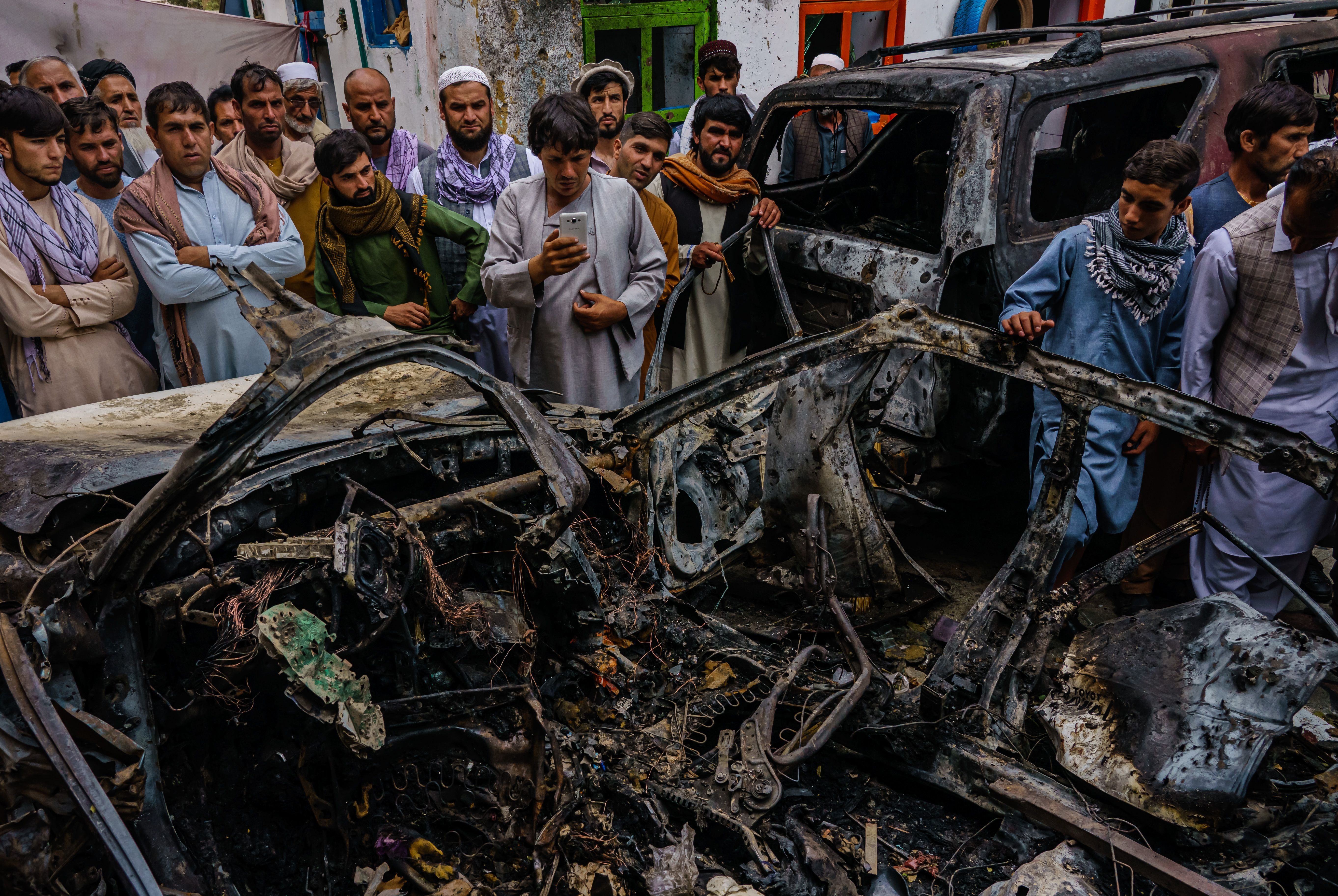 The Pentagon has acknowledged that an aid worker and nine family members, including seven children, were killed in a US drone strike in Kabul.

The head of US Central Command, General Frank McKenzie, said in a press conference the strike was a “mistake” that could be disastrous for Joe Biden’s presidency.

He said it was “unlikely that the vehicle and those killed were linked to ISIS-K or a direct threat to the US military.”

And he apologized for the horrors that happened after US spies learned of the plan for a terrorist attack on the airport in Kabul on August 29.

“It was a mistake and I sincerely apologize,” McKenzie said.

A drone had seen men loading explosives into a vehicle.

Actually, the victim Jemari Ahmadi was filling the car with a pitcher of water.

The 43-year-old was behind the wheel of his 1996 Toyota Corolla when the strike began.

However, an investigation determined that the explosion was probably a propane tank in the driveway.

McKenzie said tonight: “I extend my deepest condolences to the family and friends of those killed.

“The strike was taken with the belief that it would prevent an imminent threat to our forces and evacuation at the airport.

“But it was a mistake and I offer my sincere apologies as the combat commander responsible for this attack and this tragic outcome.”

He said the Pentagon is considering compensation for the families of the victims.

Ahmadi served with the US military.

He was pulled into the driveway of the house he shared with his family and the families of his three brothers when an American commander launched a Hellfire missile.

Some children died while running outside to greet them on their return.

Relatives of the young victims said they were so badly burned they could not be identified.

Unhappy relative Ramin Yusofi told BBC: “Why did they kill our family? Our children? They are so burnt that we cannot recognize their bodies, their faces.”

Ahmadi’s brother-in-law Najibullah Ismailzada said his sons Zameer, 20, Faisal, 16, and Farzad, 12, were killed in the blast.

And Imal Ahmadi said his two-year-old daughter was among those killed. They said they were waiting for a call to evacuate.

“If America is killing Daisho [Isis] So we’re happy – but you can see there’s no Daesh here.”

Another victim, Ahmed Nassar, is said to have worked as a translator with the US military.

The grieving brother of one of the dead told CNN His loved ones were “an ordinary family”.

He said: “We are not ISIS or Daesh and it was a family home – where my brothers lived with their families.”

President Biden is already facing global criticism for his decision to withdraw US troops from Afghanistan – opening the door for the Taliban.

Days after the disastrous strike on Mr Ahmadi and his family, he confirmed that his army would be out of the country by the August 31 deadline.

And he said that America can attack terrorists without putting shoes on the ground.

In a speech, he claimed: “We hit ISIS-K from afar after they killed 13 of our service members and dozens of innocent Afghans.

And just days earlier, on Monday, Pentagon press secretary John Kirby reiterated the claim that the strike was necessary to prevent an “imminent” attack.

The tragedy came days after the Kabul airport explosion, which killed 13 American soldiers and women.

According to the Pentagon, a separate US drone strike in remote Nangarhar province on August 27 – a day after the killing of soldiers – killed two alleged ISIS-K planners and facilitators.

His identity is yet to be confirmed.

Relatives say children, including a 2-year-old girl killed in a US drone strike in Kabul, were so badly burned that they were unrecognizable