Unvaccinated Americans are more than twice as likely to be hospitalized and seven times as likely to die of Covid as people who have received the jab, CDC study finds 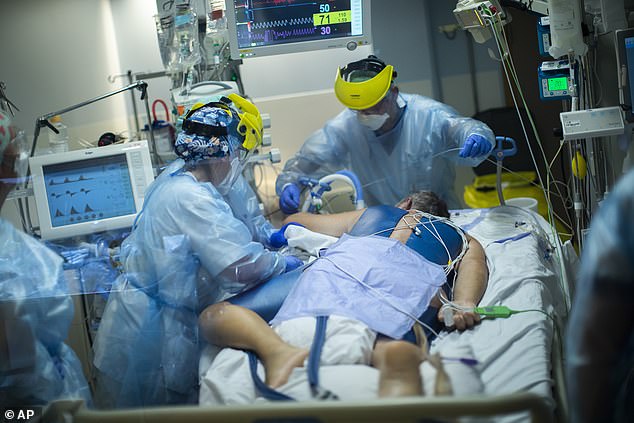 Yet another study adds to a growing mountain of evidence that unvaccinated Americans are at greater risk of complications from COVID-19 than those who get their shots.

A new report from the Centers for Disease Control and Prevention (CDC) has found that unvaccinated Americans are twice as likely to be hospitalized with COVID, and seven times as likely to die, than those who have not been vaccinated.

The study shows a huge disparity in health outcomes between those who have been vaccinated after contracting the virus and those who are not.

Researchers also say it strengthens the case that all Americans should get shots as soon as possible.

The report, published Thursday by the agency, collected data from the Kaiser Permanente Northwest health care system from July to September 2021.

Uninfected people were nearly four times as likely to be infected, with 4,146 — or 30.1 — of every 1,000 people who tested positive for the virus during the study period.

The research team found that people who were vaccinated who eventually became infected also did generally better.

More than 18 percent of the unaffiliated members of the study group who contracted COVID required hospitalization for their treatment.

Less than half of that total, nine percent, of those infected required that level of treatment.

Even when vaccinated people were hospitalized, they often performed better than their non-vaccinated peers.

The researchers say their findings support the need for widespread vaccination in the US, and show that the jab is effective against the delta variant.

‘During this period of wide delta version circulation (July-September 2021), the events of [Covd] Infections were lower in fully vaccinated individuals and less likely to result from [emergency room] travel, hospitalization, or death compared to cases of unrelated persons,’ he wrote.

‘These data support CDC’s recommendations for COVID-19 vaccination, including additional and booster doses, so that the public can protect themselves from severe COVID-19, including illness and hospitalization caused by the delta variant is included.’

While most Americans are fully vaccinated against COVID, there is still a remaining unvaccinated population that is at risk of serious complications from the virus.

According to official data from the CDC, 69 percent of Americans age 12 and older have been fully vaccinated, and about 80 percent are at least partially immunized.

Jabs are currently available to all Americans ages five and older, although ages five to 11 weren’t eligible until the first week of November.

Since the pandemic began, more than 767,000 Americans have died of complications from COVID, with nearly 1,000 dying every day.