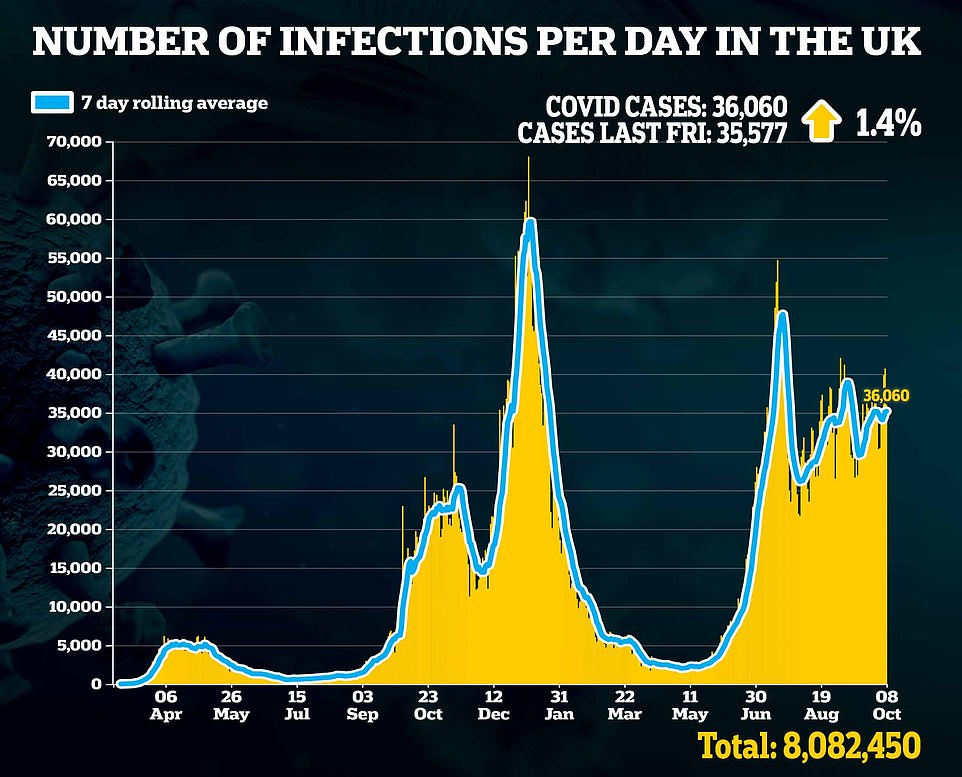 It was the third day in a row that infections from Wales climbed week-on-week, despite being exempt from today’s total due to a technical problem.

The number of people succumbing to the disease remained flat, with 127 deaths within 28 days of a positive Covid test – the same as last week. But Wales’ totals were also not accounted for.

But on Monday, hospitalizations fell 2.7 percent to 747 for which the latest date figures are available.

The figures come after separate figures showed that one in 12 children in England was infected with the coronavirus on any given day last week.

The ONS report found last week that the virus was most prevalent among children aged 11 to 16, with 6.9 percent of them estimated to be infected at some point – about one in 15 young people.

It is estimated that 786,300 people in England had the virus on 2 October, a 19.4 percent increase from the previous weekly figure.

Separate data from the UK Health Protection Agency (HSA) today showed that the R rate may still be above one and has risen slightly to between a range of 0.9 and 1.1.

The R rate was predicted to be 0.9 to 1.1 in both London and the North West. Experts estimate it may be slightly higher – between 0.9 and 1.2 – in the East, Midlands, South East and South West of England. And this figure was set at 1.0 to 1.1 in the North East and Yorkshire.

Data from the UK Health Protection Agency (HSA) today showed that the R rate may still be above one and has increased slightly between a range of 0.9 and 1.1.

Transport Secretary Grant Shapps said today that ‘common sense’ will be required after confirming double-jerked tourists returning to the UK will soon be allowed to photograph a COVID lateral flow test to verify whether They are negative.

The change in policy means that expensive PCR tests, which can cost upwards of £100, will eventually be phased out for families returning from half-timed leave.

PCR tests will be replaced by cheap rapid lateral flow swabs for travelers ‘before 31 October’, although free NHS tests will not be acceptable.

Passengers will now have to take a picture of the negative lateral flow result on the mobile phone and send it to the private provider from whom they had purchased it.

It will then be verified by a private provider, but it’s not yet clear how this will work – and concerns are now being raised about how people can give fake results.

Government sources told MailOnline today that ‘more details will follow’ on how the verification process will work.

Mr Shapps said today that he would rely on ‘common sense of the people’ when asked how officials can make sure a photographed test is of the right person.

Passengers must book tests through private providers and prove on their passenger locator form, which all passengers must fill out before returning, that they have done so. Lateral flow testing usually costs between £20 and £40.

The death toll today brings the UK total to 137,541 in official figures. Separate figures published by the Office for National Statistics show that 161,000 deaths have been recorded in the UK where Covid was mentioned on death certificates.

The ONS data shows that 8.1 percent of 11- to 16-year-olds had Covid – the equivalent of one in 12 children in the age group. Cases among youth have increased since they returned to classes early last month.

Some local authorities – including those in parts of the South West, Cumbria and Northamptonshire – have brought back face masks in an effort to stem the latest surge.

But infection rates among pupils are a mixed picture, as other data suggest infections already peak among young people.

Health department data shows that for the first time since the start of the new term, there has been a decline in the number of primary and secondary-aged children testing positive till October 2. And data from the country’s largest symptom-tracking app also suggested cases peaked in children.

But the infection rate is still very high – around 1.5 per cent of youth aged 10 to 14 have tested positive only in the last week.

This graph shows the estimated daily percentage test positive among different age groups in England from 22 August to 2 October. The infection rate across the country is a mixed picture, with…