UK’s daily Covid cases jump by 14% on last week to 38,520 as deaths and hospitalisations also rise by 10% with all three indicators now trending upwards 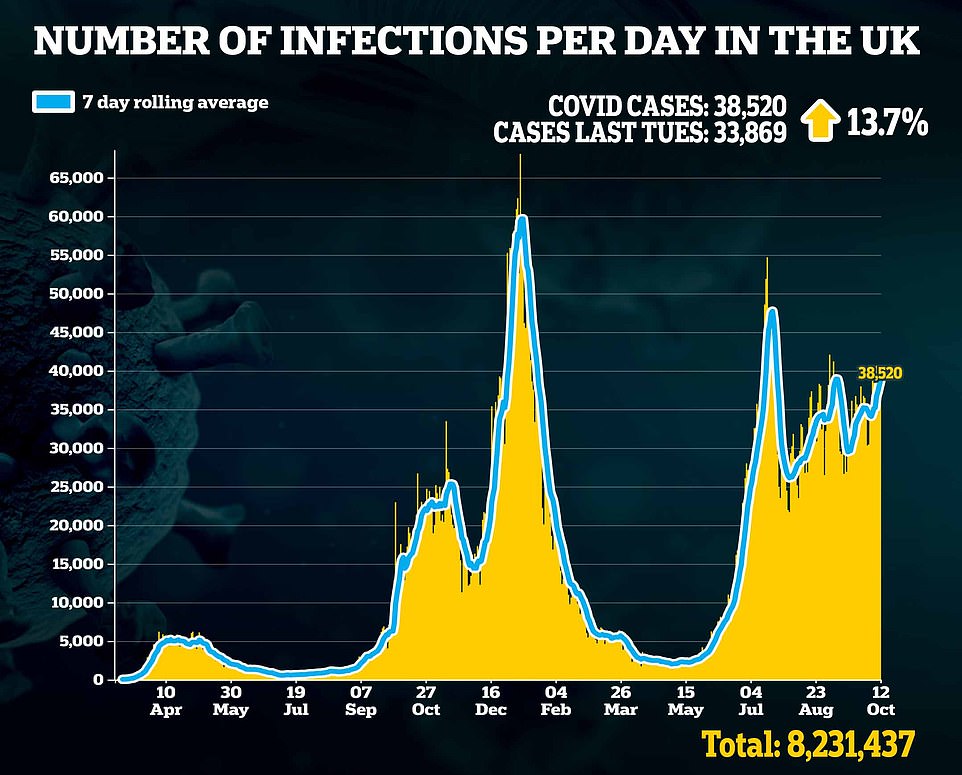 Britain’s coronavirus crisis continues to be on an upward trajectory, with new daily infections rising by nearly 14 per cent today.

Health department officials posted 38,520 positive tests, an increase of 13.7 per cent over the 33,869 recorded last Tuesday. The infection has increased week-to-week, every day for a week now.

Meanwhile, the trend of deaths and hospitalizations is also moving upwards. Both measures are weeks behind cases because of how long it can take for infected people to become seriously ill.

Another 181 victims were added to the government’s official death toll today, up nine percent from the 166 seen last week.

And hospitalizations also increased by 11.8 percent in a week. Some 766 infected patients were admitted to NHS wards on Friday, for which the latest data are available.

The figures came in the wake of a scathing report today after Keir Starmer called for a No. 10 Covid investigation that laid bare a string of ministers failing to tackle the pandemic.

The first major investigation into the COVID crisis concluded that thousands of care home residents died unnecessarily in the pandemic, and that ministers were blindsided by ‘groupthink’ among scientific advisers, trying to suppress it. instead wanted to manage the spread of the virus.

The dossier also claimed that the No10’s initial decisions on lockdown and social distancing rank as ‘one of the most significant public health failures the UK has ever experienced’.

Scientists have suggested that thousands of children with sniffles may be wrongly told to stay at home.

Secondary school children are asked to take two lateral flow tests per week. If they test positive, they should stay at home until they receive results from the gold-standard PCR swab.

The latest Test and Trace (T&T) figures show that 18,930 out of 615,000 rapid swabs taken by students in the week ended September 29 came back positive.

Children being wrongly told that they have COVID by devices has doubled in a month.

This has prompted health chiefs to launch an investigation, with the scientific community now discussing whether the increase is actually leading to a winter resurgence.

Experts have suggested that heavy mucus samples from children who test positive may reduce the accuracy of the swabs.

Gaming tests and faulty LFDs for taking time out from school have also been suggested as possible factors behind the increase.

But health chiefs have yet to release any daily figures for the third dose, despite the booster campaign being launched last month.

Separate figures published by the Office for National Statistics show that 163,000 deaths have been recorded in the UK, where Covid was mentioned on death certificates.

Speaking on a tour of a lorry driver training center near Oldham, Sir Keir said: ‘I think the PM can at least address the families, apologise, and move the public inquiry as quickly as possible. can.

‘But I just want to start by acknowledging how difficult it will be for the bereaved families to learn what they will in this report, which is a damning indictment of the government and the government for its flaws and errors and failures. Chaotic track and trace, with the price being paid by those bereaved families, driving the NHS down before the pandemic was too slow to respond.’

Latest data from Test and Trace shows the proportion of children being told they are positive for COVID when they do not have the virus by lateral flow devices has doubled in the past month (red line) . More than one in ten positive results from lateral flow are false

A disastrous report today exposed the list of failures at the top of the government at the start of the COVID crisis.

A major criticism is that ministers were in the early stages subjected to ‘group consideration’ among scientists who wanted to manage the spread of the virus rather than suppress it.

Former health secretary and Tory Party leadership candidate Jeremy Hunt admitted today that he too was part of a ‘groupthink’ that failed to plan for the pandemic.

He told Good Morning Britain that the country should have been locked down earlier.

He added: ‘Of course the prime minister is ultimately responsible, but some of the advice he received was also wrong.’

‘Ted Lasso’: Trent Crimm and Dr. Sharon Will ‘Have Significant Roles’ in Season 3