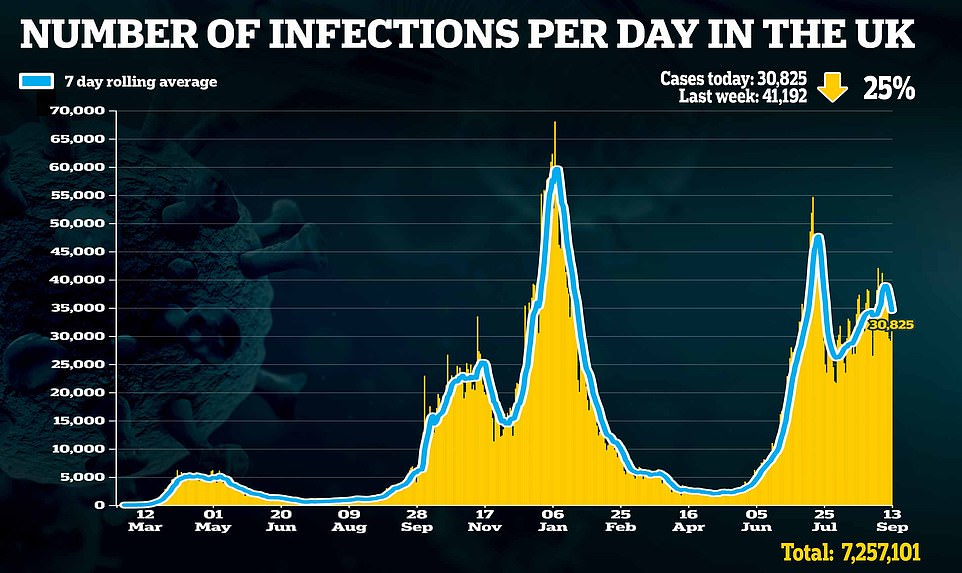 Official data shows Britain’s daily COVID cases today fell by a quarter over the past week, but deaths by a third.

England still suffered a Scotland-style spike in infections, which experts feared as children returned to classes after the summer break.

But schools in England are back less than a fortnight and the country was hit by a heatwave, with temperatures reaching 30C earlier this week, meaning people spent more time outside Where the virus finds it difficult to spread.

Another 61 Covid deaths were also recorded, an increase of 35.6 per cent from the same period last week when 45 were recorded. The death toll is three weeks behind because of how long it can take for the infected to become seriously ill.

The latest hospitalization figures for England have fallen by 14 per cent in a week, after 647 people were admitted to virus-hit wards on 11 September. No UK-wide data was available.

This comes as Professor Chris Whitty and chief medical officers of other developed countries announced today that a single dose of a COVID vaccine should be offered to all children over the age of 12. Nearly 3 million under-16s are set to start their jobs next week, with health chiefs claiming it will help prevent outbreaks in classrooms and further disruption to education this winter.

Parents, experts and teaching unions warned of tensions in schools after the UK signed off on plans that would allow children to see if they have been vaccinated.

Meanwhile, the latest vaccination figures show that 14,955 first doses were given yesterday, the lowest number since the roll out began, and 52,615 second doses were given. 48.4 million Britons – or 89.1 per cent of those over 16 – have already received one dose, and 44 million – or 81 per cent – ​​have received two doses.

England: The above graph shows the number of COVID cases in England as of the date reported. It shows that infections are decreasing in the country amid the heat of September, allowing people to spend more time outside

Scotland: The graph above shows the number of COVID cases in Scotland as of the date reported. This shows that the cases in the country are now falling after reaching their highest level since the start of the pandemic.

Wales: The graph above shows COVID cases as of the date reported in Wales. This suggests that infections in the country have remained stable for less than a fortnight after schools return

Northern Ireland: The graph above shows COVID cases as of the date reported in Northern Ireland. This showed that less than a fortnight of the return of schools in the country, cases have started decreasing.

Professor David Livermore, a microbiologist at the University of East Anglia, said cases have dropped to between 25,000 and 40,000 “without any concrete trend” since the end of July.

‘There was evidence of a spike in Scotland, probably associated with children returning to school,’ he told MailOnline, ‘but there is no evidence yet of a recapitalization in England.

‘It is clear that England’s “Independence Day” did not make a major resurgence and that strong residual restrictions in Scotland, especially masks, do no good.’

Nearly 3 million kids are starting to get their jabs next week after Chris Whitty supported the move to routinely vaccinate over the age of 12.

The dosage will be administered largely through the existing school immunization program, and parental consent will be sought – but children will be able to override their parents in case of conflict.

Angry parents resented the move to leave judgment with young children who ‘can’t even decide what they want for tea, no matter what’ a vaccine, which carries small risks of side effects .

Official figures showed that only one in 200 COVID deaths in England in the first half of this year were from people who were fully vaccinated.

The Office for National Statistics (ONS) identified 256 ‘successful deaths’ among 51,281 Covid deaths that occurred between January 2 and July 2.

More than 76 percent of these patients were clinically highly sensitive to the virus, and had underlying conditions or weakened immune systems.

The average age of a ‘successful death’ – when a person caught and succumbed to COVID despite having maximum immunity from two jabs – was 84.

Today’s ONS report is the latest to highlight the already massive impact of vaccines on reducing coronavirus deaths.

However, most deaths in the six months of research occurred during the height of the second wave, before vaccines became widely available.

Most elderly and frail Britons weren’t fully vaccinated until spring, which leaves the conclusions open.

More recently, fully vaccinated people have begun to account for a large proportion of Covid deaths, but it is because of this that jabs have been successfully taken.

More than 90 percent of those at risk are completely locked out, and because no vaccine is perfect, a small number continue to die. 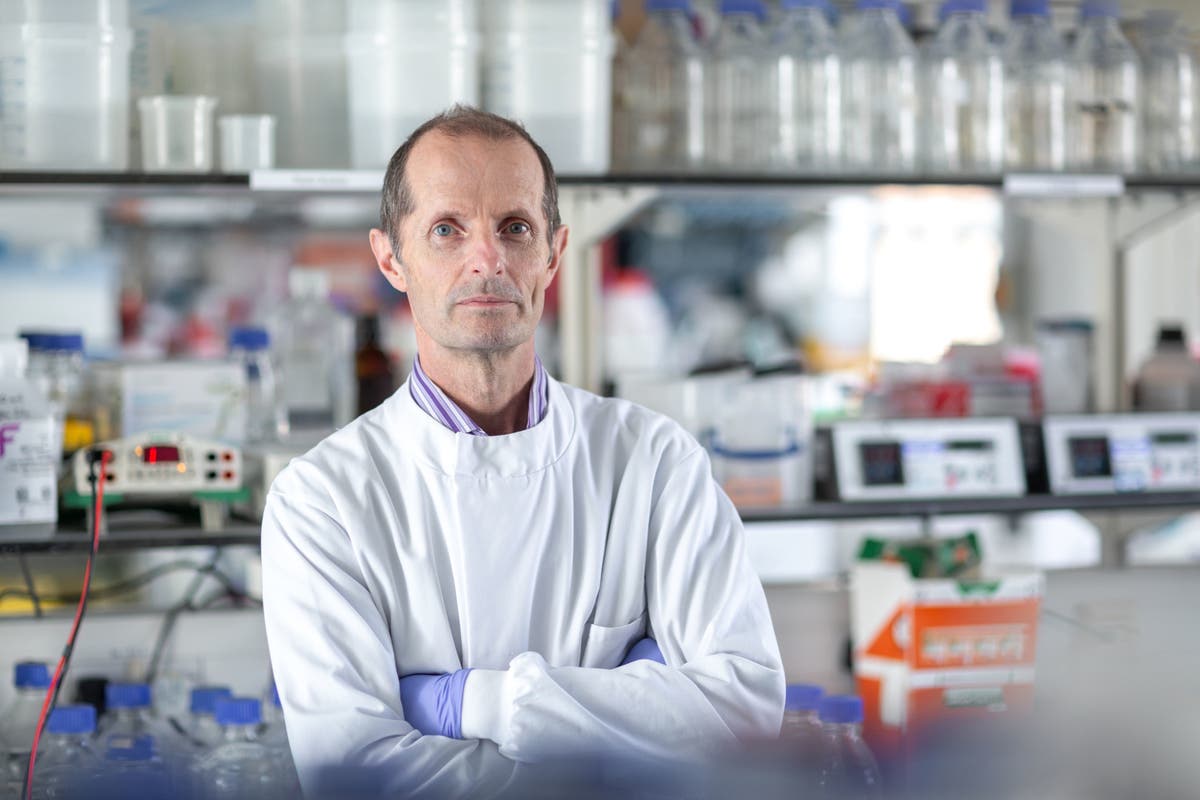 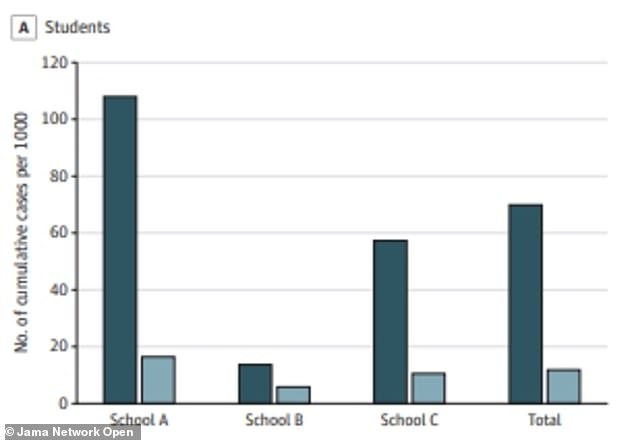 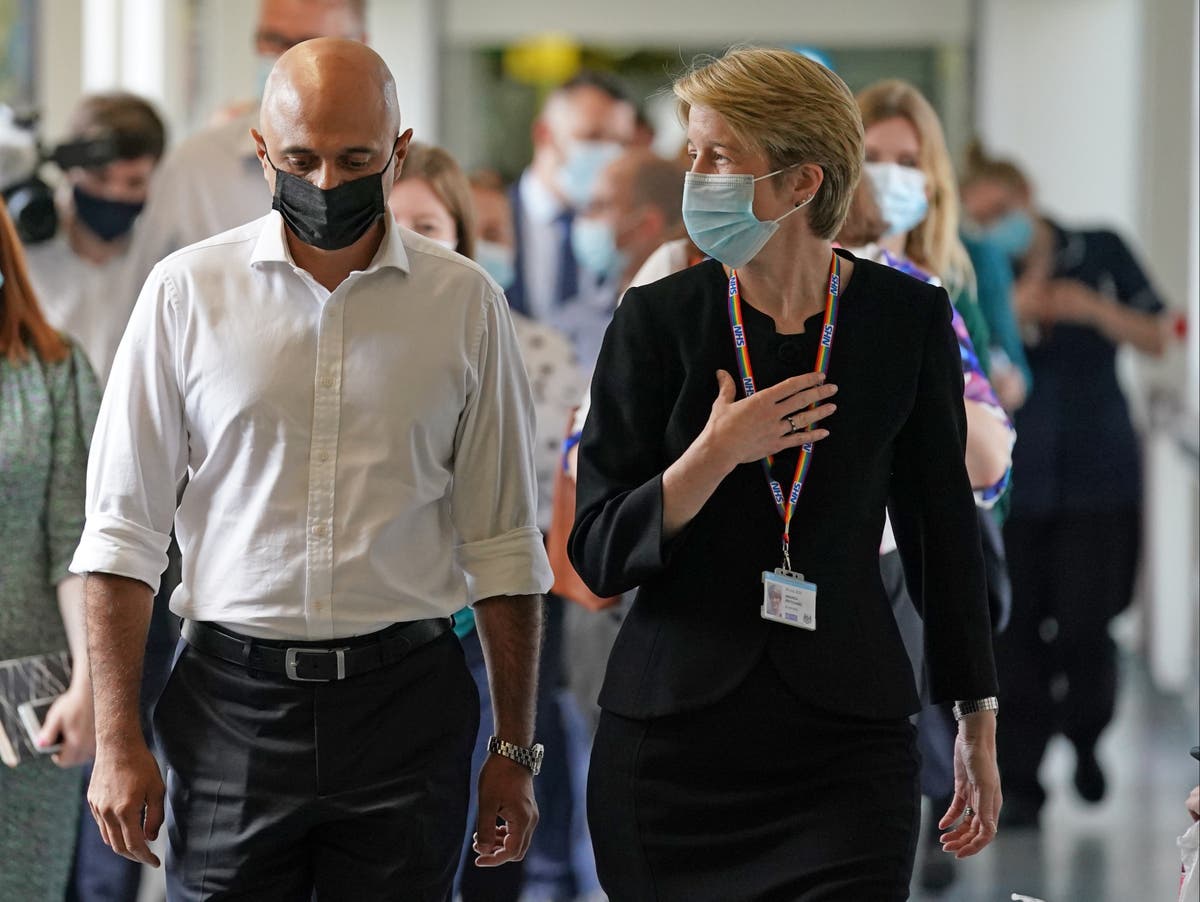