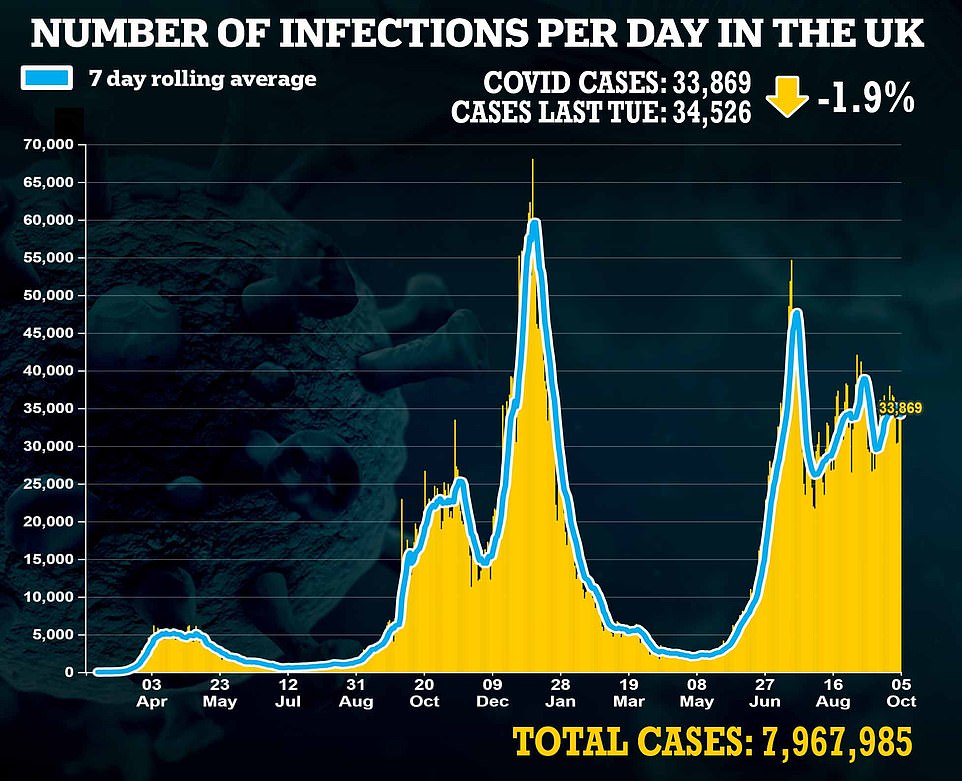 Covid cases in the UK have fallen for the sixth consecutive day – and hospitalizations and deaths have also decreased, official figures revealed today.

The health department’s daily update showed that 33,869 positive tests were reported across the country in the last 24 hours, a decline of 1.9 per cent in the previous week.

But hospital admissions and deaths – the two metrics ministers care about most – have also declined once again.

A total of 642 Covid patients were admitted to the hospital on Friday, showing a decline of 9.1 per cent over the latest figures available from the previous week. It was the second day in a row that they had fallen week after week.

And 166 deaths were recorded among people who tested positive in the past four weeks, one less than last Tuesday. This marks the ninth day in a row that they have dropped.

Both measures lag behind case counts by a few weeks, because it takes time for someone to become seriously unwell after being exposed to the virus.

It comes amid fears that a fourth wave will hit the UK in the coming months. ‘Professor Lockdown’ Neil Ferguson warned today that Britain does not have much ‘headroom’ if cases, hospitalizations and deaths continue to tick upward.

He said England may have to resort to its winter Covid ‘Plan B’ if daily hospital admissions for coronavirus are 1,200 – they are currently around 600. For comparison, the entry broke 4,000 in one day during the darkest spell of the second wave.

It will see the government bring back face masks, social distancing and working from home guidance, and offer a vaccine passport if the NHS comes under untenable pressure.

Boris Johnson announced last month that masks, social distancing and vaccine passports may have to be brought back if the NHS comes under pressure

Speaking to a cross-party committee of MPs today, he said: ‘If this figure was double, we would have had to think about going to “Plan B”.

The epidemiologist based at Imperial College London called for ‘more rapid’ restrictions if there is a sharp increase in admissions.

To get ahead of the winter wave, he said a second dose could be brought forward for 16 and 17-year-olds and advised that we are ‘more aggressive’ in giving boosters.

This comes as the Prime Minister today voiced growing confidence that Covid would not further extend the lockdown, claiming that the country was on track to stick to ‘Plan A’.

In a round of interviews at the Tory conference in Manchester, Boris Johnson said: ‘The data I am seeing at the moment is very clear that we are right to stick to Plan A, which is what we are doing.’

Meanwhile, the Department of Health revealed that 37,671 doses of the first vaccine and 29,337 second doses have been given in four UK countries.

But ministers have yet to disclose how many jobs have been given for 12 to 15-year-olds and as part of a booster campaign, both of which began last month.

Some 48.9 million first jabs have been administered, while 45 million Britons have been fully immunized.

This means that about 66 percent of the total population is fully immunized, far behind some of our European neighbors who have been having babies for months.

Experts who gave evidence to the All Party Parliamentary Group (APPG) on the coronavirus with Professor Ferguson pointed to relatively low immunity and warned that it left Britain vulnerable to a winter wave.

And despite a drop in UK cases today, it is tallying an average of 34,000 infections every day, still higher than most comparable EU countries.

England’s COVID hospital admissions (since the start of the pandemic): The number of COVID hospitalizations in England peaked during the second wave in January, when daily levels crossed 4,000

England’s COVID hospital admissions (over the last six months): A closer look at the data for the past six months shows that admissions rose sharply in July following a spike in cases

England Cases: The number of people who have tested positive for Covid in England has dropped over the past fortnight, after breaching 50,000 a day in July. Rates were highest in January, when the Alpha version took off

Deaths in England: The death toll from the coronavirus every day in England is now around 80, and has been falling over the past few weeks. Last April there were 1,000 deaths in the first wave and 1,500 in the second wave in January

Worm mothers secrete a milk-like fluid through their vulva to feed their young – destroying themselves in the process, study finds