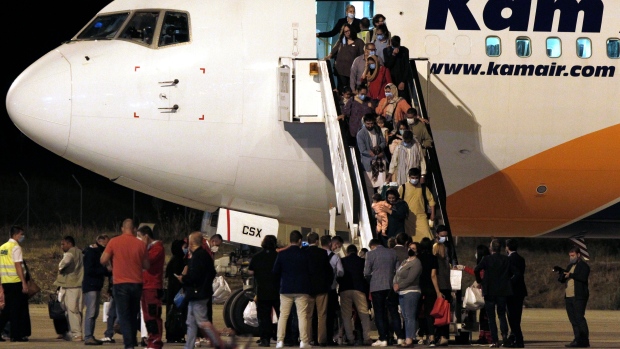 WASHINGTON – The United States is working to verify the accuracy of the list of passengers aboard a charter plane carrying more than 100 US citizens and lawful permanent residents evacuated from Afghanistan, the US State Department said on Wednesday. This landing rights after the organizers of Washington denied it.

“Our embassy staff in the UAE are working round the clock to verify the accuracy of the passenger manifest and are coordinating with DHS/Customs and Border Protection to ensure that passengers are not allowed to board the flight. First they can be investigated and investigated by the United States,” a State Department spokesman said.

“We expect the passengers to continue their onward journey tomorrow morning,” the spokesman said.

Brian Stern, founder of Project Dynamo, the non-profit group that chartered the flight from Kabul, said late Tuesday that the Department of Homeland Security’s Customs and Border Protection Agency had denied landing rights for a charter flight into the United States.

In a later interview on Wednesday, Stern said DHS had identified a man among evacuees as “a problem” at Abu Dhabi airport in the United Arab Emirates, but he did not know for sure. Was this the reason why the landing rights were denied.

“DHS arrived at the airport and said, ‘This guy doesn’t fly.’ They gave me his name. We went and found him. Told him he couldn’t fly and removed him from the manifest. But I don’t know if that was the issue,” Stern said.

DHS did not respond to a request for comment.

Stern’s group chartered a plane from Kama Air, a private Afghan airline, that flew their group of 117 people, including 59 children, to Abu Dhabi airport.

He said that he and the evacuees were deboarded from the jet, which has since returned to Kabul, and was being kept in a restricted movement room under the supervision of Emirati police officers.

“We are in custody while speaking in Abu Dhabi. We are all locked up here together,” Stern said.

Stern said he was scheduled to depart an early morning flight to Chicago on Thursday and that the State Department had “politely” agreed to pay for his group’s seats.

Stern said twenty-eight US citizens, 83 lawful permanent residents – green card holders – and six people with US special immigration visas granted to Afghans who worked for the US government during the 20-year war in Afghanistan were on board the Kam Air flight. .

The State Department did not immediately respond to a request for comment on Stern’s current status and flight costs.

Stern’s group is one of several that emerged from an ad-hoc network of US military veterans, current and former US officials, and others, formed to bolster last month’s US evacuation operation, which they described as chaotic and horrific. Seen as organized.

“All flights to the US must follow established safety, security and health protocols before being cleared for departure,” a DHS spokesperson said. “This process requires the flight manifest to be verified prior to departure to the US to ensure proper screening of all passengers.”

President Joe Biden’s administration has said its top priority is to bring back Americans and green card holders who were unable to leave Afghanistan during a US evacuation operation last month.

Stern had planned to transfer the passengers to a chartered Ethiopian Airlines plane for onward flight to the United States, which he said had been approved by the Customs Agency to land at New York’s John F. Kennedy International Airport.

Stern said the agency changed the clearance for Dulles International Airport outside Washington before denying the plane the right to land anywhere in the United States.