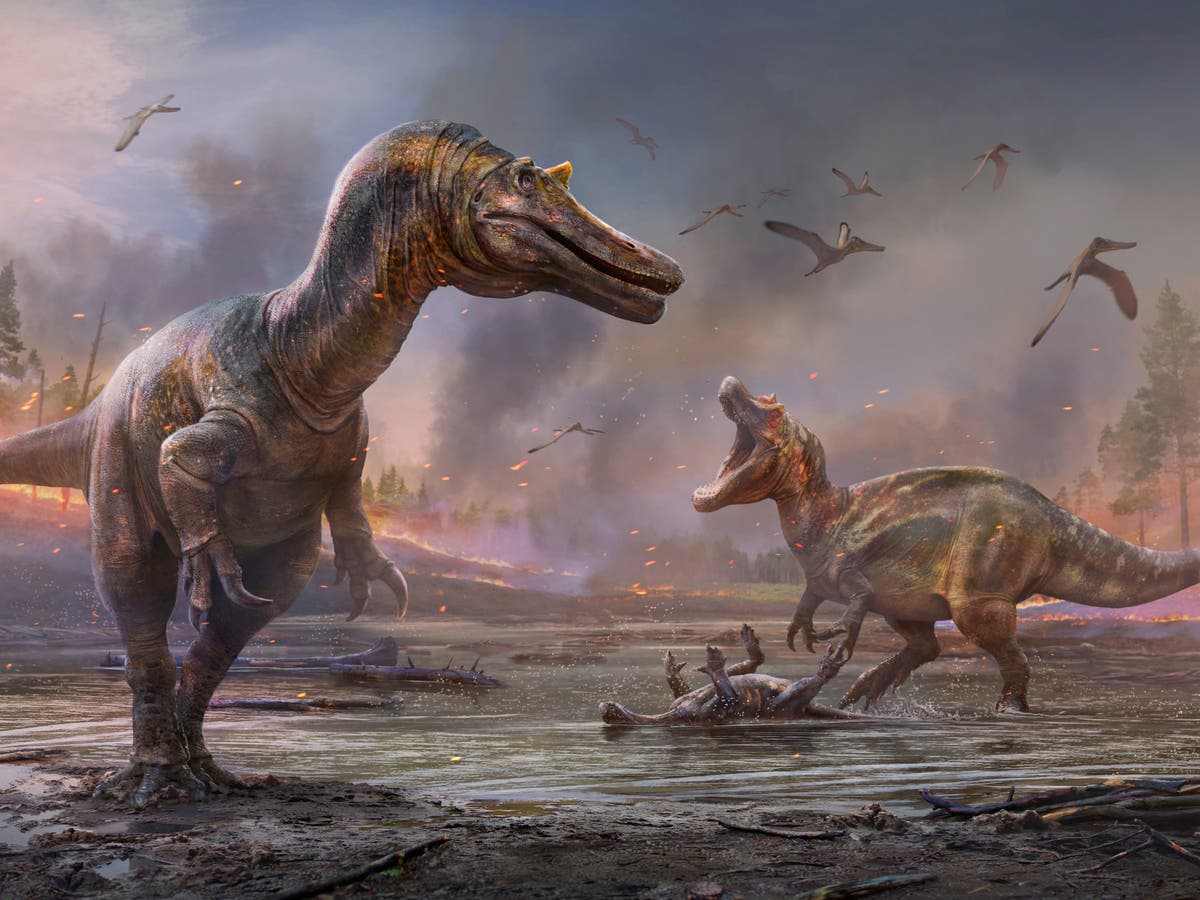 Two new killer dinosaurs – as big as a school bus – have been unearthed on the Isle of Wight.

The fearsome animals had bizarre “alligator-like skulls” that enabled them to hunt on land and in water.

They had razor-sharp teeth and claws – and a whip-like tail. The bone-crushing jaw would have halved the prey.

They are closely related to the giant Spinosaurus – the largest terrestrial meat eater that ever lived.

Its brow was adorned with a series of low horns and bumps – and it walked like the fading bird of today.

Herons are famous for catching aquatic animals along the waterways. But their diet is far more flexible than is generally appreciated.

They can be found in wetlands around the world in search of fish, crabs, frogs, small mammals – and even young birds.

The other was named Riparovenator milnare meaning “Milner’s riverbank hunter” – after a revered British paleontologist.

They belonged to the carnivorous group called spinosaurids. At that time the position of the Isle of Wight was roughly where Gibraltar is now.

It has been named ‘Dinosaur Island’. More dinosaur bones have been found there than anywhere else in Europe.

The bones were discovered on the beach near Brigston Bay on the south-west coast over a period of several years.

Fossil collectors with keen eyes initially found parts of two skulls. A team from the Dinosaur Isle Museum in Sandown recovered a large part of the tail.

In total, more than 50 bones have been excavated from rocks laid 125 million years ago during the Early Cretaceous.

The only spinosaurid skeleton previously found in Britain was that of Baryonyx – discovered in 1983 in a mine in Surrey.

Since then most other discoveries have been confined to individual teeth and single bones.

Lead author Chris Barker, a PhD student at the University of Southampton, said: “We found that the skulls are not only distinct from Baryonix – but also from each other.

“This suggests that the UK had a greater diversity of spinosaurids than previously thought.”

Scientific Reports’ study found that the length of the skull alone is 3 feet 3 inches.

Co-author Dr Darren Naish, an expert on British theropod dinosaurs in Southampton, said: “We’ve known for a few decades that dinosaurs like Baryonyx were waiting to be discovered on the Isle of Wight.

“But it was a huge surprise to find the remains of two such animals together.”

The analysis also shows that spinosaurids evolved in Europe – and then spread to Asia, Africa, and South America.

The most dangerous was the Spinosaurus or ‘spied reptile’ which was 50 feet long with a ‘sail’ on its back – formed by long vertebrae.

Co-author Dr David Hohn, from Queen Mary University of London, said: “It may seem strange to have two similar and closely related carnivores in an ecosystem.

“But it’s actually very common to both dinosaurs and many living ecosystems.”

The climate of the Early Cretaceous flood plain was bathed in a Mediterranean climate.

Brian Foster, an amateur fossil collector from Yorkshire, said: “This is the rarest and most exciting discovery I have made in 30 years.”

While generally balmy, forest fires occasionally ravaged the landscape – the remains of burnt wood can be seen today throughout the cliffs.

Fellow collector Jeremy Lockwood, who lived on the Isle of Wight and discovered many of the bones, said: “We realized this would be something rare and unusual after two snouts were found.

“Then it became more surprising as many collectors found and donated other parts of this giant jigsaw to the museum.”

A large river and other bodies of water attracted dinosaurs and housed various fish, sharks and crocodiles.

The habitat provided spinosaurids with plenty of hunting opportunities.

Project Supervisor Dr Neil Gostling, also from Southampton, said: “This work has brought together universities, the Dinosaur Isle Museum and the public to reveal these amazing dinosaurs 125 million years ago and the incredibly diverse ecology of England’s south coast “

It also cements the Isle of Wight’s status as one of the top spots for dinosaur remains.

The fossils are to be displayed at the Dinosaur Isle Museum.

Dr Angela Milner, after whom the Reparovinator was named, passed away recently.

He had previously studied and named Baryonyx—which greatly improved our understanding of spinosaurids.