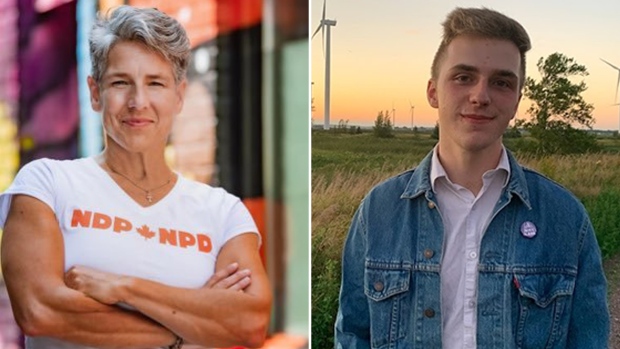 Essex, Ont. Jagmeet Singh says anti-Semitic remarks made by two of his party’s candidates who resigned were “completely wrong” as the NDP leader made a push to win Ontario’s demand.

“Antisemitism is real,” Singh said during a campaign stop in Essex, Ont.

“We are seeing a terrible rise in anti-Semitic sentiment, and we are clearly protesting, and we will face it.”

Singh said there was no place for anti-Semitism in his party and the candidates took the right decision to resign.

“Also, they are talking about the importance of getting training,” Singh said.

Coles, who has since deleted his Twitter account, was reported to have posted false information about Israel linked to missing COVID-19 vaccines.

Osborne was reported to have tweeted to Oprah in 2019 asking whether Auschwitz was a real place, referring to a Nazi-run concentration camp in Poland during World War II.

He responded to the post on Twitter over the weekend, saying he had tweeted it when he was a teenager.

“I want to apologize,” Osborne tweeted on Sunday. “The role of Auschwitz and the history of the Holocaust is one we must never forget.

“Anti-Semitism must be confronted and stopped. I don’t remember posting that, I was 16 then and can honestly say I didn’t mean to do any harm.”

Jaime Kirzner-Roberts, policy director at the Friends of Simon Wiesenthal Center for Holocaust Studies, said in a news release that he had been in touch with the New Democrats. He said he was relieved that the candidates had quit.

“We thank NDP leader Jagmeet Singh for his leadership in ensuring this outcome,” Kirzner-Roberts said.

A handful of candidates from other parties have also dropped out during the election.

Last week, the Conservative Party fired candidate Lisa Robinson for Beach-East York in Toronto after Islamophobic social media posts surfaced. Robinson has claimed that the account is fake and had previously reported it to the police.

Liberal Raj Saini resigned earlier in the campaign after facing allegations of harassing a female staff member, a claim he vehemently denies.

Singh denounced Coles’s posts during a campaign on Tuesday, but did not demand his step down. At the time, he said making a “clear apology” of the candidate was the right thing to do.

Singh on Wednesday did not explain why he did not push for resignation sooner, but reiterated that it was the right decision for the candidates.

New Democrats are filling their schedule for the final push before the election.

Hundreds of people cheered and held signs during stops at London West and Niagara Center to welcome Singh – both of whom had been Liberal in the last election. He asked the supporters to vote wisely.

The NDP leader has continued to reject that people should follow the idea of ​​voting strategically and kept his eyes on Justin Trudeau during the final push.

“There is a price to vote for liberals,” he said.

Singh will also take his message to Ontario Riding in Hamilton and Brampton East.

He will end the busy day with a livestream on Twitch, an online gaming site. Singh, who has adopted social media trends and videos, said it is a way to connect with potential voters.

This report by The Canadian Press was first published on September 15, 2021.