The great-great grandson of Cadbury’s founder launched his plant-based chocolates six months ago and has now sold 250,000 bars Sweet success 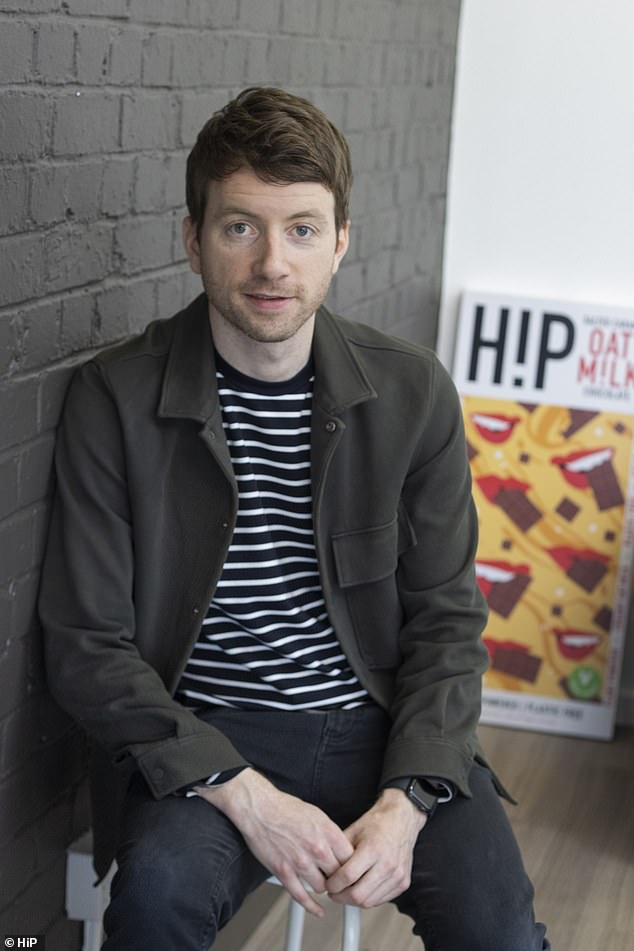 With a surname like Cadbury, you’d think that James Cadbury—the great-grandson of John Cadbury—the founder of the confectionery business, had his future set up for him. You would be right – partially.

James’ family is no longer involved in Cadbury’s, but that hasn’t stopped him from starting his own sweet business – the sustainable premium chocolate company, Love Cocoa, and Happiness in Plants (HiP), a vegan brand.

James launched HiP earlier this year to put his ethical stamp on the industry and create a vegan product that appeals to the taste.

They say: ‘There is ample room for innovation in the vegetarian milk chocolate sector as existing brands lack flavor.

‘If you’ve ever tried dairy-free chocolate before, you’ll know what I mean. HiP Oat Milk Chocolate delivers both flavor and appearance – a deliciously creamy dairy-free alternative.’

James, 35, says HiP was inspired by the oat milk drinking habits of Love Cocoa employees, which he started in 2016 after working as a downtown merchant.

He says: ‘Everyone in the office has reduced dairy and meat and that’s where it all came from. We are also giving people options and want them to understand that there is a good quality option.

The HiP business, which is based in East London, produces ethically sourced chocolates. To stamp out modern-day slavery they have made sure they know who works within their supply chain and sources the bars from a family-owned business in Bogotá, Colombia, that has been around for more than 100 years. producing cocoa.

James says: ‘We saw no one was selling chocolate bars made with oat milk so we worked with developers in Colombia to create a vegan chocolate. It does not contain dairy and is 100% plant based.

However, the bars still contain some sugar—but James points out that they have 30 percent less sugar than the average Dairy Milk bar, plus 41 percent more cocoa.

To take advantage of the festive season, and to ensure vegetarians can join in, HiP has launched an Oat Milk Advent Calendar and limited-edition celebration bar.

The calendar, which retails for £10 per 144g, features 24 doors of HiP salted caramel squares and is also 100 percent plastic free, in line with the brand’s eco and sustainable ethos.

James says: ‘HiP has well and truly captured the flexitarian zeitgeist with both its hip flavors and branding, so creating an advent calendar featuring our bestselling flavor, salted caramel, was a no-brainer. Skipping dairy no longer means missing out on a quality chocolate advent calendar this Christmas.’

It has sold 250,000 times since its launch in March. In the first six weeks of launch, HiP sold 100,000 times. James expects the brand to exceed £1 million in its first year of business.

To coincide with the festive season, HiP has also launched a Gingerbread Oat Milk Chocolate Bar (£3 per 70g).

While making a profit is an ambition, James is willing to delay it to focus on growth.

‘We want to do £1.5million in turnover in the first year, and we are well on our way to getting there. In terms of profit, we’re not going to do that because we’re going to reinvest it in marketing. We just want to grow the company and don’t want to focus too much on profit.’

The products are stocked at Selfridges, Holland & Barrett, WHsmith Travel and Retail and are available through the company’s own website. Tasting packs are available at £11.95.

Its products are also available through Ocado and Farmdrop.

There are plans to bring the products to mainstream retailers like Waitrose, Sainsbury’s, Tesco and Morrisons, which will give them the full nationwide coverage they want.

Expansion abroad is also an ambition and that has already started.

James says: ‘We’ve sold out’ [products] For a supermarket in Ireland and Dubai.

‘We have been interested in small stockists in Germany as well as people contacting us and offering plant-based chocolates.’

While chocolate-making may be in their blood, the launch of HiP did not come without challenges, which came in the form of Covid restrictions, Brexit red tape and supply chain issues with Colombia.

If it weren’t for those three obstacles, James claims the launch would have happened sooner.

‘Brexit has been a pain with the new regulation in terms of country of origin. There is more paperwork which we have found challenging, and the guidance was not as clear as it could have been.

But James now feels that the hard work has paid off. ‘It’s been a really great, exciting journey and it’s nice to see all the long hours and post-Covid customer reactions.

‘It has been difficult to launch during Covid – my team hasn’t worked in the office for a while and getting the team to try it out and get feedback has been a challenge, but we have adapted using technology and made it possible.

‘Oat is the future’

‘Counting On’: Jed Duggar and Katey Nakatsu Are Pregnant — When Is Her Due Date?