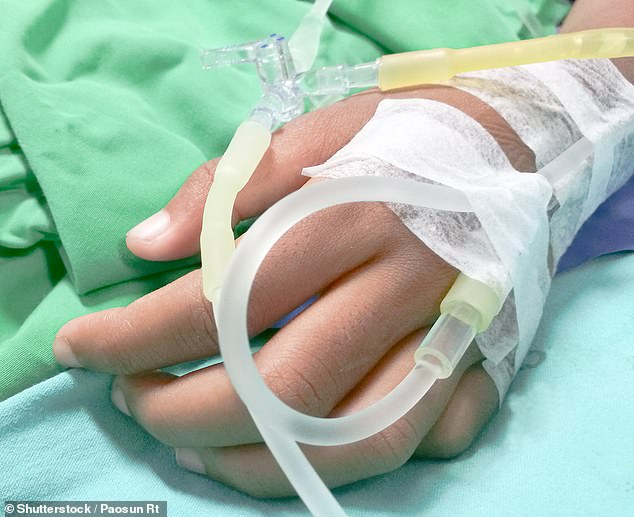 Ensuring that sick patients receive the full dose of medication prescribed to them may seem like a basic condition of medical care.

Yet small amounts – as it is known medically – are a significant problem in the NHS which according to some experts could put patients at risk.

This can happen when intravenous medication is given to hospital patients.

Once the bag of solution is empty, it is removed along with the tube through which the liquid is poured into the patient, and both are discarded.

But, inevitably, some of the liquid containing the medicine will remain inside the tube, especially when the IV kit (or set, as it is also known) relies on gravity—without the liquid in the bag, to push the remainder into the tube. There is nothing for the patient.

According to some experts, underdosing – as it is known medically – is a significant problem in the NHS that can put patients at risk. This can happen when drugs are given intravenously to hospital patients.

Under the guidelines, the doctor and nurse are supposed to ‘flush’ the tube with saline, so that the patient does not miss out on the remaining dose. This should be done for all intravenous (IV) medications, including antibiotics and pain relievers (but not necessary for hydration fluids).

To flush the line once the IV infusion is finished, a new small bag of saline (50-100ml) should be added along with the drip and the infusion should be resumed to push out any residual drug in the patient .

The National Infusion and Vascular Access Society (NIVAS), which represents healthcare workers involved in the administration of IV drugs and vascular access, issued new guidance in February 2021 after two studies last year suggested a triple dose of the drug. could have been given. Lost if the line is not flush.

While line-flushing is standard practice in cancer care and pediatrics, in other wards it is ‘rarely done’, according to Rachel Dixon, an enteral nurse specialist and a former NHS infusion manager, who is largely unrecognized. Reducing the issue has received the attention of NHS England.

‘The idea seems to be that when the IV bag is emptied, the full dose has been given. But it is not,’ she says. ‘A proportion of it will still remain in the tube and if it is not flushed out, the patient will not receive the full dose.

‘We should give medicines as prescribed, not as we think; We should throw saline, not medicine. This bad practice is a nationwide problem.

A 2018 study across six departments at a large UK teaching hospital found that overall, 74 percent of IV sets were not flushed over the course of a week. This increased to 99 percent on surgical wards, 80 percent on critical care and high-dependency units, and 89 percent on emergency admission units.

None of the IV sets containing pain relievers and antibiotics were flushed – and while ‘about a third’ still had antibiotics, up to 21 percent of the doses were doled out, the researchers said.

While line-flushing is standard practice in cancer care and pediatrics, in other wards it is ‘rarely done’, according to Rachel Dixon, an enteral nurse specialist and a former NHS infusion manager, who is largely unrecognized. Brought to the attention of NHS England to reduce the issue received

According to the study in the British Journal of Nursing, oncology was the only department where all IV sets were flushed.

Another UK study, published in August last year in the journal JAC – Antimicrobial Resistance, found an estimated 33 percent of antibiotics could be lost; Whereas a US study published last year in the Journal of Infusion Nursing found it was 35 percent.

The potential impact of low doses is far-reaching. Rachel Dixon says, “If patients do not receive the prescribed dose of medication, it can impact their recovery time, which means the longer the hospital stay, the more expensive it is.” with malaria.

In its guidance, the NIVAS acknowledged that ‘flushing IV infusion sets are rare in adult patients’. Between 20 ml and 30 ml of the drug solution can be lost, says Rachel, which could be ‘half the dose of a 50 ml bag’.

Under the new guidelines, medical workers are advised to flush lines and use a new IV set for each different medicine.

In 2017, NHS England issued a Patient Safety Alert warning that a patient’s IV line should be flushed at the end of each surgical procedure to prevent any residual anesthetic or sedative drugs from being inadvertently administered to the same patient later. must be removed, causing ‘muscle paralysis’. Fainting and respiratory and heart failure’.

In one case, a young woman, known only as Katherine, was temporarily paralyzed and went into respiratory arrest after taking residual anesthetic drugs—in 2015, during an operation to remove her appendix. Granted – antibiotics were not flushed from the cannula before being put through. Same tube a few hours later.

She later said, ‘When the nurse gave antibiotics, it flushed out the paralyzing agent inside me. ‘I felt this crowd passing through my body and everything was freezing. This got me really nervous and I could feel the air coming out of my lungs. I was conscious but completely paralyzed – I couldn’t open my eyes or communicate.

He said, ‘Within an hour the anesthetist who had made the mistake came and sat down by my bed.’ ‘He was devastated. It was a very costly mistake for both of us.

According to NIVAS president and guidelines editor Andrew Barton, improvements in the design of IV kits mean that residual volume is likely to be much lower than recent studies suggest—even less than 5 percent, they say.

Reflecting on the problem, he told Good Health: ‘Unfortunately, for some reason in the last 20 years it had become common practice to abandon it…