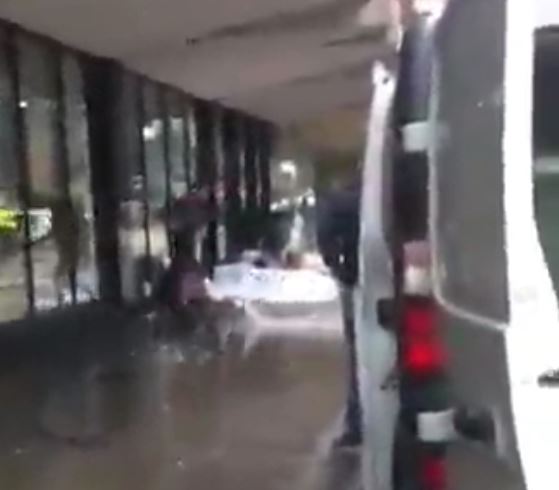 A street cleaner was pulled up after he was seen spraying a homeless man with a jet washer while cleaning the sidewalk.

Next to where the victim was lying, the worker can be seen pouring down concrete with water.

He is then caught on camera as he is seen submerging the makeshift bed in water.

At one point, the homeless person sits on his bed after getting wet, and appears to be raising his hand.

The worker continues to spray water until the filming woman approaches and asks: “Are you from Camden Council?”, before the video cuts.

Footage of the incident in Camden, north London yesterday sparked outrage after it was shared on social media by homeless outreach group Streets Kitchen.

Streets Kitchen claims it is part of an “increasingly hostile environment in London for those experiencing homelessness”.

“These inhumane attacks on those who feel homeless in the city can never be acceptable.

“We, along with many of our Homeless Taskforce colleagues, are observing and documenting an increasingly hostile environment in London, particularly for those experiencing homelessness in Camden and Westminster.

it must stop now

The Museum of Homeless People, an award-winning social justice museum documenting the history of homeless people, said: “This is dehumanizing.

“Unfortunately aggressive enforcement tactics are so common at the moment, there seems to be something to be gained for the agencies and officials who use these strategies.”

Matt Downey said: “What is it achieving besides dehumanizing people? Terrifying.”

Catherine Bollard slogged: “It’s sick! Being the fancy person the person asked to do and it’s okay to feel?

“It’s not okay to do this to people who are sleeping.”

Scott Thompson said: “Sadly, the person doing this doesn’t recognize the homeless as human beings – he only sees an object equivalent to a trash can on the street.

A Camden Council spokesman said: “We expect that people who experience homelessness in Camden will be treated with respect at all times. We are watching this incident to understand the full circumstances of this incident.

“We can confirm that the cleaners are not Camden Council employees or contractors.”