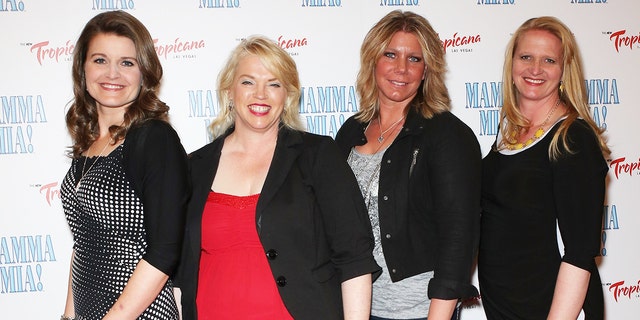 Cody Brown and his four wives – Mary, Christine, Janelle and Robin – continue their marriage for TLC

The patriarch and his four wives are returning for Season 16 of “Sister Wives”, where they will continue their ongoing family drama.

On Tuesday, TLC released a teaser clip that shows the women living apart from each other during the coronavirus pandemic while the 52-year-old travels between homes. According to the outlet, the new season will follow the family’s move to Flagstaff, Arizona.

“When it comes to the COVID virus, I’m not willing to put the life of a family member at risk,” said the Wyoming native. us weekly. “I’m the only one going from house to house.”

‘Sister Wives’ Star Mary Brown Opens Up About Feeling ‘Totally Manipulated’: ‘The Power Stance Is On!’

The 49-year-old admitted that she wanted to go back to Utah.

“Why would I want to live with a dysfunctional marriage on the same property where he has a full working marriage?” she said during a confessional interview. “Who would ever want to live like this?”

The outlet noted that Janelle, like the other wives, is not happy with Brown’s quarantine arrangement.

“I’m at my wits’ end with this whole bull-t stuff,” she said.

As for Brown, he is upset with Robin, who appears to have taken over during the exam.

“It’s harassing me [that the other wives are] Looking at Robin, like, for some sort of approval,” he said. “I don’t have a head wife in this family.”

Robin, 43, said she felt “the foundation on which our family was built is crumbling.”

Wife Mary previously admitted that his plural marriage with Brown was “dead”.

“The relationship between him and I is over,” she said in a “Sister Wives” episode in February. “It’s dead. It’s over.”

In March, the 50-year-old told people magazine That her relationship with Brown has changed over the past decade since the premiere of the TLC reality TV series and remains committed to working through their issues.

“I think all relationships, you know, have issues that they have to work through,” Mary explained. “And I think that’s exactly where we are at now. For me personally, I’m not one that’s going to give up.”

“I’m just going to keep at it, you know?” He continued. “Ib and flow in the relationship… I guess that’s normal.”

In the series, Brown admitted that he only saw Mary “once in a blue moon.”

Brown and Mary tied the knot in 1990. Three years later, the couple welcomed sister wife Janelle to their plural marriage, followed by Christine in 1994. Robin joined the family in 2010 as the fourth wife.

‘Sister Wives’ star Cody Brown explains why he still doesn’t want to be intimate with his first wife, Mary

Brown was only legally married to Mary. However, Mary agreed to divorce Brown so that she could tie the knot with Robin in 2014. That legal change would allow Robin’s three children from a previous marriage to receive the same benefits as the rest of Brown’s children.

Brown said he considers himself “spiritually” married to his four wives. There are total 18 children in the family.

“Sister Wives” aims to show how the Browns and their family live in a world that abandons their lifestyle. The series has been airing since 2010.

It is illegal to marry more than one person, or bigamy, throughout the United States. The law in Mormon-heavy Utah is considered strict because of a unique provision that prevents married people from living with another “spiritual spouse.”

The Church of Jesus Christ of Latter-day Saints outlawed polygamy in 1890 and strictly prohibits it today. Brown considers himself a radical Mormon.

Back in 2019, Brown told Granthshala News that the family has agreed not to consider a fifth wife anytime soon.

“We actually took the fifth wife off the table a long time ago,” Brown said. “And because we don’t want to turn down the concept, we’ve always been dismissive of it very casually, and I think that’s one reason why the question keeps popping up. But it’s technically off the table as long as Till we have done the show.”

Gov. Kristi Noem: We can’t rely on a debt-ridden federal government to take care of us