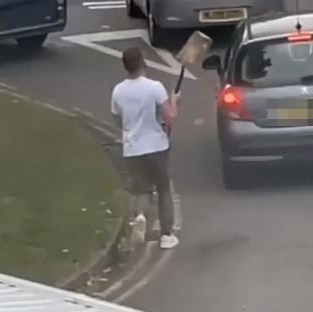 Shocking footage shows a driver chasing a man with a giant spade before smashing his rear window.

A furious motorist began his assault after his body was tossed to the ground during a roadside brawl in Dagenham, east London.

Before things quickly turn bad, the clip begins with the two men quarreling.

One takes the other into a headlock and then lifts him off the floor before crashing.

He then repeatedly punches the van driver in the head before the pair separate.

The bodyslam victim grabs a shovel from his van and runs towards his opponent’s vehicle as he drives.

In an extreme act of road rage, he sends a crashed spade into the rear windscreen, blowing away broken glass.

The driver of the damaged car then ejects his car from the passenger side as it reverses away from a junction.

He throws it back like a screwdriver at the other motorist when he tries to take shelter in his vehicle.

Inaudible words are exchanged before the video is cut out.

It is not known what led to the violence, but it is being told that it happened this morning.

It follows a similar brawl in which a furious driver overturned a car before cutting it down and trying to pull the motorist onto a busy road.

Violence broke out on the A4093 between Tonirefel and Gilfach Goch in South Wales on 17 September.