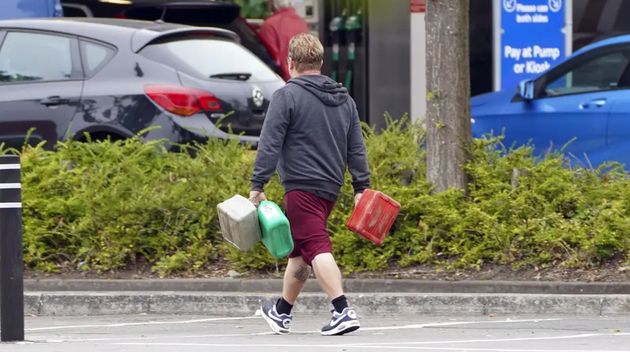 A motorist is said to have filled six cans of a total of 160 liters.

British motorists are storming petrol pumps equipped with storage containers as panic continues across the country.

High street retailer Halfords revealed that it had registered a 17-fold increase in the number of so-called “Jerry Cans” sold over the weekend compared to the same period a week earlier.

Container, used by motorists to store fuel, was the fourth most common search term on a retailer’s website.

It is legal to store 30 liters of petrol at home in a suitable metal or plastic container without notifying local authorities, although the Health and Safety Executive urges people not to store the fuel unless absolutely necessary.

Some people are clearly not heeding warnings on quantity and suitability of containers.

Despite many petrol stations rationing fuel to ensure that as many people as possible can fill their vehicles, Northern Echo A woman in Stockton, Teesside reported filling six cans totaling 160 liters at a cost of over £200.

Meanwhile, a senior Telegraph journalist tweeted about an extraordinary and unconfirmed scene in Hertfordshire.

Apparently a woman in St Albans has been seen filling petrol in a carrier bag. Jesus wept

Meanwhile, the fuel industry has said that the demand for petrol should return to normal levels in the coming days.

In a joint statement, major suppliers including BP, Esso and Shell said with many cars now carrying more petrol than usual the pressure at stations should begin to ease.

Earlier Boris Johnson backed down from implementing plans to send troops to the forecourt to deliver fuel because Downing Street insisted there was “enough” supplies.

In their joint statement, the industry urged drivers to return to normal buying patterns.

“There is a lot of fuel in the UK’s refineries and terminals, and as an industry we are working closely with the government to ensure that fuel is made available at stations across the country.”

‘The Matrix Resurrections’: Keanu Reeves ‘Was Blown Away’ by the Film and Had an ‘Incredibly Insightful’ Reaction, Director Said