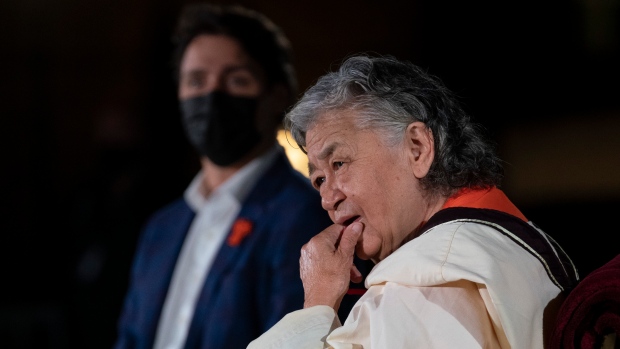 TORONTO – Residential school survivors across the country are sharing their stories ahead of Thursday’s National Truth and Reconciliation Day.

Several survivors spoke to a crowd of hundreds on Parliament Hill on Wednesday and discussed the horror they experienced in the residential school system.

“We were made to feel we weren’t good enough,” said Inuk elder Levina Brown.

“As a nation we can change our story, for my fellow survivors I want you to know that I love you.”

Thursday is the first National Day for Truth and Reconciliation, a new federal holiday that honors lost children and survivors of residential schools, their families, and their communities.

Among the 94 calls to action from the Truth and Reconciliation Commission (TRC) was a federal holiday to commemorate the horrors of these men.

“It is my hope that 100 years from now our future generations will recognize this date as a milestone in healing the nation and bringing us closer to reconciliation,” said Jimmy Durocher, a Metis man and Ile-a- said the survivor of LA’s residential school. -Cross, Sask.

The residential school system in Canada operated between 1831 and 1996. They were designed to isolate the indigenous people from their culture and language, only to replace them with Christianity and the English language.

According to the TRC, about 150,000 Indigenous children were separated from their families and sent to these facilities, where 15,000 people died.

Despite the national holiday, several provinces, including Alberta, Saskatchewan, New Brunswick, Quebec and Ontario, have chosen not to recognize it, meaning that schools and provincial offices will remain open in these provinces.

At Cowes First Nation in southern Saskatchewan, where researchers discovered 751 unmarked graves at the site of a former Maryval residential school, community leaders will hold a community feast and pavé at the facility on September 30.

Cadmus Delorme, head of Cowesses First Nation, said the National Day for Truth and Reconciliation is an important step to better understand the pain and trauma of Canadians that many Indigenous peoples went through at these facilities.

“Recognizing this day is an investment in us and our children and yet unborn children, so that the truth remains that we will all be in a phase of reconciliation with days like this,” he said.

Delorme told Granthshala News that work is on to identify the children buried at the site, but he has already been able to identify about 300 of them and that markers will be created in the near future.

It is also important to spread education and awareness for this holiday. At Cowes Community Education Center, the local school in the area, students are taught about residential schools through craft projects and encouraged to wear orange shirts.

“(We) must learn about our history, about our true identity, and … what their grandparents must have endured so that they can learn to appreciate what we have here in our community ,” said Natasha Isaacs, principal of Cause’s Community Education Center.

Orange Shirt Day, also on 30 September, encourages people to wear an orange shirt and is inspired by the experiences of Phyllis Webstad, a Northern Secwpemc from Stswecem’c Xgat’tem First Nation, who took off an orange shirt. by the staff of the residential school on his first day of school.