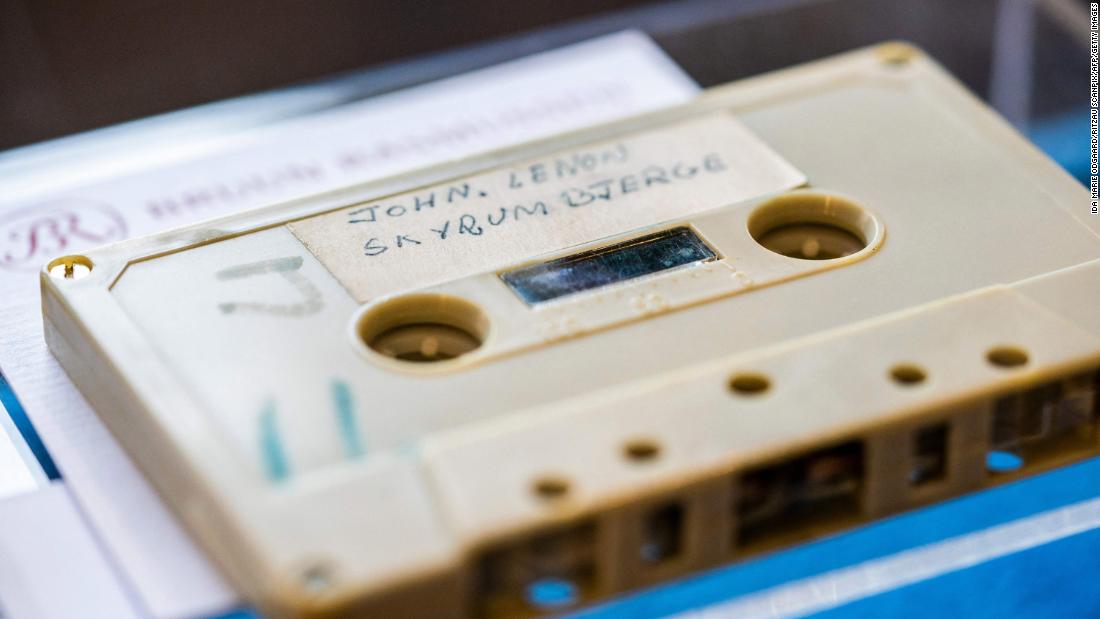 Between the sale of more than 100 paintings and sculptures at an auction in Copenhagen, Denmark, there’s an unlikely item of pop memorabilia: a long-lost tape featuring an unpublished John Lennon song.

white cassette expected to fetch up to 300,000 Danish krone ($47,000) in Tuesday’s sale ribbon It also features interviews with the Beatles singer and his wife Yoko Ono, along with a series of photographs from the 1970s.

According to auction house Brun Rasmussen, four interviewees, then 16-year-old school children, have put the tape up for sale 50 years after it was recorded. At the time, Lennon and Ono were visiting Tera in Jutland, Denmark, to resolve a custody dispute between Ono and her ex-husband over their daughter Kyoko, also shown in the photographs.

The auction house said that the four boys, who helped build their school magazine, were allowed to skip class in hopes of securing an interview with Lennon and Ono. On January 5, 1970, he was entered into a small press conference with a small group of journalists, where he asked about the peace movement and Lennon’s musical career. (At the time, Lennon was pursuing a solo career after the release of The Beatles’ “Abbey Road” a year earlier.)

The 33-minute recording also includes a quick performance when one of the boys asked Lennon if he could play something for them. The Beatles sang “Give Peace a Chance”, first performed at the pair’s famous “bed-in” protest in Montreal in 1969, before playing an unreleased song, “Radio Peace”.

The tape, which includes 33-minute interviews with John Lennon and Yoko Ono, as well as Polaroid photos taken by one of the schoolchildren. Credit: Ida Marie Odgaard / Ritzou Scanpix / AFP / Getty Images

The auction house said that “Radio Peace” could be “a kind of younger brother” to “give peace a chance”, inscribed with a proposed Amsterdam radio station of the same name. But the radio station never broadcast it and the song was never released.

Elsewhere in the recording, Carsten Hogen, one of the four young interviewees, can be heard asking what young people can do to champion the anti-war movement, to which Lennon and Ono promote messages of peace. Suggested use of giving posters and events. At one point, Lennon and Ono were even convinced to dance around the Christmas tree while everyone sang a Danish carol.

In photos taken by Hogen’s classmate, Jesper Jungersen, Lennon is seen with Ono wearing his iconic round glasses and long hair, all dressed in black. In another, the couple is seated on a red sofa with Kyoko in front of Christmas decorations.

“The experience was a great impact On our lives,” Hogen is quoted as saying on the auction listing: “At the time, we weren’t as busy with famous people as the youth of today. Instead, we saw John Lennon and Yoko Ono as some sort of political prophet and symbol of peace.

John Lennon and Yoko Ono in Denmark in 1970. The pair cut their hair after interviews with school children, where they were seen with long hair in photographs. Credit: Keystone-France/Gamma-Rafo/Getty Images

“We shared a common fate with them regarding music and progressive ideologies of peace. Two figures who shaped our generation and the entire anti-culture movement.”

In an apparent coincidence, another series of rare interview tape Featuring Lennon and Ono is also up for auction on Tuesday. Recorded in 1969 and 1970, the interviews – conducted by Canadian celebrity interviewer Ken Zillig rather than bright-eyed Danish teens – can fetch up to £30,000 ($41,000) when they go on sale in the UK.

Spanning 12 tapes and over 90 minutes, the recording delves into the behind-the-scenes details of “Abbey Road”, The War Is Over and Lennon’s protests against the execution of convicted murderer James Hanraty.

Most of the interviews are “unheard of before,” according to auction house Omega Auctions, which called the collection “a truly unique and inspiring collection of interviews[that]deserve to be heard by everyone who loves the Beatles and John Lennon.”