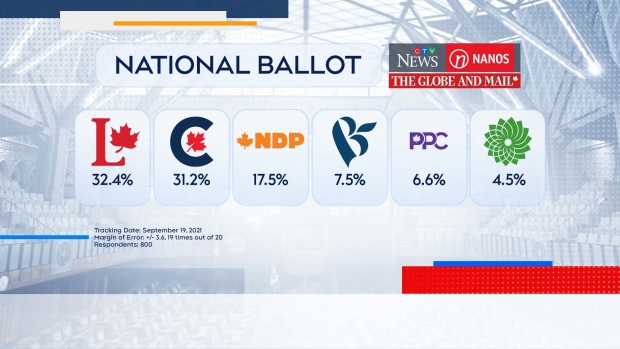 TORONTO – On the eve of Canada’s 44th federal election, the race between liberals and conservatives remains very close, while Liberal leader Justin Trudeau maintains his modest advantage over Conservative leader Erin O’Toole when it comes to preferred prime minister .

In a one-day sample of 800 Canadians conducted by Nano’s Research for Granthshala News and The Globe and Mail, liberals are at 32.4 percent, while conservatives lag behind at 31.2 percent.

The NDP remains in third place with 17.5 percent, while the bloc Québécois sits at 7.5 percent.

The People’s Party of Canada (PPC) is fifth with 6.6 percent and the Green Party is sixth with 4.5 percent support.

Nano Research conducted all the interviews for this survey on Sunday and released them late on Sunday night.

A national dual-frame (land + cell) random telephone survey is carried out at night by Nanos Research throughout the campaign using live agents. Each evening a new group of 400 eligible voters is interviewed (800 on 19 September). The daily tracking figures are based on a three-day rolling sample consisting of 1,600 interviews. To update the tracking a new day of interview is added and the oldest day is removed. The margin of error for the survey of 1,600 respondents is ±2.4 percentage points, which is 19 times out of 20.

The September 19 tracking is a one-day random sampling of 800 Canadians.