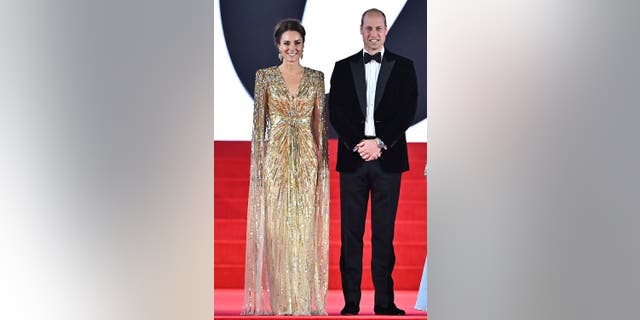 The Duke and Duchess of Cambridge were joined by Prince Charles and Camilla, Duchess of Cornwall, as well

Prince Williams and Kate Middleton looked stunning on the red carpet at the London premiere of “No Time to Die,” the latest James Bond film to hit theaters.

The Duke of Cambridge donned a traditional black, velvet tuxedo, while the Duchess of Cambridge turned heads in a gold, beaded Jenny Packham gown with a long, matching cape. She accessorised the ensemble with earrings from London-based company O’Nitaa and wore her hair in an intricate updo.

Joining the couple at the premiere were William’s father, Prince Charles, and his stepmother, Camilla, Duchess of Cornwall. She wore a light blue dress with sheer sleeves and beadwork.

The long-awaited event took place at the Royal Albert Hall in London and the stars of the film also stepped out for the special night.

“No Time to Die” sees 53-year-old Daniel Craig playing a British spy for the last time and is also the 25th film in the franchise.

Craig has played the killer in five films, starting with “Casino Royale” in 2006. Asked how he felt about saying goodbye to the role, Craig told reporters: “I’m good. I’m really good about it.”

Sedoux told reporters that he was relieved that the film would finally hit theaters after a delay of more than a year due to the pandemic. He said, “It’s been a very strange time for all of us. And now to celebrate, you know, to be reunited, with this film. And it’s great. I’m really happy.” ”

Health care workers and members of Britain’s armed forces were among those at Tuesday’s premiere to thank them for their work during the pandemic.

“No Time to Die” hits theaters in the US on October 8.