Pregnant women infected with COVID-19 are twice as likely to have a stillbirth and were at 50% increased risk of death during the Delta wave, CDC reports find 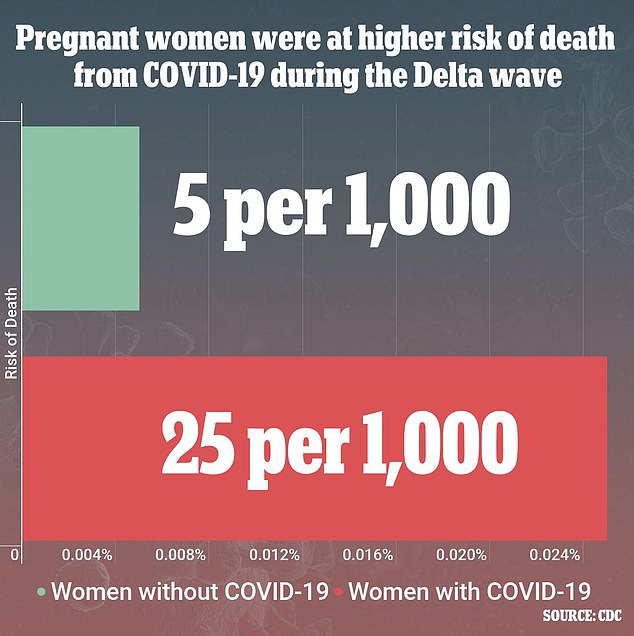 Pregnant women are at increased risk of serious complications from COVID-19 and they only increased during the delta-type wave, the Centers for Disease Control and Prevention (CDC) revealed.

The report, published by the agency on Friday, found that the rate of pregnant women dying from COVID-19 during the time, where the delta variant was the country’s dominant strain, rose five-fold.

Pre-delta, five out of every 1,000 pregnant women who contracted the virus during pregnancy died of a staggering 25 of every 1,000 during the delta period.

The researchers also found that pregnant women who were infected at birth were twice as likely to have a stillbirth.

Pregnant women were five times more likely to die from COVID-19, while the delta variant was the predominant strain compared to the previous months of the pandemic.

A CDC report has found that pregnant women who are infected with COVID-19 at the time of delivery are twice as likely to have a stillbirth than uninfected women.

They recorded 15 Covid-linked deaths among pregnant women in the state during the 19-month period, out of the total number of infections recorded at 1,637.

In the period before the delta, from March 2020 to June 2021, there were six deaths among pregnant women – or five out of every 1,000 infections.

The number rose sharply during the delta period from July to October 2021, which recorded nine deaths among pregnant women – or 25 per 1,000 infections.

Of the 15 women who died, 14 had an underlying medical condition that put them at an even greater risk of complications from the virus.

Three died during their pregnancy, leading to two stillbirths and one spontaneous abortion.

Seven women required an emergency C-section operation for their unborn child to survive, and 12 women died shortly after giving birth.

Twelve of the women were either black or Hispanic, highlighting Already disproportionate maternal mortality rate in the US

Separate report good Published Friday afternoon by the CDC examined the rate of stillbirths by pregnant women who were infected at the time of delivery.

The researchers collected data on 1.2 million births across the country from March 2020 to June 2021.

Stillbirth, when a baby dies at birth, is very rare, occurring in only 0.65 percent of women who are not infected with COVID.

Within the dataset, 21,653 women gave birth while being infected with COVID-19.

Of those women, 273 — or 1.26 percent — were twice as likely to have a stillbirth, with no live deliveries.

They were more common in the delta period, with 2.7 percent of women who gave birth while infected from July to September 2021 suffered a stillbirth – a fourfold increase compared to the 0.63 percent posted by uninfected women.

Infected women who suffered from high blood pressure, an adverse cardiac event or required ventilators due to COVID were most likely to have stillbirths.

The researchers write that these figures make vaccination against Kovid even more important for pregnant women.

‘Implementing evidence-based COVID-19 prevention strategies, including vaccination before or during pregnancy, is critical to reducing the impact of COVID-19,’ the researchers wrote.

Pregnant women in the United States are one of the least vaccinated demographics, of whom only 35 percent are fully vaccinated, according to CDC data,

For comparison, about 70 percent of American adults are fully vaccinated.