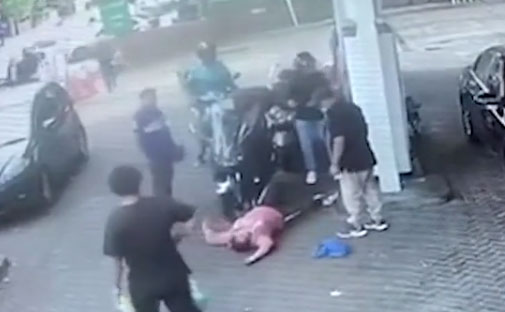 The boss of a petrol station said he was taken to the hospital after a moped thug attacked the forecourt and suffered a head injury following racial abuse.

Nerali Patel, 38, feared for her life when she claimed that a six-foot-tall man hit her in the face with a petrol tip and pushed her while repeatedly hitting her in a horrific attack in Belsize Park, North “P **I” said. London.

His head can be seen bouncing off the ground in CCTV footage taken at pumps amid Britain’s fuel chaos.

Passersby stepped in to prevent an attack on a 5ft 2in tall garage worker who was arrested as a man just before 2pm on Sunday.

Surprisingly, the attack took place less than two hours after Nerali was seen trying to break up a fight on the forecourt when one moped driver launched a flying kick at another.

Nerali, who serves David Beckham at BP station, said the rider turned violent after the petrol supply at her station was cut off.

Nerali of Croydon, south London, reported that the station was a designated site for priority fuel delivery to emergency service vehicles, known as a designated filling station.

He had asked his staff to shut down the station after the petrol ran out and when two moped riders reached his pump at around 1.30 pm, he had put bags on the petrol nozzle.

He said: “I had already put the bags on the nozzle to show that there was no petrol left in them.

hit me in the face with the other hand and pushed me and I fell right behind, hit my head and my hand was torn off

“I turned my back and I just said, ‘Listen, this is the last moped, he’s been waiting for half an hour’.

“He kept swearing at me. He grabbed the nozzle again and I explained to him that there’s no point in roughing with that nozzle because there’s nothing in the tanks.

“Then he put the nozzle on my face saying, ‘I get this, you f***ing p**i and hit my face with the other hand and pushed me and I fell right back, Hit me on the head and cut off my hand.

“The members of the public and the staff came and there was some scuffle, their bike had fallen, they then called the police saying that someone had pushed their bike.

“They just held him back because he kept on moving towards me when I woke up.”

Nerali, the mother of her twin five-year-old boy and girl, continued: “He hit me in the face first, it was with the nozzle. He just looked at a small Indian woman and she thought no matter what happened, I was taking fuel. Am.

“It was when he walked up to me with the nozzle, I thought, ‘That’s all, I have it now’, because that’s metal.

“It’s like a metal pole in his hand, at that point you wonder if he holds me the wrong way.”

The man was arrested a short time later – after he called the police after his bike was hit while being stopped by members of the public.

But on receiving information about the attack on Nerali, the police handcuffed him and put him in the police van.

He arrived just an hour and a half after he was seen wearing a pink top, trying to squabble with moped riders.

He said: “It was a very bad day. They were fighting among themselves because one of the mopeds had jumped in the queue.

“Other moped men stormed the forecourt to tackle him, and there was some scuffle.

“I tried to defuse the situation, as did my manager. One of the mopeds did a flying kick.”

Speaking this morning, she said that she was at work for more than 24 hours without sleep.

Last night around 11 pm a tanker arrived at the petrol station, in which the drivers used to come immediately to fill up and the workers were forced to work.

She said: “We have been working non-stop since Friday. We were on our way home for two hours of sleep and had to go back to work.

“It was stressful for us and we were not getting any happiness and were reluctant to put on the cap on Saturday.

“It was shocking to be honest with you. He was a grown man, he had a matchmate and it was just me, I wasn’t aggressive or rude.

“I went to A&E and they said ‘you don’t need stitches’.

“Maybe I had to shake, I vomited later and I’ve been having a very severe headache since yesterday.”

She was back at work on Monday to help her elderly parents Kirit, 72, and Penuka, 70, run the family business.

A spokesman for the Weather Police said: “Police were called at 13:48 on Sunday, 26 September following reports that a man had been attacked at a petrol station on Haverstock Hill, NW 3. Officers attended.

“No one was reported to be injured.

“A man was arrested on suspicion of assault and a racially aggravated public order offense. He has been released under investigation.

“Inquiries are on under the circumstances.”