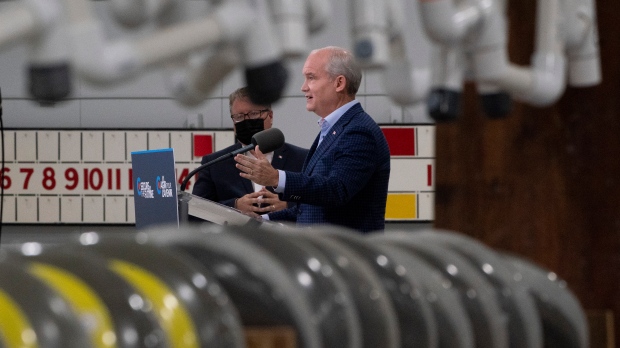 OTTAWA – Conservative leader Erin O’Toole declined to say on Thursday whether she still thinks Alberta Premier Jason Kenney has handled the pandemic better than the federal government, as the province is rapidly deteriorating COVID- 19 is facing the situation.

After Liberal Leader Justin Trudeau and NDP leader Jagmeet Singh both made face-to-face addresses about the newly announced restrictions in that province and Kenny on vaccine passports, O’Toole repeatedly deflected questions from reporters on the matter.

“During this crisis, all provinces have tried to strike a balance between making public health paramount and balancing economic needs. All provinces have been moved and adjusted based on various reasons,” O’Toole said while speaking at a curling club in St.

“But what the provinces don’t have is a consistent and reliable partner in Ottawa. Mr. Trudeau fights the people. I will fight for the Canadian people, and we will never let the Delta version take hold in Canada.”

O’Toole has spoken positively during the pandemic about how his former Harper-era cabinet colleague Kenny has handled the pandemic, and suggested his party could draw lessons from Alberta’s ongoing health crisis.

last fall, before the mass vaccination effort and Kenny lifted most COVID-19 restrictions in July, O’Toole said in a Video That “Premier Kenny has navigated this COVID-19 pandemic far better than the federal government.”

Asked on Thursday whether it was still his view, O’Toole prompted Trudeau to talk about calling a pandemic election and suggested that what Canadians are focusing on is in Alberta. There isn’t a rapid capacity ICU, but why is the country in a federal election campaign.

“So Canadians have to realize that this election is about a choice. The prime minister who ignored the delta version and called the election, a $600 million election, or someone who will make sure we are ready The plan is to ensure that we never again get caught slow and prepare for a pandemic,” he said.

On Wednesday evening, Kenny held a press conference where he apologized for his government’s approach to the pandemic and acknowledged that was the “wrong” path.

“I know we all hoped this summer that we could put COVID behind us once and for all, that was definitely my hope and I said it very clearly,” Kenny said.

“It’s clear now that we were wrong, and I apologize for that.”

Kenney declared a state of public health emergency as active COVID-19 cases exceed 18,000, the most of any province.

Kenny said 90 percent of patients in Alberta’s intensive care units have not been vaccinated. The province established a pandemic tally for the number of ICU admissions with 212 on Tuesday.

Speaking on the campaign trail in Montreal on Thursday, Trudeau said that while he is not in a position to judge Alberta’s approach to stopping the spread of COVID-19, the crisis is proof that “leadership matters. Is.”

The Liberal leader called the situation “heartbreaking” and said he has spoken to the clerk of the Privy Council to make sure the needs of the province are met as it grapples with a fourth wave.

“Ventilators are on the way. Whatever else we can do whether it is sending more medical professionals as we did in Ontario a few months ago when they were overwhelmed, we are going to make sure Albertans get support,” he said.

“I think what Canadians see in this is a matter of leadership at any level, the choices we make, who we choose to lead the government in times of crisis … that decides how we going to do it.”

Trudeau said he understood the concerns Canadians may have that “conservative politicians across this country are not being as effective in fighting this pandemic.”

“The question I have for people is ‘Do you really want Erin O’Toole sitting in front of them at the premiere table talking about how we end this pandemic when she herself -Can’t stand up for the Vaxxers in your own party?’” he said.

Singh said Kenny “did not show leadership” with regard to the pandemic and that an NDP government would consider all means available at the federal level to end the fourth wave.

He then blamed and blamed Trudeau for calling the election during the COVID-19 crisis.

“Mr. Trudeau called for an election in the midst of a fourth wave, an election that did not need to happen,” Singh said while speaking to reporters in Toronto.

With a file from Edmonton staff of Granthshala News