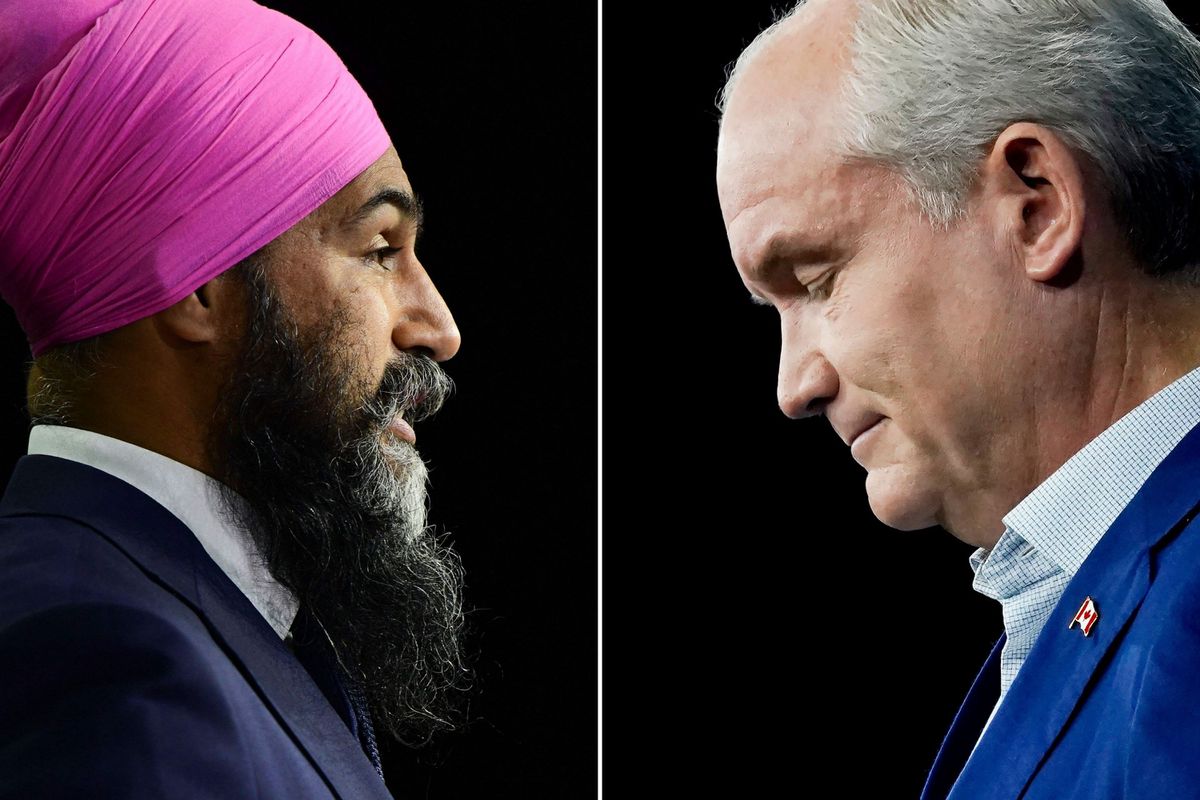 There were no winners – only varying degrees of losers – after Monday’s merry-go-round election, where each party emerged roughly in the same place it started.

The Liberals, fewer of the losers, managed to earn re-election, but this came at the cost of the pride and prestige of its leader, Justin Trudeau (not to mention a few hundred million in other expenses). Not only did Mr Trudeau fail to win a majority, which was apparently his motivation for calling the election, but the Liberals won by securing the lowest voting share for a governing party in Canadian history. It’s still in first place, but the party tore its pants and got stuck on an obstacle along the way.

There were big losers then. There is the Green Party, which had the worst results in terms of the popular vote in years. There is the People’s Party, which has made relatively substantial gains but will still have no representation in Ottawa. The bloc is Québécois, which failed to materially benefit from the stench raised over a question during the campaign’s English-language debate. One is the NDP, which did not find support for its big spending promises, which one might expect from a country still in the midst of a pandemic. And then there are the Conservatives, who entered Atlantic Canada and won the popular vote, but still failed to gain an advantage in the House.

Of all the defeated leaders, however, the knives are out for only one (with the exception of Green Leader Annie Paul, of course, whose party was sharpening its Heinkels even before the election): Conservative leader Erin O’Toole. .

The murmurs about a leadership review for Mr O’Toole have already begun. On Tuesday evening, a member of the party’s national council began circulating a petition calling for the Conservative leader to be recalled. And on election night, Conservative strategist Jenny Byrne – Stephen Harper’s former deputy chief of staff – lamented that Mr O’Toole had lost more “winnable” elections than in 2019 (a debatable issue, as the parties in one were statistical dead heat for the 2019 election, as opposed to the substantial voting leadership Mr Trudeau enjoyed as recently as August).

In theory Mr O’Toole and NDP leader Jagmeet Singh should be in the same boat. Both failed to channel national frustration over a pandemic election call and convert it into material support; Both gave tremendous results. But Mr Singh, who spearheaded a campaign that saw the party claiming 25 seats as of this writing – just one more than before – does not appear to be in immediate danger of losing his job.

The saga of former NDP leader Tom Mulcair, whom the NDP won 44 seats in 2015 (i.e. nearly 75 percent better than on Monday) conceded defeat to his party, explains this. While some of the dismay can be attributed to the coming down of Jack Layton’s “orange wave” four years ago, which polled a party-record 103 MPs, the discontent was actually due to the ways Mr. Mulcair pulled his party into an uncomfortable position. originated from. , the centrist direction: He promised tax cuts, to balance the budget and decriminalize — but not legalize — marijuana. Despite what was objectively still a great result for the party, Mr Mulcair’s continued leadership was seen as untenable. Mr Singh has now restored the party to a more comfortable ideological position, and although this may have had the effect that the NDP was relegated to fourth party status, the member served as a progressive influence in the minority parliament. Appear to be satisfied – simply because NDP values ​​remain intact in the long run.

In this most recent election campaign, Mr. O’Toole effectively pulled off a Mulcair, but quite the opposite: he dragged his party to the center, himself a pro-LGBTQ ally, flip-flopping on guns, making huge spending promises. Huey, pulled at the center, launching a carbon pricing scheme, and even saying it would allow provinces to keep the current liberal carbon tax. And he did it all after pulling a bait-and-switch, turning party members to support his “true blue” leadership campaign and then turning purple during the federal election campaign.

Of course, all would have been forgiven if the Conservatives had indeed won the election, or even if Mr O’Toole had markedly increased his party’s representation in the House. But for all their flip-flops on carbon taxes and progressive talks on myriad social issues, conservatives got nothing. Indeed, both Mr. O’Toole and Mr. Singh failed to meaningfully increase the support of their parties in this election, but only Mr. O’Toole betrayed his party’s principles in the process. That’s why the Conservatives are firing at him.

Is it fair to field Mr O’Toole after just one election – especially one where the Conservatives started so far behind, and where they were thrown a wrench with the deteriorating COVID-19 conditions in Conservative-run provinces There was another debate. But the chill in the air in Conservative circles nonetheless presents a clear message for Mr. O’Toole, and it is what Mr. Mulcair learned years ago: If you are going to change the ideological direction of your party, you better win.