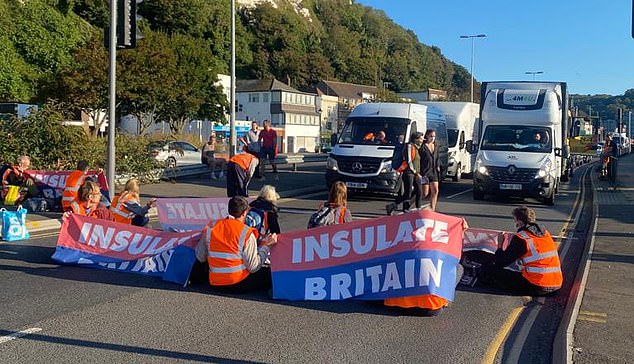 Insulate Britain protesters have blocked roads at the Port of Dover – mocking Priti Patel’s injunction against them.

More than 40 activists from two groups have blocked the A20 road in Kent that provides access to the Port of Dover.

The port is the busiest ferry port in Europe and the UK’s main gateway for trade from the European Union. The protests have come amid a growing supply crisis.

An eco-zealot also climbed atop a tanker and refused to come down, despite being an indication that he had been arrested four times before.

Insulate Britain has closed parts of the M25 motorway around London five times a week to force the government to insulate and retrofit homes across the UK to cut climate emissions.

The move, which has led to the arrest of hundreds of people, has sparked an angry reaction in some quarters.

The government has successfully applied to the High Court for an order that bars anyone from blocking the M25, with those breaking the prohibition facing up to two years in prison or an unlimited fine.

However, the group appeared to mock the prohibition order by blocking traffic at the Port of Dover this morning.

A spokesman for Insulate Britain said the group, which wants the government to insulate and retrofit homes across the UK, blocked Europe’s busiest ferry port on Friday morning.

He said: ‘We are blocking Dover this morning to highlight that fuel poverty is killing people in Dover and across the UK.

‘We need a Churchillian response: we must tell the truth about the immediate magnitude of the climate emergency. Change at the required speed and scale requires economic disruption.

‘We wish it wasn’t true, but it is. This is why the fuel protests of 2000 got a U-turn in policy and made Blair his biggest challenge as Prime Minister.

Protest group Insulate Britain says more than 40 supporters of the two groups have blocked the A20 road in Kent that provides access to the Port of Dover.

Access to the port by the group was blocked with an ambulance, which also appears to have been closed.

The spokesman said: ‘We are sorry for the disruption we are causing. This appears to be the only way to put the issue of insulation on the agenda and draw attention to how poorly insulated homes are causing poor health, misery and early death for many thousands of people.

‘We are failing the country’s cold starved families and the elderly and placing a heavy burden on the NHS.

‘Insulating our leaky homes is one of the most cost-effective ways to reduce carbon emissions and has all these additional benefits – reducing fuel poverty, creating jobs, reducing the burden on the NHS and helping people Protecting against overheating during future heat waves. It’s a no-brainer. Boris just needs to go to work.