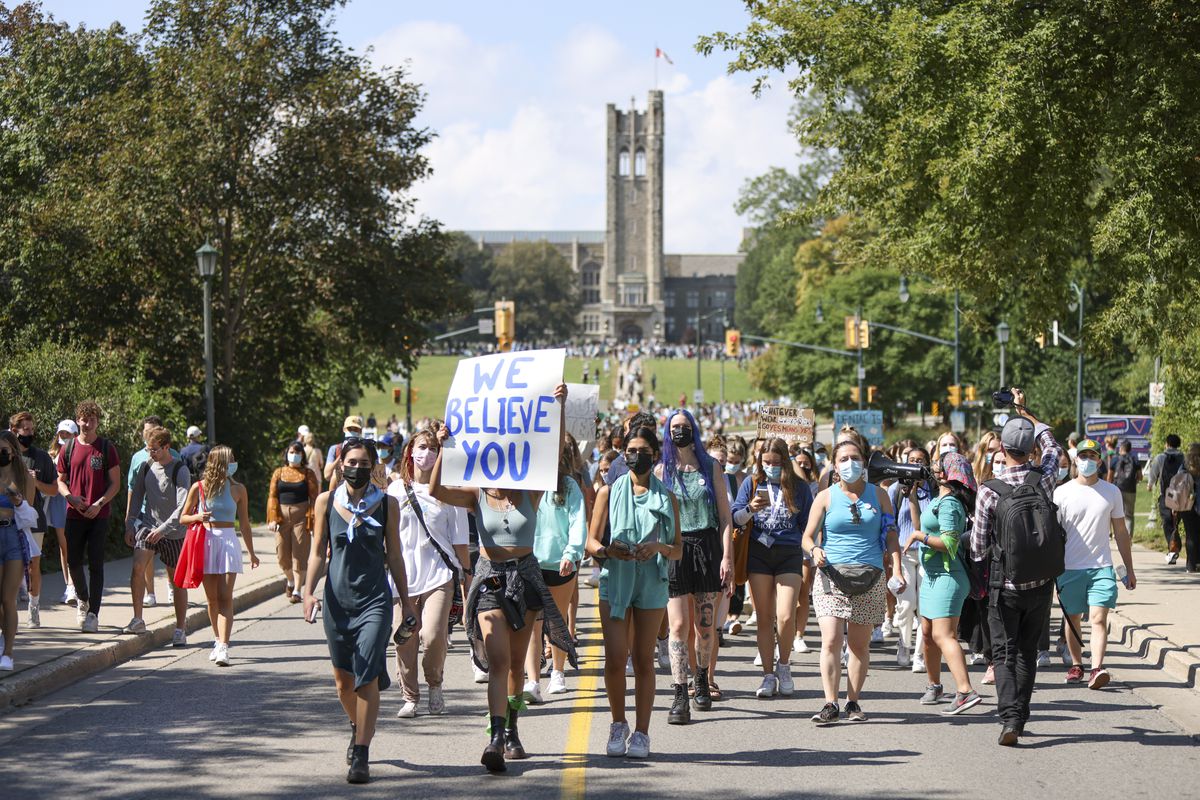 Thousands of students pulled out of classes at the University of Western Ontario on Friday to protest recent incidents of sexual violence and campus culture they say put students at risk.

The crowd on the university lawn in London, Ont., was estimated at more than 10,000. They stood in the sun for more than two hours listening to speeches, including speeches by survivors of sexual assault.

Asia Walzac, a fourth-year history student, joined the crowd on Friday. He said he hoped that a large number of students had sent out the message that western countries needed a change in culture.

“Anyone you talk to here, they have either been personally – or know of – someone who has been attacked or harassed,” Ms Walzak said.

The walkout comes less than a week after social media alleged that several students were drugged and some sexually assaulted during the final days of orientation week at Western’s Medway-Sydenham Hall residence. London Police launched an investigation into the reports, but they say they have yet to receive any information. Separately, police received four complaints of sexual assault not linked to the Western student residence, resulting in one arrest and no charges, although the investigation is ongoing.

“It is unfortunate that what has happened this weekend and in the past few weeks should be something that has forced our hand,” Ms Walzak said. “But it is time for a change in how we deal with sexual assault and how we prevent it.”

One of the speakers was student leader and Red Zone research team member Tegan Elliott, who researches sexual violence during the first few months of university, a time of intense exposure.

“There is a problem in the Western Region that is not going away,” Ms Elliot told the crowd. “Western, you have no excuse left. Your students are not safe here. You are putting them in danger, and we should not be here to protest our basic human rights.

Western President Alan Shepard was in the crowd, but did not speak at the event. Earlier this week, Dr. Shepard said that there is a culture problem at the university that needs to be addressed. He insisted that the university is not the huge party that some think, especially in the first weeks of his term. He announced security patrols, more campus policing and compulsory training for all students on sexual violence and consent. The university said the training is expected to begin next week and will eventually be compulsory for all students.

Angela Van Damme, the mother of a first-year student at Western Dr. Shepard in what he called the university’s “pervasive culture of toxic masculinity.”

Ms Van Damme did not participate in the demonstration, but appreciated the leadership shown by the students, which she called the opposite of the backward approach of university administrators. He said that trust in the institution has been lost and it needs to be restored. He pointed to specific steps the university would take to make reporting of sexual violence easier and clearer, the need for better supervision from higher-year students, and signage for students to remind each other of their responsibilities. .

“I am deeply disappointed by this kind of bureaucratic response and dereliction of responsibility,” Ms Van Damme said. He said the university is trying to change the story by coming out in support of the student’s walkout, but more needs to be done to address their concerns. He said that he paid thousands of dollars to the university, some of it specifically for student life and student safety, and said that if the university saw itself as a business, it should recognize that it The product it is selling is defective.

A group of over 25 students from Western and its affiliated colleges organized the walkout. Their aim was to show support for the survivors and to call on the university to take steps to protect students from sexual assault.

Ian Rae, a professor of literature at King’s University College, was one of the many faculty members present to show his support.

“[I] Hear students are worried – they are scared, they are justifiably angry.” Prof Rai said. “My impression is that they are much ahead on this in activism and information-gathering than administration.”

The crowd also held a moment of silence for first-year student Gabriel Neal, who died last week after being violently attacked near campus. A small memorial has been erected at the major intersection of Western Road and Sarania Road, where Mr. Neel was attacked.

Kudlow: Biden has no interest in economic growth