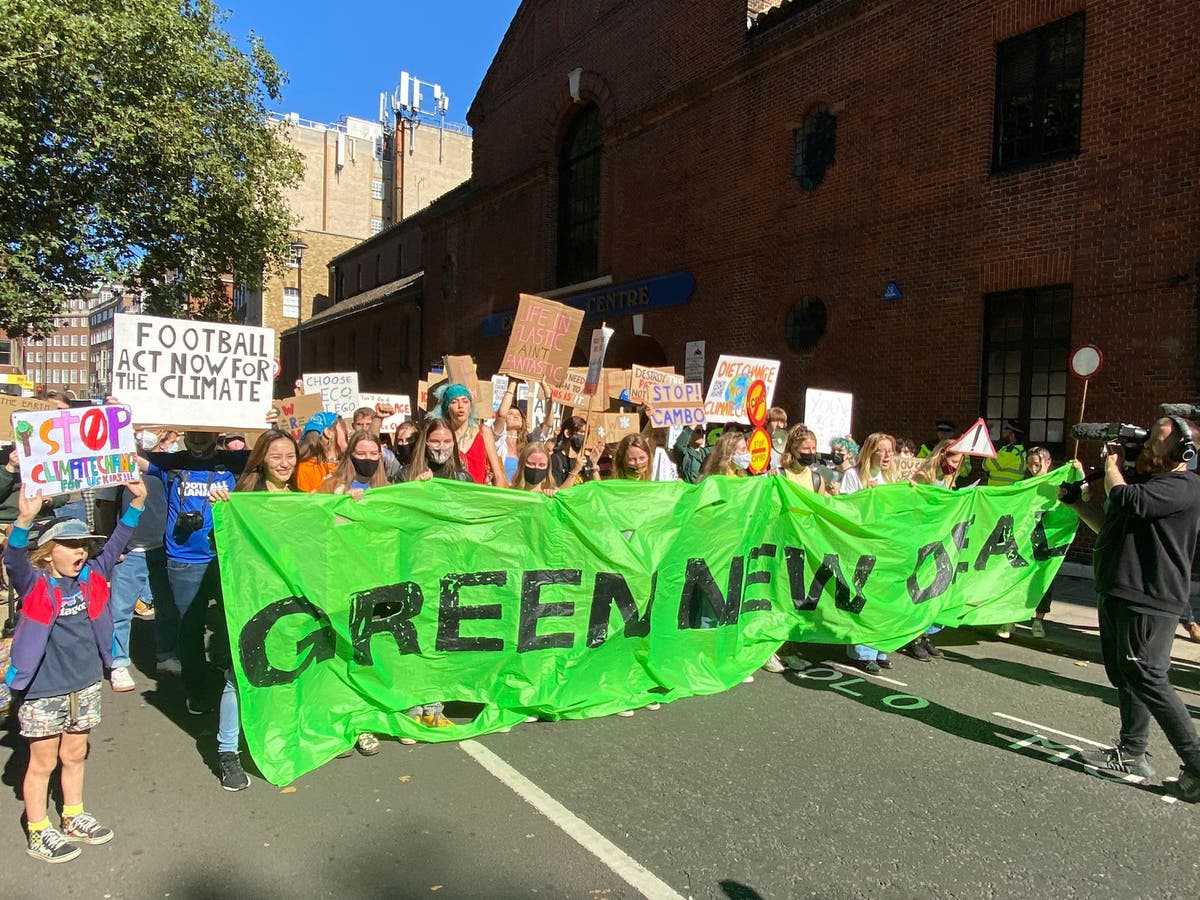 More than 200 protesters gathered in London’s Parliament Square on Friday to demand government action on the climate crisis. The protest was organized as part of a series of similar events around the world, planned as a global “climate strike” inspired by a Swedish teenager.

Protesters, many of them young people leaving school, marched through Westminster to call for an abandonment of fossil fuels and a more effective response to the global emergency.

Addressing a crowd of young protesters, Mr Corbyn said the Cop26 summit in Glasgow in November would be a “week-long festival of greenwash” if climate change is not voiced.

His comments were met with cheers from the crowd as he insisted that environmental politics was no different from the rest of society, and that the poorest people in the world and in society were most affected by the consequences of climate change.

Ms Whittom told protesters that “individual action” would not solve the climate crisis.

“There should no longer be greenwashing, fossil fuels must remain in the ground, our energy must be 100 percent renewable, and the destruction of our forests must end,” she said. “We literally cannot continue to live on a planet in a society that puts profits before planets and people.”

After speeches in Parliament Square, protesters marched through Westminster shouting slogans: “Whose streets? Our streets!” and blocking traffic on the route, which was heavily policed ​​all day.

‘Government is not listening’

Becky Truscott, who joined the protest with her two children – one of whom was missing from school to participate – said the government should focus on climate action.

“Boris Johnson gave a great speech in America yesterday. What he is saying in his articles as a journalist is the complete opposite,” said Ms. Truscott. “But what is going on behind the scenes is Knowing that, I question how much belief is behind it. You are calling on developing countries to break away from fossil fuels, but you are not cleaning up your act in your country.

Ms Truscott’s 12-year-old daughter, May, said: “What is more important, a day of school or trying to convince our government that we need it to keep our planet healthy and alive?”

Ms Truscott, who has four children, said her 12-year-old daughter was a “hardworking student” who would catch the schoolwork she was missing, but it was important to be in the ranks of protesters demanding a better future . .

“I think we need more representation here; the government isn’t really listening to what we need to do. I don’t think there are enough people here who are standing up for themselves and raising their voices,” I said.

Cop26 will see leaders from countries around the world discuss ways to tackle the factors that contribute to the climate emergency.

Old protesters also participated in the demonstration and called upon the government to take action.

Grandparents and elders of Extinction Rebellion members said they stand in solidarity with the young people.

“We want to show that we care about the future of the youth, because the government just isn’t acting quickly enough. We’re here as a presence saying that not enough is being done,” said grandparents. Mary-Anne told Granthshala.

Eliza McKenzie-Jackson, 17, one of the organizers of the school strikes, toldGranthshala That the Friday for Future Movement is a “lifeline to the planet”.

The teenager said she had directed her efforts to find solutions to environmental problems after becoming depressed about the climate crisis.

The Climate School Strike Movement was started by Ms Thunberg, who staged a protest outside the Swedish parliament. The movement has now spread around the world, prompting young people around the world to demand government action on climate change.