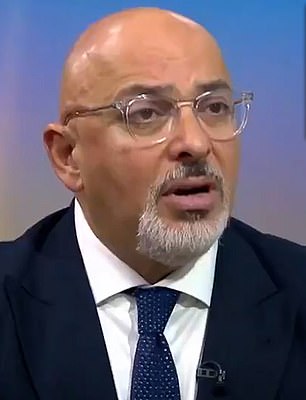 The Education Secretary acknowledged today that face masks could be brought back to schools this winter to prevent the spread of the coronavirus.

The saying that all children should wear coverings in classrooms and corridors was removed in mid-May as part of No10’s campaign to learn to live with the virus.

But ministers have made contingency plans in the event of a rapid increase in cases among students.

He stressed that his priority was to ‘protect education’ and keep schools open.

Meanwhile, Mr Zahvi also said he does not want to bring back bubbles, which saw entire classes and year groups sent home if a child tested positive.

The original coronavirus-fighting measures deployed in English schools contributed to 1.1 million children being stuck at home during the most disruptive days of the COVID pandemic.

Ministers said dropping face masks would improve interactions between teachers and students, while eliminating bubbles would reduce disruption to education.

Compulsory wearing of face coverings in schools and colleges was abolished in May. Some worried that the masks hindered learning, but others warned they were necessary to suppress the outbreak. Pictured: Children wearing facemasks at Outwood Academy in Doncaster, Yorkshire in March

Government guidance published in August said some measures could be rolled back to manage local outbreaks, respond to types of anxiety or prevent the NHS from being overwhelmed.

Local health chiefs can implement measures in response to the outbreak.

Face masks are already in use in schools in the South West, Cumbria and parts of Northamptonshire.

But current restrictions only require school children to test themselves for the virus twice a week using a lateral flow device.

Britain’s slowdown in Covid cases may be the end, official data suggested yesterday as daily infections rose for the first time in a week.

Hospitalizations also rose 1.1 per cent to 666 on Saturday, the latest date for which data is available. This was the first time in 20 days that the number of daily admissions had increased week-on-week.

But the death toll continues to fall within 28 days of a positive test, with 143 deaths recorded today. Deaths were down 4.7 percent from the 150 recorded last Wednesday, the twelfth day in a row that the number of victims fell week-on-week.

This comes after separate official figures revealed today that nearly a fifth of people in Blackburn have tested positive for Covid since the pandemic began.

The Lancashire Authority has been the most affected area in the UK, recording 12 times more cases per population size than the least affected parts of the UK.

Data from the Department of Health shows that around 19,000 people per 100,000 people have had the virus in Blackburn since March 2020, compared to just 1,500 in Scotland’s Orkney Islands.

Cases among children have reached record highs since going back to schools, with 1.5 per cent of youth aged 10 to 14 testing positive in the week ending October 1.

However, government figures show that infections among children have started to decline in the recent four days.

Speaking to Sky News, Mr Jahvi said: ‘Thanks to the wonderful teachers and support staff and the parents and the children – 99 percent of the schools are open.

‘Attendance has gone up, the last set of figures I saw was around 90 per cent, which obviously will fluctuate depending on the infection rate.

‘But my priority is to protect education, keep those schools open.’

But Mr Jahavi revealed he didn’t want to go back to the bubble system to do so, ‘because really, you saw a drop in attendance that really hurts the mental health, the mental health of the kids.

However, he did not rule out the return of wearing masks to class in England.

He said: ‘We have a contingency plan, as you would expect me to do… There are a lot of contingencies, including masks, of course.’

Mr Jahavi also confirmed that 300,000 carbon dioxide monitors would be in schools by November after supply problems slowed the roll out.

The machines work by detecting the amount of CO2 in the air, high levels indicating that the space has poor ventilation, which can encourage the virus to spread.

The school staff can then take actions such as opening doors and windows to increase ventilation.

Mr Jahavi said: ‘They are going out by the end of this month. We’ll have a real uplift in schools in those numbers, really significant.

‘We are also looking at ventilation, and how do we make sure schools have access to ventilation.’

Along with the machines, ministers are relying on COVID jobs for 12 to 15-year-olds to quell the expected fourth wave this winter.

Mr Jahavi, previously No 10 Vaccine Minister, told Times Radio: ‘I haven’t looked at take-up rates and I’m about to have a meeting with my old team.

‘So I’ll take a look at the figures but the good news in universities is touching 90 per cent.’

‘There’s a lag because obviously you have to get consent forms, they have to come back and then the school, along with the school-age immunization practitioners, decide they have enough students (and) parents. …