Mothers of premature babies are more than TWICE as likely to develop high blood pressure within a decade of giving birth, study claims 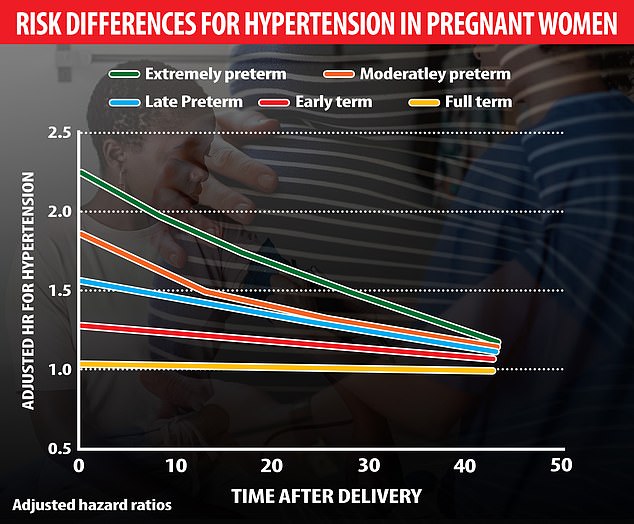 A major study claims that mothers of premature babies are more than twice as likely to have high blood pressure.

Experts say the findings mean physicians should now consider premature labor in women as a ‘lifelong’ risk factor for high blood pressure and later heart disease, such as heart attack and stroke.

The study tracked more than 2 million Swedish women for nearly 45 years, allowing researchers to explore both the immediate and long-term risk of high blood pressure after birth.

The results showed that women who gave birth prematurely were 67 percent more likely to have high blood pressure after a decade.

A study of more than 2 million pregnant women in Sweden found that women who were born prematurely had a higher risk of developing high blood pressure in the coming years. As this chart shows, the risk was higher for women who gave birth to extremely premature babies, those born between 22 and 27 weeks. The risk of hypertension was also highest in the 10 years following birth but was still present 40 years after birth. High blood pressure is a major risk factor for heart disease

Premature births account for about 10 per cent of all births in the UK and US. Researchers say the new findings should prompt physicians to consider women’s reproductive history when assessing heart disease risk

All figures compared to full-term births (between 39-41 weeks)

About one in 10 births in the UK and US are premature, which is classified as occurring before the 37th week of pregnancy.

The study showed that women who had given birth earlier had a higher risk of developing high blood pressure.

Mothers who gave birth as early as 22 weeks – which is a fortnight before the UK abortion cut-off – were more than twice as likely to have high blood pressure.

But the risk was only 26 percent for women who gave birth after more than 37 or 38 weeks.

All groups were compared to women who delivered their baby to full term between 39 and 41 weeks.

The researchers, led by Dr. Casey Crump at the Icahn School of Medicine, also found that the risk of high blood pressure continued for more than 40 years.

They calculated that for each additional week of pregnancy, after the 22nd week, there was an average 3 percent lower risk of high blood pressure.

Scientists are still unclear why women who have premature babies have a higher risk of high blood pressure.

All figures compared to full-term births (between 39-41 weeks)

However recent studies have shown that premature labor can trigger inflammation of a thin membrane that lines the heart and blood vessels called the endothelium.

Inflammation of the endothelium may be a contributing factor to the development of hypertension and cardiovascular diseases.

Data from fewer than 2.2 million women who gave birth in Sweden between 1970 and 2015 were used in the study, which was published in JAMA Cardiology.

Of these, only over 350,000 women developed high blood pressure, which was 16 percent of the total.

The study only measured women who only gave birth to one child at a time. Why

“Cardiovascular risk assessment in women should routinely include reproductive history including preterm delivery and other adverse pregnancy outcomes,” he said.

‘A history of premature labor may help identify women at high risk of hypertension and heart disease long before the onset of these conditions.’

Crump said blood pressure monitoring via wearable technology could be an intervention for preterm mothers at high risk of hypertension.

Heart disease is the biggest killer of women in the UK, with 24,000 women dying from the disease each year. It is also the leading cause of female death in the US, with 300,000 female deaths annually.

The researchers were confident in their findings because they accounted for other factors that could lead to high blood pressure.

They were able to trace genetics and lifestyle factors through an analysis of the siblings of the women in the study.

Although they acknowledged other limitations such as a lack of ability to verify the accuracy of hypertension, women were diagnosed through the Swedish medical system due to a lack of clinical data.

There are also some limitations based on technological changes in reporting pregnancy duration in the late 1970s/80s and the different cut-off points for the diagnosis of hypertension, although these were considered minor limitations by the authors.

This study is the latest on the health risks to women from premature birth by the same authors.

In August last year, and using the same data set, the authors found that women who gave birth to a premature baby were more likely to die at a younger age than other mothers.

Explained: Premature birth and its risks for babies

Around 10 percent of pregnancies worldwide result in premature…