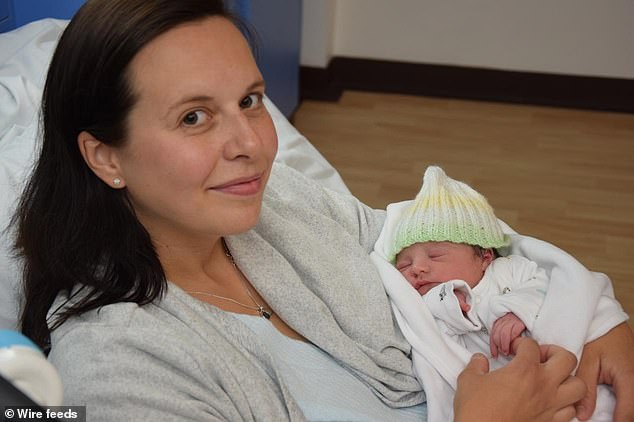 A mother in Newcastle has become the first person in the UK to use a climate-friendly pain reliever while giving birth.

Entonox — better known as gas and air — has been used to ease pain during labor for more than a century.

The drug is a mixture of oxygen and nitrous oxide, a potent greenhouse gas that is 300 times more potent than carbon dioxide. After exhaling it goes into the atmosphere.

In a British first, Kaja Gersinka used a new device that turns exhaled nitrous oxide into harmless nitrogen and oxygen.

She used a Mobile Destruction Unit (MDU) when giving birth to her daughter, Rosie Martha O’Sullivan, on September 9, who weighed 6lb 6oz.

Kaja Gersinka, with her daughter Rosie, who was born on Thursday at Newcastle Birthing Centre, was the first person in the UK to use a climate-friendly pain relief device called a Mobile Destruction Unit.

Ms Gersinka said: ‘I didn’t expect it when I came here today – I had just come to have my baby – but I started on the traditional machine and then switched to it.’

Ms Gersinka, whose age is unknown, said: ‘I didn’t expect it when I came here – I’ve just come to have my baby.

‘But I started on the traditional machine and then swapped that out.

How does a Mobile Destruction Unit work?

Gas and air – known medically as entonox – have been used for more than a century to manage pain during childbirth.

But it does contain a mixture of nitrous oxide and oxygen, which are potent greenhouse gases that escape into the atmosphere after mothers exhale using pain relievers.

More than 99 percent of the nitrous oxide it collects is then converted into harmless oxygen and nitrogen – the main components of the air we breathe.

It does this by heating the nitrous oxide to a point that it dissociates.

‘It was quieter and a lot more comfortable to hold – it’s good to make a little history.’

Developed by a Swedish firm, MDU works by purifying the nitrous oxide that patients release into it.

The machine does this by heating the nitrous oxide to such an extent that it breaks down.

Rosie, who was given birth by midwife Lindsay Cranny, is the second child of Ms Gersinka and her partner, Craig O’Sullivan.

They already have a two year old daughter named Kaisi.

As well as being greener, the technology – developed by Swedish environmental health care company MedClear – also benefits employees by reducing the amount of nitrous oxide they are exposed to while working.

Chris Allen from Newcastle Hospitals NHS Foundation Trust said: ‘Implementing this technology in our obstetric unit can help us continue to support women to use gas and air during childbirth, while making it as environmentally friendly as possible. can be adapted.

‘We have ambitious plans to become a global leader in sustainable healthcare delivery, and introducing such innovative technology can help us achieve that.’

MedClear Chief Executive Jonas Lund said: ‘Working in the green MedTech area I have been extremely impressed with the NHS Newcastle team, I have never seen such a display of action on the fact that there is a global climate crisis as we saw in Newcastle.

‘We are delighted to be a supplier of trust and we look forward to producing Rosie’s generation in a climate-friendly manner.’