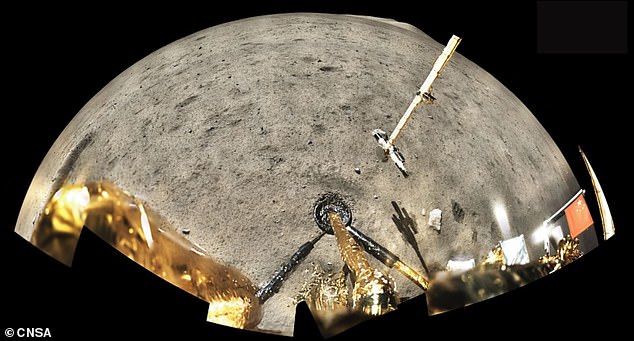 A new study shows that moon rocks were returned 2 billion years ago by the Chang’e-5 mission in December last year.

An analysis of lunar rocks in Beijing, led by the Chinese Academy of Geological Sciences, shows that the Moon was volcanically active more recently than expected.

According to the researchers, the samples are 1 billion years younger than those previously found on the Moon.

China brought back the first fresh samples of rock and debris from the Moon in more than 40 years last December.

The Chinese space agency’s Chang’e-5 mission was launched from the Wenchang spacecraft launch site on Hainan island of China on November 23, 2020.

It landed on the Moon on 1 December, collected approximately 1,731 g (61.1 oz) of lunar samples and returned to Earth on 16 December.

Chang’e 5 landing site overview. The mission landed at Oceanus Procellarum, a field of solidified lava from an ancient volcanic eruption

The probe targeted a 4,265-foot-high volcanic complex called Mons Rumkar near the Moon, an area known as Oceanus Procellarum, which is Latin for Ocean of Storms.

According to the Chinese space authority, Chang’e-7 will study the land surface, composition, space environment in a composite mission, while Chang’e-8 will focus on technical surface analysis.

China is also reportedly working on building a lunar base and sending future crewed missions to the surface using 3D printing technology.

Chang’e-8 will likely lay the groundwork for this as it attempts to verify the technology for the project.

The agency also launched a mission to Mars in the summer of 2020 and landed a rover on the Red Planet in May 2021.

This new age determination is one of the first scientific results reported from the successful Chang’e-5 mission.

‘In this study, we got a very precise age of about 2 billion years, plus or minus 50 million years,’ said study author Brad Joliff, director of Washington University’s McDonnell Center for the Space Sciences.

‘This is an unprecedented result. In terms of planetary timings, this is a very accurate determination.

‘And it is good enough to distinguish between different sources of chronology.’

The Moon itself is about 4.5 billion years old, almost as old as Earth.

But unlike Earth, the Moon doesn’t have the erosive or mountain-building process that eroded craters over the years.

Scientists have taken advantage of permanent craters to develop methods to estimate the age of different regions on the Moon’s surface.

‘But to put full age dates on that, samples have to be taken from those surfaces.’

Between 1969 and 1972, NASA’s six Apollo missions brought back 382 kilograms (842 pounds) of lunar rocks, core samples, pebbles, sand and dust from the lunar surface.

“All the volcanic rocks collected by Apollo were more than 3 billion years old,” Joliff said.

‘And all young impact craters whose ages have been determined from the analysis of samples are less than 1 billion years old. So the Chang’e-5 samples fill an important gap.’

China shared a look at the first samples of the Moon, which were to be brought back to Earth more than 45 years ago in February 2021, just months after they returned

The Chinese Chang’e-5 probe landed in Siziwang District at 1:30 a.m. local time on December 17, bringing samples of lunar soil back to Earth. The picture is a view taken by Search Helicopter

The Chang’e-5 mission – the first lunar sample return since 1970 – landed in Oceanus Procellarum, a field of solidified lava from an ancient volcanic eruption.

It collected samples from the surface and returned them to Earth for laboratory analysis.

“The laboratory in Beijing where the new analyzes were conducted is one of the best in the world, and they have done an exceptional job characterizing and analyzing the volcanic rock samples,” Joliff said.

According to the findings, rocks formed from magma erupted later than other known volcanic lunar samples, about 2 billion years ago.

The authors state that the heat must have been a source of heat in the region to explain this late volcanic activity.

However, there is no evidence of high concentrations of heat-generating radioactive elements in the Moon’s deep mantle, which had previously been suggested as the cause of magma eruptions, so there must be an alternative explanation.

One possibility is tidal heating – the frictional heating of a satellite’s core due to the gravitational pull of its parent planet and possibly neighboring satellites.

According to the team, the age of the samples will help test the crater-counting technique used for dating planetary surfaces.

The study is published today in the journal Science.

What was the Apollo program?