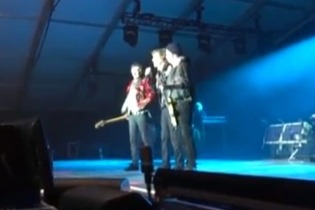 Mick Jagger shed tears and dedicated his return to the stage to The Rolling Stones legend Charlie Watts.

Performing for the first time since the accidental death of the 80-year-old drummer last month, the rock star turned emotional as he paid tribute.

The Rolling Stones performed a private gig at Gillette Stadium in Massachusetts as they began their US tour on Monday night.

Sharing a video from the event, Jagger turned away as he honored his bandmate in front of an intimate crowd.

Almost drowned in cheers, he said: “This is the first show of our 2021 tour, so there it is.

“I must say, at this point, it’s a touching night for us because it’s our first tour in 59 years without our dear Charlie Watts. And we all miss Charlie dearly.

“I hope you remember him like we do, so we want to dedicate this show to Charlie.”

The star then raised a bottle while shouting: “To Charlie!”

Overcome, Mick said: “Now what are we going to do… now I’m totally emotional…”

An insider said that his death on August 24 came as a “huge blow” to his bandmates, when things took an “unexpected turn”.

He added: “Everyone in and around the band is really devastated.”
Charlie, who died in a London hospital, was universally recognized as the Stones’ quiet linchpin.

The Stones said in a statement: “It is with great sadness that we announce the death of our dear Charlie Watts.

“He passed away peacefully surrounded by his family in a London hospital earlier today.

“Charlie was a cherished husband, father and grandfather and one of the greatest drummers of his generation as a member of the Rolling Stones.”