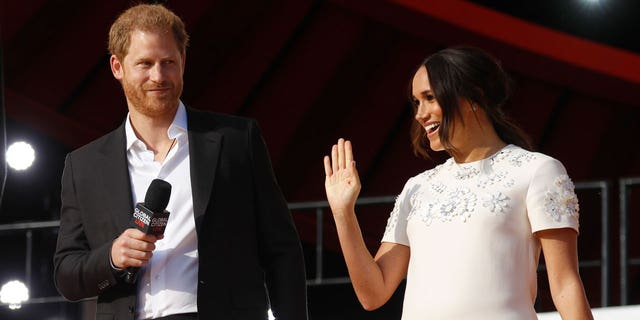 Markle said during the appearance, ‘Every single person on this planet has a fundamental right to receive this vaccine.

Meghan Markle and Prince Harry advocate for coronavirus vaccine equity during an appearance at the Global Citizen Live event in New York City on Saturday.

Markle, 40, emphasized that billions of people around the world do not have access to a coronavirus vaccine during her remarks.

“Every single person on this planet has a fundamental right to receive this vaccine. That’s the point, but it’s not happening,” Markle said.via People magazine.)

“And in this country and many others, you can go almost anywhere and get vaccinated, billions of people around the world can’t,” she continued. “This year, every single country in the world is expected to produce enough doses to meet the goal of immunizing 70% of people. And not everyone else. It’s not okay.”

“Guys, we have what we need to vaccinate the world, but experts tell us, here’s what’s getting in the way,” Harry said. “He said many countries are ready to make vaccines at home, yet they are not allowed, because ultra-wealthy pharmaceutical companies are not sharing recipes for making them.”

“These countries have the means, the capacity, and the workers to start manufacturing. They are just waiting for vaccine intellectual property to be waived and vaccine technology to be transferred. And by the way, many of these vaccines were publicly funded. . They are your vaccines, you paid for them.”

Prince Harry and Markle’s appearance was part of a 24-hour event to highlight the lack of vaccine equity. The Global Citizen Live event called on G7 countries and the European Union to pledge access to at least one billion vaccines, covering those with the most need.

The royal couple also requested that independent international organizations be allowed to determine which countries are most in need.

Markle and Prince Harry have made several appearances throughout their time in NYC. Markle appeared on Friday at a Harlem-area elementary school where she read her children’s book “The Bench” to school children.

The couple made their first appearance on Thursday at the One World Trade Center Observatory in NYC, where they met New York Governor Cathy Hochulu And Major Bill de Blasio.