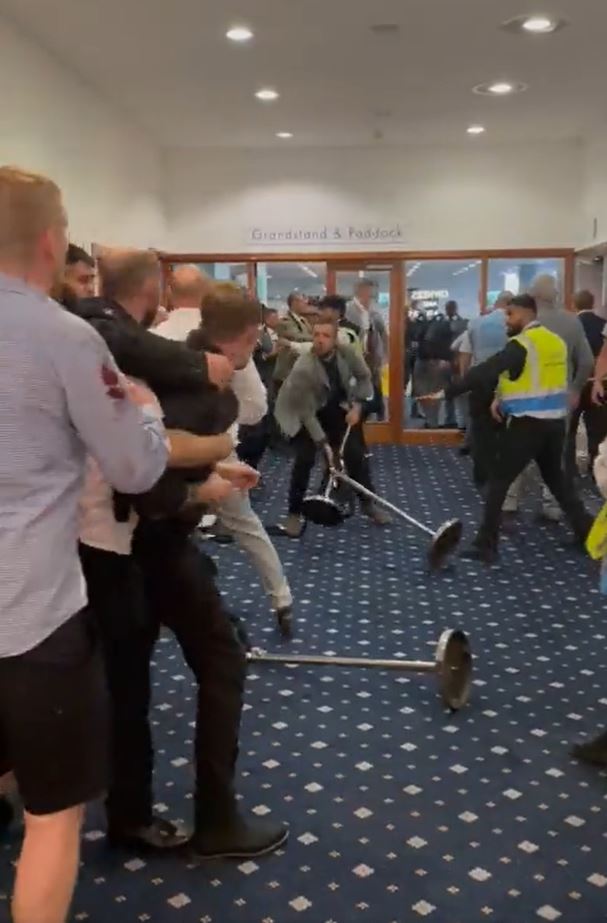 A mass brawl erupts as ‘disgusting thugs’ scrap with each other and security at Newmarket Racecourse.

During the fierce 20-minute scuffle, the bodies fell to the floor as a man lifted a table to be used as a weapon.

One man walks in with blood on his shirt and another is seen trying to punch a security guard.

A shocked racegoer records the horrific brawl and slams the ‘disgusting thug’ for ruining people’s day.

The fight began in the betting ring on Saturday, where legendary jockey Jamie Spencer won the big race of the day on a 40-1 outsider Bedouin story.

Unusual scenes then spread to one of the racecourse bars.

Reports claim that a man was later seen ‘with a cloth over his head and blood on the back of his shirt’.

Security eventually succeeded in breaking up the fight.

The woman who filmed the brawl and posted it online said: “First trip to Newmarket in two years, and these idiots ruined a family day.

“The fight started in the betting ring and then spread to the O&T bar.

“Poor security staff, and the racegoers who had to see it!

“Dirty thugs who shouldn’t be allowed on the racecourse again!

“It lasted 20 minutes and was clearly ripening at first, it wasn’t dealt with quickly. People were using furniture as weapons.”

No arrests were made and a Newmarket Racecourse spokesperson said: “After the racing ended there was a distinct disturbance, which was quickly dealt with by security.

“The matter was referred to Suffolk Police because such behavior is unacceptable.

Jockey Rosie Margerson – who won fans over with ‘the best interview ever’ – said the behavior of some on the course made her ‘nervous’.

While the person filming the fight said: “There just isn’t enough protection to control them all.

“In the betting ring it looked too crappy from the front. Disgusting, despicable creatures. Everyone needs to be banned for life!”

This is the second fight in so many months to reach an English racecourse.

A 26-year-old man was arrested on suspicion of actual bodily harm and possession of cocaine during a scrap at Goodwood in August.

Six required medical treatment after a fierce fight at the same racecourse in 2018.