Manitoba woman learns she was a part of the ’60s Scoop, decades later 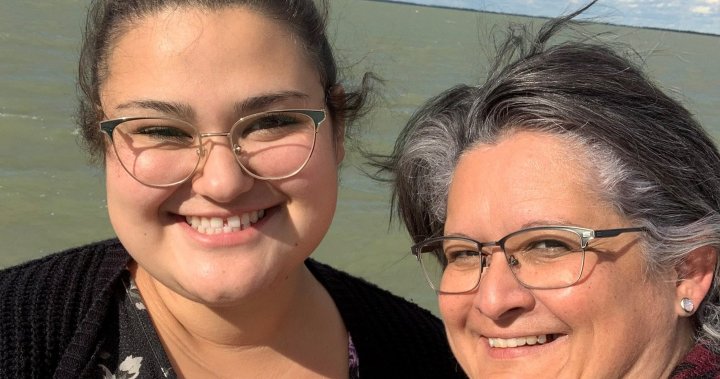 Fifty-one-year-old Lori-Ann Lucas made a discovery that filled a void she says she has long wanted to fill in her life.

“I always felt a little isolated and I could never put my finger on it. I just knew there was something — I was, but I wasn’t.

Lucas is adopted. Three months ago she began searching for her birth family.

She searched his adoption papers, which also contained the name of his birth mother. Using social media, she posted papers online and sought help in connecting her with relatives.

“When the first came over and they told me how we related, I literally got down on my knees and started crying and I went, ‘These are the pieces I’m missing.’”

He finds out he is the Ojibwe and is from the Eb and Flow First Nation along with dozens of family members in the prairie.

But her biggest discovery: She was part of the ’60s scoop.

Lucas says she eventually reconnected with an older sister, who shared her last memory when she was about a year old.

“She remembers us having kids hiding in a closet and holding me. We’re guessing about six months. And she was holding me, trying to keep me quiet,” Lucas said.

“Then she remembers the screams and screams of her grandmother and she opens the door. And Grandma had a baseball bat and was trying to fight them. He doesn’t understand what is happening, fight with whoever was trying to break into the house. And unfortunately, that was the day they found us.”

Lucas was raised in a white family and was later adopted by his current family. Ever since she finds out that she also has two older brothers, one is dead, the other she is missing.

It is estimated that in the 1960s about 20,000 Indigenous children were taken from their families to assimilate into Western culture.

While researching the family history of her birth, she is engaged to a distant cousin, Rose Lacquet, who she says is guiding her in rediscovering her culture.

“It’s going to be okay. I was so nervous about meeting him. And when you get that first hug, it’s okay. Quite exciting. It’s… it’s love,” Lucas said for the first time between the two. About to meet.

“We just hugged and he cried and cried. It was mutual feeling. After all he has that connection, she knew who she was now,” Lacquet says.

Laquette, Lucas, and their daughter traveled to Beacon Ridge and the Ebb and Flow First Nations to visit their late parents’ home and learn more about their culture.

“She kept asking me, ‘Will they accept me? Laquette said. “I had to keep convincing her to find her identity, which was really important to her.”

When they Ab and Flow arrive at First Nation, Lucas says it was a surreal moment.

Lucas said, “The first word a lot of them said is, ‘Welcome home,’ and I know it doesn’t mean much to others, but it’s great to hear that.”

After visiting the community, she says she found an old rusty handwashing basin—a gift she believes was meant to be brought back home and to keep as a small memory of her biological family.

Lucas says that the hardest part of his journey to reclaim his legacy has been to forgive.

“I’m lucky and I’m not going to ruin that fate,” she says, speaking of her adoptive parents, and noting that not many children have had similar experiences.

She says this is just the beginning of her journey to reclaim her legacy.

“I guess it’s part of my calling now, start talking, start speaking, start taking a stand, educate, encourage. We’re all here for a purpose, and I think that’s my motives.” is one of them.”

‘No Time to Die’: Ana de Armas Admits She Needed Help to Look Like She ‘Knew What She Was Doing’ Filming Classic James Bond Stunts