Life on Mars? Six astronauts are spending four weeks on a fake ‘Red Planet’ in Israel’s Negev Desert to prepare for future missions 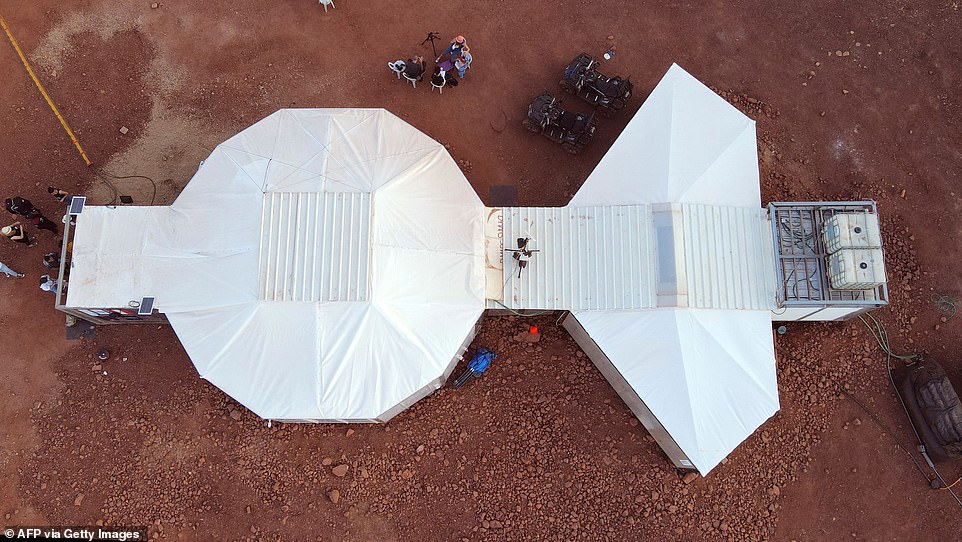 Half a dozen astronauts will spend the next four weeks pretending to be on Mars, living in a simulated version of the Red Planet in Israel’s Negev desert.

The mission will help provide scientists with information on how humans cope with limited and unusual conditions, such as they might experience on Mars.

While the crew, equipment and accommodations are in Israel, hosted by the Israel Space Agency, they will all be managed by ‘Mission Control’ at the Austrian Space Forum facility in Innsbruck, Austria.

The latest simulation is known as AMADEE-20 and will see five men and one woman spend four weeks at an Earth-based Mars analog facility, wearing spacesuits and even piloting a rover when they step outside.

This is the 13th ‘Analog Astronaut’ mission operated by the Austrian Space Forum, a network of aerospace engineers and space enthusiasts building the technology and processes needed for future crewed missions to Mars.

The crew will spend four weeks in and around this Mars-compliant habitat, which is designed to be similar in layout and function to what real astronauts will experience when they visit Mars in the future.

Robert Wilde, a physicist and first responder, wears his space gear during media day, before he, and five others go into isolation for the next four weeks.

Some analog astronauts from Europe and a team from Israel walk in spacesuits during a training mission to Mars at a location that simulates an off-site station at the Ramon Crater at Mitzpe Ramon in Israel’s southern Negev desert. Is.

It is not just the human experience being tested in the desert, as the crew will also simulate a range of human-robotic Mars surface activities.

These analogs have ‘evolved into an efficient tool for developing exploration mission architecture’, according to the Austrian Space Forum, which is leading the mission.

“They help understand the advantages and limitations of future manned planetary missions,” the agency said in a statement.

They are an ‘added value’ to the development of remote science operations, and help scientists understand barriers and opportunities.

The isolation phase begins today and the crew will be confined and will only be able to chat to mission control until they are released on October 31.

In a secluded environment, the crew will conduct a variety of experiments, from testing locks and sensors to human-interaction, on behalf of universities around the world.

A human experiment was designed by Goldsmiths University in London called ‘Acceptance and Commitment Therapy’.

The experiment is taking place in Israel’s Negev desert, where rock formations and red clay can be seen by future astronauts on Mars.

Missions will include drones, such as those being conducted by Robert Wilde, and rovers will mimic movement and exploration.

This is not just a test of human experience in the desert, as the crew will also simulate a range of human-robotic Mars surface activities, including wearing a spacesuit, such as it being set up by a technician.

It is a mindfulness technique based on behavioral science, which is hoped to provide a long-duration space crew with the ability to cope in confined environments.

It aims to mirror the real-world experience of future Martian astronauts as closely as possible, including sending them on a spacecraft, as would be the case on Mars.

This is to protect them from the harsh atmosphere, freezing temperatures, lack of a breathable atmosphere and solar radiation on the Red Planet.

The crew will be supported by a mission support center in Austria, which simulates a ‘ground segment’ of a real Mars mission.

The crew, including Commander Joao Lusada (pictured left), will investigate all aspects of life in a Mars-like setup.

They will have the ability to control fully automated rovers, and give mission control a chance to see how humans and robotics interact

Rovers will be similar to those that could be deployed to Mars in the future with a crewed mission, allowing astronauts to explore further.

Terrence J Gets Emotional About a Cause that Hits Home