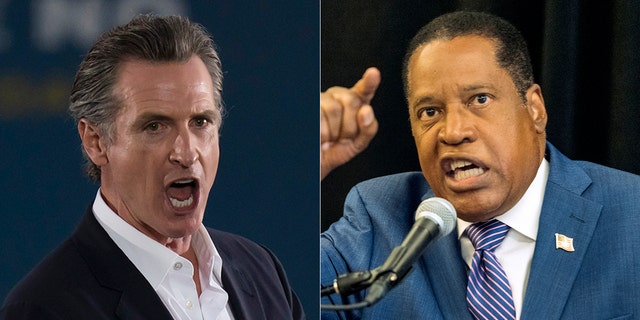 Los Angeles Times The editorial board celebrated Democratic California Governor Gavin Newsom’s victory on Wednesday, writing that it was a “sigh of relief” that “extremist, intolerant” Larry Elder would not replace him.

“Oh. After months of worrying about the fate of California, we’ll sleep easy now that Gov. Gavin Newsom won’t be removed from office early and replaced by right-wing provocateur Larry Elder, a radio host who has been known to have no one in the alternative office. experience and are not interested in becoming governor for all Californians—only those who share their extremist, intolerant views,” the board wrote.

With a reported 68% of the vote, the “no” votes on Newsom’s recall pushed the “yes” votes from 64% to 36%, an easy victory for the moderate Democrats in the face of several crises across their state, including hard times. -Hitting effects included. The coronavirus pandemic, massive wildfires, rising crime rates and the growing problem of homelessness.

However, The Times sought to absolve Newsom of its responsibility in fixing the issues plaguing California, calling the blame “smokescreen” from supporters of its recall.

Voters apparently watched through the smokescreen as supporters of the recall spoke about how Newsom was responsible for everything bad that happened in California over the years: wildfires, COVID-19, homelessness, crime. , income equality, and so on,” it wrote.

The Times board did not hide its disdain for the recall’s efforts, and its columnist roster consistently blasted Elder at one point. publish a piece Referring to him as “the black face of white supremacy”. It explicitly seeks to downplay a racially charged attack on the Elder by a woman wearing a gorilla mask.

“The decision to decline the recall is the best outcome for California. Even if you dislike Newsom, the state’s leadership has to vote for Elder or any of the other 45 people listed on the replacement ballot. It would have been a disaster for him. In the middle of a public health crisis and with regular elections a little over a year away,” it added.

The board described Newsom as “a strong leader” during the challenges faced by California in recent years, and claimed it would be wrong to replace him through “cynical moves”.

“It’s unfortunate that taxpayers had to spend between $200 million and $400 million to hold the election, which didn’t change anything. But it could pay off down the road if it convinces the state’s Republicans that the recall’s purpose.” It is not an appropriate, respectful – or even effective – way to win office,” the board wrote.

It added that if California Republicans wanted to end the one-party rule of the state’s Democrats, they would have to adjust their policies to appeal to more voters. However, it noted that the fact that the recall process took it beyond the signing stage “highlighted a deep ambivalence by Californians regarding the direction of the state,” and that millions still sought to oust Newsom. Voted for.