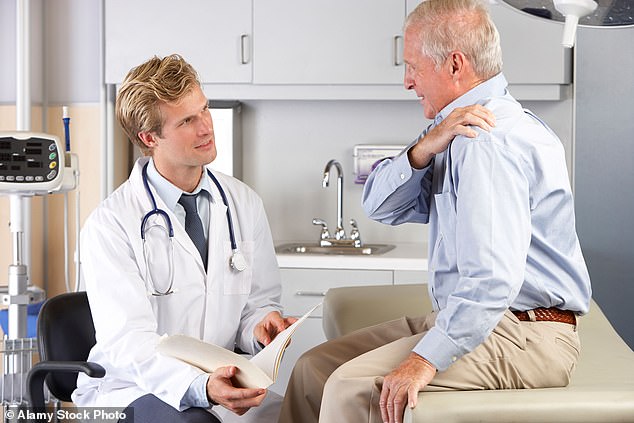 He claimed he had ‘no choice’ but to vote on industrial action to reduce the amount of work required for family doctors.

Last week Health Secretary Sajid Javid unveiled a nine-point package to help patients, telling GPs they can only refuse individual counseling if there is a good clinical reason.

But the BMA last night directed all 6,600 GP practices to disregard the proposals – a move described by campaigners as ‘a kick in the teeth’. The union said doctors should refuse to participate in the ‘naming and shaming’ of GP surgeries that fail to see enough patients in person.

Doctors threatened industrial action last night in a dramatic escalation over face-to-face appointments, described as ‘kicking in the teeth for millions of patients’ (stock image)

As well as refusing to comply with the government’s new measures, the BMA’s GP committee endorsed industrial action on two specific requirements in its new contract.

They plan to have members vote whether GPs should refuse to comply with the new rules on ‘transparency payments’, meaning those earning more than £150,000 are nominated.

GPs will also be voted on whether they should refuse monitoring medical exemptions for people who cannot get vaccinated, which doctors say increases their workload.

The threat of industrial action represents the first major clash between the BMA and ministers since the junior doctors’ strike five years ago. Patient groups warned that the ‘provocative move’ risked putting the NHS in deep trouble, leaving millions stuck on record waiting lists.

The Granthshala is campaigning for the return of face-to-face GP appointments as the move to online appointments during the pandemic has led to missed diseases including cancer.

Before the pandemic, 80 per cent of the appointments were in person. But now it has come down to just 57 percent.

Last week the government unveiled a £250 million aid package as part of a nine-point plan to ensure all patients can see a doctor in person if they wish.

But at a meeting yesterday, the BMA’s GP committee formally rejected the measures and encouraged doctors not to follow the ‘worst aspects’ of the plan.

Last week Health Secretary Sajid Javid (pictured) unveiled a nine-point package to help patients, telling GPs they can only refuse individual consultations if there is a clinical reason.

Committee chairman Dr Richard Voutray said: ‘The GP is left with no choice but to take this action. All efforts to persuade the government to launch a workable scheme that will bring immediate and long-term improvements for doctors and their patients have so far failed.

‘The government has completely ignored our requests for bureaucracy reduction so that we can focus more on patient care, and so we are encouraging doctors to step out of this bureaucracy.’

The BMA is calling on the government to negotiate a new contract that reduces their workload and provides more funding. But Denise Reid of patient campaign group Silver Voices said: ‘It seems patients have been forgotten in this tasteless battle.

‘If doctors take industrial action it will be patients who suffer and end up as collateral damage.

‘This latest enhancement from the BMA is a very immature stamp of the feet, and a kick in the teeth for the millions of patients who just want to see their GP in person.

‘I would urge both sides to round the table and settle this in mature discussions. Waiting lists, patients and A&E are bound to be impacted if doctors continue to work.

‘This provocative move is the last need of the NHS at this time. Sajid Javid has to take hold of the situation.

But at a meeting yesterday the BMA’s GP committee formally rejected the measures and encouraged doctors not to follow the ‘worst aspects’ of the plan, with committee chairman Dr Richard Voutray (pictured), GP is left with ‘no’ option

The move came as a report by the health watchdog concluded that some patients have been excluded from critical care as a result of being turned away from face-to-face GP appointments. The Care Quality Commission said remote counseling has meant that over the past year ‘some people have struggled to find the appointments they need’, especially the elderly and the disabled. The report said digital services have been “beneficial to many”, but others found video and online appointments to be “disappointing”.

It added: ‘Findings of our inspections noted issues with the telephone system resulting in long stops, people disconnected while waiting, and repeated attempts to pass through engaged voices. It’s frustrating for the people doing it.

‘Some people have told us that they felt they had to advocate for their own care, for example pursuing referral requests, prescription requests or discussing with the receptionist why they needed an appointment. Many times people have felt that their concerns or symptoms are not being taken seriously. Some of the people who saw a GP told us they couldn’t see their favorite professional or weren’t offered a face-to-face appointment.’

A Department of Health and Social Care spokesperson said: ‘We want patients to be able to see their GP immediately and in the way they choose. Our plan would be…