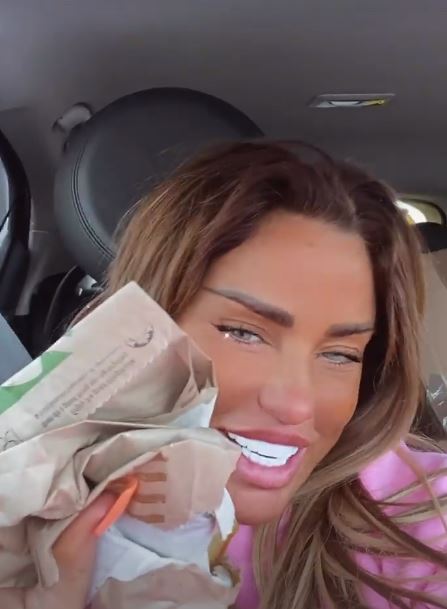 Katy Price showed she’s already feeling festive as she sang along to the Home Alone soundtrack during a Carpool Karaoke session with her sister Sophie.

The 43-year-old took to her Instagram Stories on Sunday to show her followers the “Christmas spirit” as she enjoyed a cheese and ham toastie from Starbucks.

Katie said: “We’re getting into the Christmas spirit, we ain’t sof… I love the track Home Alone.”

Her sister attempted to sing along to the famous song in Home Alone, but admitted that the words were wrong.

Katie claimed she had “no talent,” as she shared a classic clip of her singing A Whole New World, which she originally recorded with her ex-husband Peter Andre.

Katie had a little fun this morning as she shared a hilarious meme of her infamous singing skills, which read: “Katie Price has no talent. Oh yeah so please explain it.”

She captioned the clip: “One more for your morning commute. Have a good day!”

Katie and Peter released a cover of A Whole New World in 2006 as part of their duet album.

All proceeds from the album, A Whole New World, went to a chosen charity related to the multiple health conditions of Katie’s eldest son, Harvey.

The album debuted at #20 in the UK Albums Chart and achieved platinum status, but critics said it sounded like a “battle of the cats” at the time.

Since then, Katie, who had previously attempted to represent the UK at Eurovision in 2005, desperately tried to resume her pop career.

In 2010, he released a single called Free to Love Again, which peaked at number 60 in the charts.

And she tried again in 2017 with her single I Got You, but again with little success.

She admitted at the time that she had little support for her musical dreams – and even her manager didn’t want her to resume her pop career.

Her last effort was in 2020 with a track called Heartbroken.