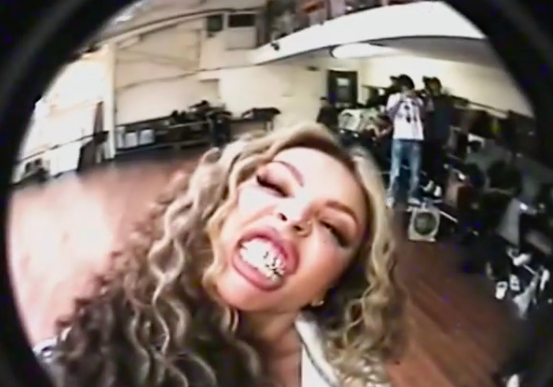 Jesy Nelson has given fans the first hearing of American sensation Nicki Minaj on her debut single, Boyz.

The former Little Mix star teased her followers with a new video clip that featured her at a dance rehearsal surrounded by an all-male troupe.

As she puts out her best moves, a man’s voice can be heard softly saying: “You can’t stop me, I like Bad Boys for life.”

Then suddenly, as Jesse turns the camera to himself for a close-up selfie—which sees him rocking a set of teeth grills—rapper Nicky’s voice can be heard.

“Yo… it’s UK baddie and the Barbie,” the star also chants. One of Nicky’s alter-egos is Harajuku Barbie.

Although Jessie’s own voice can’t be heard in the teaser clip, fans are in for the footage, as it finally confirms that Nicky has collaborated with her for it.

“I can’t cope …. I’m losing my head!” One of Jesse’s followers commented.

Another wrote on his Instagram page, “No way omg I’m screaming.”

Only hours after Jesse’s video came out she indicated that “something starting with B” was on the way.

In white writing on a black background with an eye emoji, Jessie said: “I spy with my little eye, beginning with …..B!!!!!!” originates from.

The 30-year-old star, who left Little Mix in December, was supposed to perform with Nicki at the MTV VMAs in New York earlier this month.

But when Nikki pulled out, Jesse was unable to attend.

A source said at the time: “Jesse and Nikki were in talks to perform Boyz at the VMAs and Jesse went to the US exclusively.

“However, Nicky is now out, meaning the idea is now in the bin and Jesse’s big reveal has been pushed back even further.

“The single is still being finalized and is still expected to be out later this month.”