‘It hurts my heart’: Vancouver nurse says she was target of racist remarks during anti-vaccine card rally 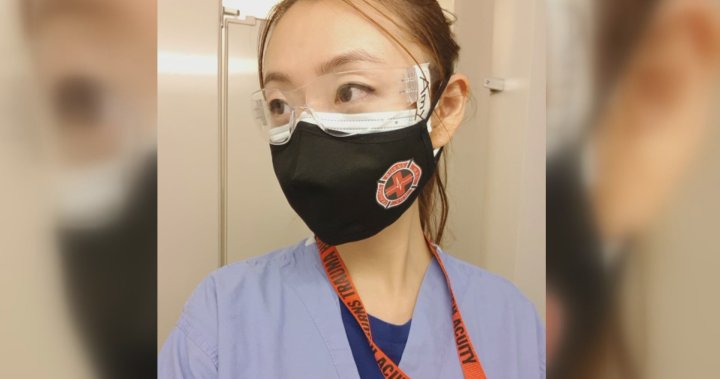 A Vancouver nurse says she was the target of an anti-Asian verbal attack during a rally to protest B.C.’s Vaccine Card program.

Amy Huang was downtown recently after being shifted to Vancouver General Hospital.

She said that she was visiting a friend amid a challenging time at work who saw her taking care of a COVID-19 patient whose condition had worsened.

“I don’t know if (they) are going to make it or not. So it was very emotional (timing) for me,” she said.

As she walked to visit a friend at the Wedgwood Hotel, she noticed a so-called “freedom rally” taking place outside the Vancouver Art Gallery.

“I took a sharp left and I tried to get away from that madness,” Huang recalled.

As she waited outside the hotel, she saw what he said was an “anti-vaccine conspiracy poster” on a car and decided to take her down.

“I don’t know if it was just a feeling of frustration or irritation over the past few months, but I wanted to take that poster down.”

Huang said the driver then got out of the car and made racist remarks.

“I’ve never talked to anyone like this before. It hurts my heart to know that there are people out there who believe that I am a foreigner just by looking at me. I’m not from here.”

Police have seen a rise in anti-Asian racism amid the COVID-19 pandemic. Last year, Vancouver police reported a 717 percent increase in hate crimes against East Asians from 2019 to 2020.

Vancouver police said there were no arrests or major issues related to the protest, although traffic was disrupted.

“I wish I hadn’t even tried to include them in the first place,” she said. “But you have to understand that it is very disappointing for me to see this as a nurse, because we work hard day and night to keep these patients alive. And then here they are on the streets.”

Huang said health care aides are exhausted as they work through a pandemic that seems to never end. Recent protests outside BC hospitals have made the situation worse.

“We are feeling extremely demoralized,” she said. “We are feeling so humiliated. It feels like a slap in the face. After working so hard for the past year and a half, endangering my physical, spiritual and mental health, putting myself and my family in danger, Taking the risk of virus infection – it just sounds outrageous.

“It’s taking a toll on all of us physically, emotionally and spiritually, but we try our best.”

— With files by Kamil Karmali