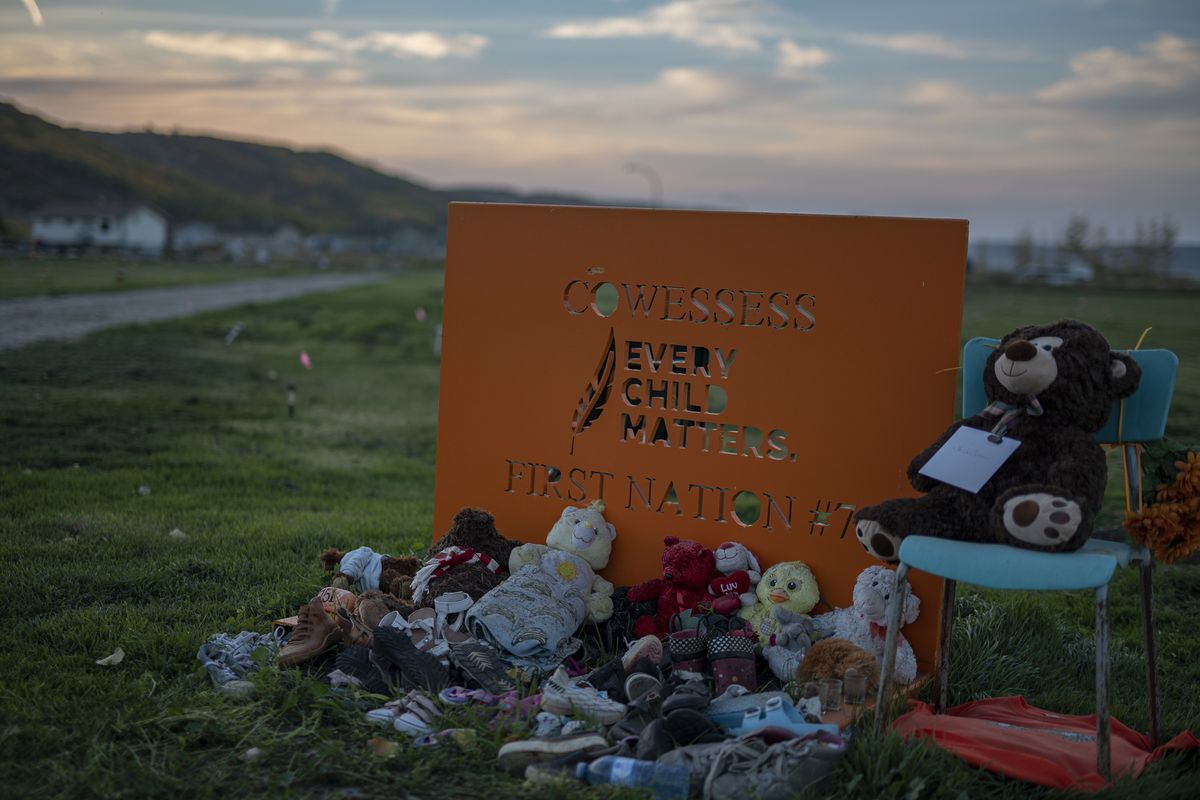 Terry Lerat only stayed at Maryval Indian Residential School for six months, when he was in grade 2. At that time he was seven years old. He is now 69 years old – and the physical and emotional scars continue to affect him today.

“It was kind of accepted that we had to take advantage of this,” Mr. Lerat told his home at Cowes First Nation in Saskatchewan that he experienced sexual abuse when he was a young child.

He remembers the name of his abuser, how he dragged her into the shower and knocked her down, how he blacked out and woke up in the office of a man in a blanket.

He stops several times during the interview to wipe away tears and goes on, at one point, clearly shaken. He has spent most of his life trying not to think about his time in school, but he wants people to know the truth about him and what happened to many others in Maryvale.

In June, Countess Chief Cadmus Delorme announced that 751 unmarked graves had been discovered in a Roman Catholic cemetery at the Maryval site. He said then locally believed that the cemetery contained the remains of both children and adults, possibly people from outside the community who attended the church there.

Cowes is holding a memorial ceremony at the site on Thursday to honor Indigenous children who died in residential school and those who survived – to mark Canada’s first National Day of Truth and Reconciliation One of the many celebrations planned across the country.

Setting aside a day to remember the disastrous legacy of residential schools was one of 94 calls for action by the Truth and Reconciliation Commission (TRC) of 2015. But it wasn’t until this year – after the discovery of hundreds of unmarked graves in several former residential schools that attracted international media attention and a wave of mourning in Canada – that the federal government formally called for truth and reconciliation on 30 September. Dedicated.

The day is a statutory holiday for all federal employees and federally regulated workplaces. The holiday, also known as Orange Shirt Day, will be observed in some schools, businesses and various levels of government. (Orange Shirt Day has been marked since 2014, an initiative started by residential-school survivors in Williams Lake, BC) Nevertheless, many provinces – including Saskatchewan – do not recognize the date as a statutory holiday. are.

Former Senator Murray Sinclair, who chaired the TRC, which spent six years investigating the impact of residential schools in Canada, reported this week that thousands of Indigenous children died in residential schools, and that many of their bodies were not sent home, nor were they sent home. Many of his family members informed about the incident.

Canada’s residential schools have operated for more than a century, with at least 150,000 First Nations, Métis and Inuit children torn from their homes and forced to attend. Many were forbidden to speak their language or practice their culture. The TRC called it a policy of cultural genocide. Mr Sinclair said the history of residential schools needed to be uncovered more, but the commission did not have the resources or time to complete its task.

The stories told as part of the National Day for Truth and Reconciliation will help to explore that history more.

“We will learn as we move forward,” said Mr. Sinclair. “The other thing we’re going to learn, I think, to this day is that we haven’t yet come to the full truth of what this experience was.”

In Cause’s First Nation, Indigenous researchers are clearing cemetery areas, making way for the pipe ceremony that will begin the memorial service.

Chief Delorme said the community would gather and residential-school survivors would tell stories, and photos from the 1900s would be shared.

“The truth is going to come out tomorrow, and it’s going to be a little uncomfortable. But at the same time, there’s all the unity, the celebrations, the dances, that’s what we’re doing tomorrow at Causeus.”

He said that the community wants to share this day with everyone who attends the event.

“This has been a wake-up call for many Canadians,” Chief Delorme said. “For many Canadians, it’s putting down the shield and starting to accept, ‘I don’t know much about indigenous peoples and true relationships with Canada.’”

Ever since the news of the unmarked graves was shared with the world, hundreds of visitors have come to pay tribute. Barbara Lovely, lead researcher at the Indian residential-school site, said many of the visitors are non-Indigenous.

“It’s touching, they come and they ask where can I come and put down my tobacco? We tell them you walk and wherever your heart desires, you can pray and set your tobacco.” Let’s do it.”

Ms Lovely said the next step in the search for the remains involved the area around the residential school.

“It can be difficult because of the disturbance of the ground, the construction, the infrastructure, whatever was built,” she said. “That’s why my mind is two steps ahead with the advanced scientific technology that we need, especially with software. We have to find a way to find the anomalies that correspond to what’s buried there.”

At an event on Parliament Hill to mark the eve of the National Day for Truth and Reconciliation, Prime Minister Justin Trudeau said the country was responsible for terrible injustices. He said that reconciliation does not just mean understanding the mistakes of the past, but it also means understanding how those mistakes shape the country today.

He said that National Day is one for all Canadians.

For Maryval survivor Mr. Lerat, Thursday’s events will help alumni, including him, learn about the bad things that happened to him.

“If you want to find out the truth – find out what happened and then use that truth to move forward, that’s a good thing. If that truth is not discovered, recognized and treated we will not move forward.” “

Being sexually abused by the adults responsible for taking care of her in Maryvale isn’t the only memory that stays with her. He saw other children being abused, and remembers a boy who nearly wet his bed at night, was forced to stand outside with his wet, dirty sheets over his head. .

The boy killed himself soon after leaving the residential school, Mr Lerat said.

He also remembers a day when he and his two cousins ​​refused to eat the rotten food they were given daily.

“Someone grabbed me from behind – here,” said Mr. Lerat, pointing to the back of his head. “They were trying to feed me. I refused to eat – and they put my head down.”

The impact dented his teeth backwards, breaking them along with the gums and bleeding from his mouth. The man who slammed her head and smashed her teeth was the one who sexually abused her.

A priest took her to his office, reached into her mouth and straightened her teeth.

The damage caused his teeth to decay into a black line when he was 32, he said.

“I was ashamed of them. I had a hard time because people would ridicule me for it,” said Mr. Lerat. “I would get into fights at bars and things like that.” He was spoiled, rotten, for 25 years. Lived with the broken teeth, until he got dentures.

One of 13 siblings, Mr. Lerat comes from a loving, hardworking family. His father was the first school-bus driver in Cowesses. He credits his parents for taking him out of the residential program so he doesn’t have to stay at school overnight. His father built a house a mile from Maryvale, which meant that his children would not have to live there full time.

Today, Mr. Lerat is the farm and ranch manager for the Cowes, and as his father did several years ago, he drives the community school bus.

He said that the abuse he suffered at Maryvale made him He was ashamed of his sexuality until he was a young adult.

“Thankfully, I married a sensible wife, and she went through the same thing [at residential school] In Duck Lake,” he said. “But she still doesn’t know my problems. I kept her away from her.”

With a report from Christie Kirkup in Ottawa