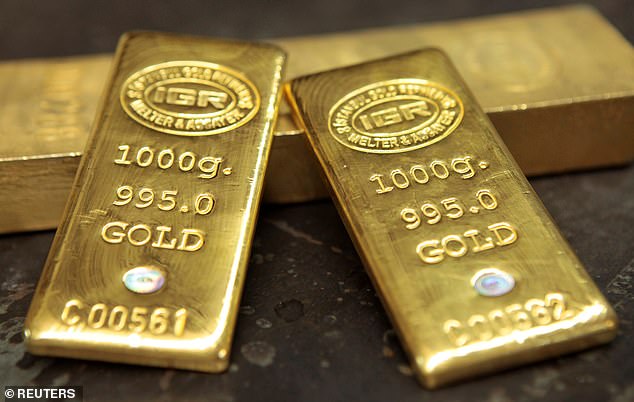 Gold has indeed been curiously calm given the rising inflation in the world, especially in Asia and the US.

Gold price has remained range bound since last one year, mostly trading between $1,700 to $1,900/oz.

Geopolitical and macro events related to China, Afghanistan, inflation and COVID-19 have had little impact on the gold price.

Calm: Gold has indeed been curiously calm, given the volatility in the world, especially in Asia and rising inflation in the US.

Gold has the biggest correlation with real rates in the US. I say ‘trends’ because correlations change over time as gold reacts to rates in one period but risks in another period.

Nonetheless, the price of gold has shown a fairly negative correlation with the real yield of US 10-year Treasury bonds, which is understandable.

Investors appreciate the safety of gold in a volatile world, but as real rates rise, the opportunity cost of investing in gold increases because bonds pay interest while gold does not.

Further increase in rates, more likely that investors will sell gold and keep funds in bonds where they will get returns.

On the other hand, a fall in falling real rates lowers the opportunity cost of investing in gold and should therefore have a positive effect on the price of gold. However, the recent sharp decline in the 10-year real yield in the US has no bearing on the price of gold, which is surprising.

Of the possible explanations, I think two make the most sense.

Gold also reacts to changes in volatility, which may help explain the sluggish price of gold. We can use the S&P 500 Volatility Index, also known as the VIX, as a proxy for market volatility.

The correlation is not as clear as the relationship between real rates and gold, but there are some identifiable phenomena. In 2011 we saw a period of high VIX which seemed to boost gold prices and during the following period of low VIX we saw a gradual fall in the price of gold.

In 2020 we again saw a spike in the VIX which coincided with a steady rise in the price of gold. In recent months, the VIX has steadily declined to around 15 levels, which is not too far from historical lows. Thus, one reason for the fall in the price of gold is the falling volatility.

The second explanation for the drop in gold prices on crypto. A portion of gold investors are those who are interested in conserving wealth in the face of inflation and other concerns.

When reviewing their options, gold fans and similar investors should definitely consider other alternative investments, including cryptocurrencies. The cryptocurrency has attracted impressive inflows partly on the price of the precious metal.

According to a recent article by the FT, the cryptocurrency market cap is now around $2 trillion. Investable gold coins, bullion and ETFs total about $10 trillion.

The relative numbers indicate that a significant number of potential gold and precious metals investors have converted at least a portion of their assets into bitcoin, ether and other digital currencies, with a negative impact on gold.

In a highly leveraged world, a hedge in gold still makes sense. With world debt levels at an all-time high, an increase in US M2 and the prospect of continued financial suppression, there remains a strong argument for gold as a portfolio diversification.

The factors that offset the generally observed gold price behavior are likely to be short-term. For example, with the US likely to decline at the end of the year, the VIX has an increased potential for growth.

We will see how this affects gold and crypto.