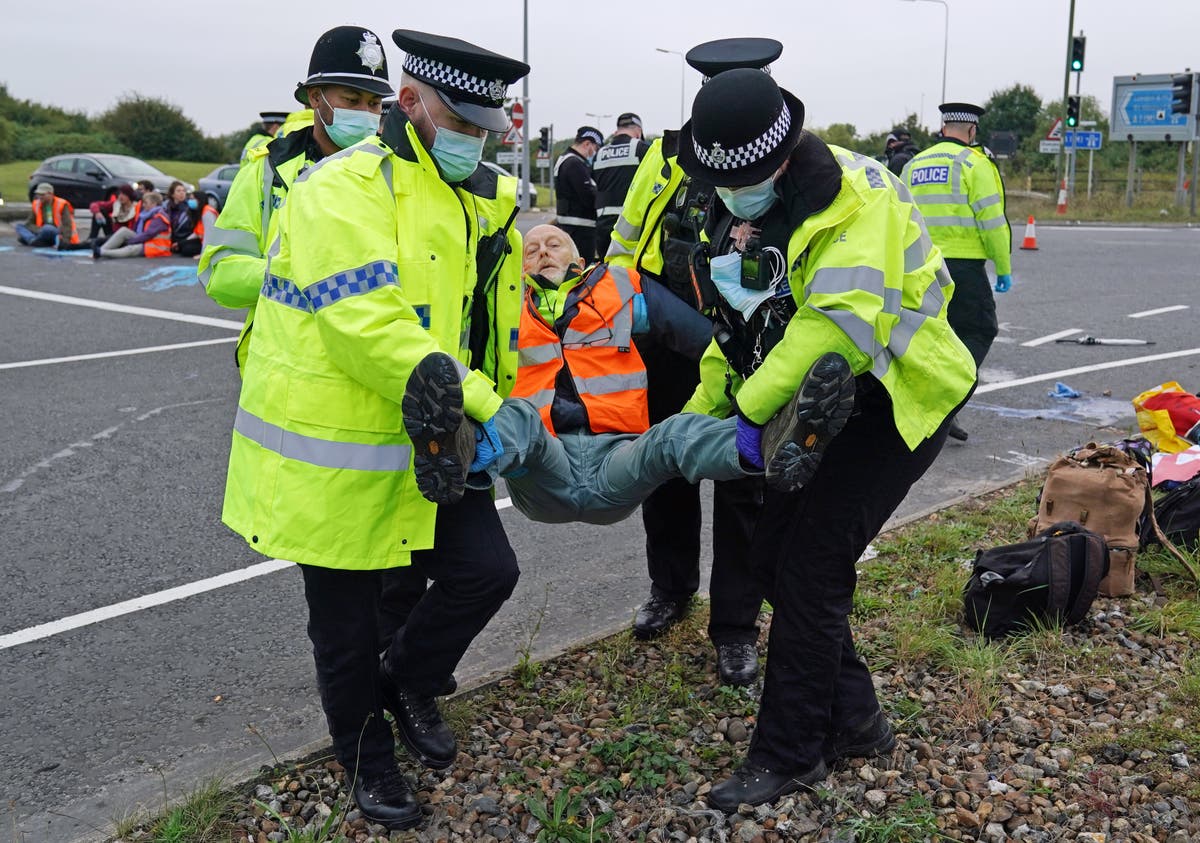 Insulate Britain activists have blocked the M25 motorway for the fourth time as they warned a “major disruption” would continue this week.

The group, whose members are calling on the government to help save homes while reducing emissions, blocked Junction 18 of Britain’s busiest motorway on Monday morning.

In a tweet, the group said the road was also painted blue, causing “further disruption”.

Hertfordshire Police confirmed that officers were called at 8.12 a.m. this morning to report protesters near Junction 18, as well as a separate demonstration near J4 (Stanborough Interchange) of the A1M.

A spokesman for the force said twenty-nine people were arrested on Monday morning and that officers remained at the scene “to resolve the disruption as quickly as possible”.

The protests took place on Monday morning when the group wrote to national highways asking them to lower the speed limit.

A statement from the group read: “Insulate is asking the UK Highways Agency to review their previous decision not to lower the speed limit, even though they were made aware that there would be major disruption.

“Given that this is a standard safety procedure when there are hazards on the motorway, Insulate Britain is surprised that it has not formed part of the campaign’s response.”

In its letter, the group said it is “fully proportionate to cause disruption to motorway networks if it means the UK government fulfills its legal obligation to stay below 20C which causes unimaginable suffering for future generations”. will stop”.

Dozens of activists were arrested last week as protests caused disruption in parts of the Southeast. The protests blocked several sections of the M25 in Kent, Essex and Hertfordshire, including Junction 9 in Leatherhead and Junction 6 in Godstone.

The group has said its action will continue until the government “makes a meaningful commitment by 2030 to save all 29 million leaky homes in the UK, which are among the oldest and most energy inefficient in Europe.”

Hertfordshire Police Chief Superintendent Nick Caveny said the force had made 79 arrests in relation to protest activity over the past week.

“Not only is intentionally blocking a highway incredibly dangerous, it also affects the thousands of members of the public who are caught in delays as a result,” she said.

“We have strong plans to minimize any disruption and allow us to make arrests as quickly as possible.”

Home Secretary Priti Patel is said to have asked the police to take “decisive” action to crack down on the protests, which brought traffic to a halt.

“Removal of individual protesters who have affixed themselves to the street or barricaded themselves with something is a complex and resource-intensive challenge and we must do it in a safe and effective manner.”

China’s Evergrande: What to know

Who is Gabrielle Petito?

Who is Gabrielle Petito?

Why Harrison Ford Decided to Return for ‘Indiana Jones 5’: ‘We’ll See Part of His History Resolved’