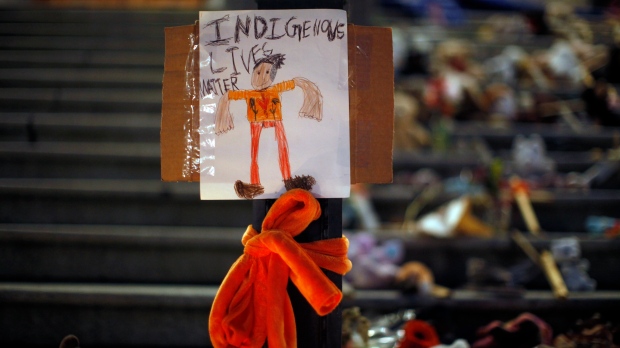 TORONTO – The Assembly of First Nations and other Indigenous advocates suspect the Canadian Conference of Catholic Bishops (CCCB) has pledged $30 million for residential school survivors.

AFN National Chief Roseanne Archibald says the CCCB’s announcement on Monday to support Indigenous reconciliation projects is welcome and “long overdue”, but says the Indigenous community needs further reassurance that How will the money be spent?

“We are no longer accepting hollow apologies,” she said in a statement. “The Assembly of First Nations is looking for further assurances that this money, every dollar, will go to the Treatment Initiative for Direct Survivors and Inter-Generation Survivors.”

Archibald warns that “due to the Church not fulfilling previous financial promises, I am sure the bishops will understand the First Nations’ skepticism and disbelief about their commitments.”

CCCB said on Monday News release That they want to get the money out within five years, taking the funding initiative at the local level. Parish across Canada are encouraged to participate and step up the effort.

“There was universal agreement that Catholic institutions needed to do more in a tangible way to address the suffering experienced in residential schools in Canada,” CCCB President Raymond Poisson said in the statement. “Combined with local diocesan initiatives, this effort will help support programs and initiatives dedicated to improving the lives of residential school survivors and their communities, ensuring the resources needed to aid in the path of healing.”

The day is a statutory holiday for all federal employees and federally regulated workplaces.

But advocates note that the financial promises made by the Church in the past have long fallen short and many are in need of greater accountability.

The greatest example of this is the historic Indian Residential School Settlement in 2005, when the church pledged at least $25 million to indigenous communities. but lawyers like Sovereign Indian League of Nations says: That despite the passage of almost two decades, this figure has come down drastically.

“Here’s a novel concept: do what you say you’re going to do. It basically comes down to what you say,” Bearhead, director of reconciliation at the Royal Canadian Geographical Society, told Granthshala.ca in a phone interview.

But Barehead says the promise of just $30 million will not improve relations between the church and Canada’s indigenous population.

“It’s a start. If they think they’ll put in $30 million, they’re out, I think that’s a concern,” she said, warning that ‘too little is too late,’ Charming for, “I think we also need to look better late than never.”

Barehead says people need to demand regular updates from the CCCB, and it is also important that members of Christian congregations maintain their leadership for their commitments.

After spending decades as a teacher in First Nations communities and both the Alberta and Manitoba public school systems, she says that keeping promises is “the only way they can change who they are in the nation’s history.”

This year, calls for concrete steps from the government and churches have only intensified as many Indigenous communities across Canada have found unmarked graves in or around the sites of former residential schools.

In the wake of those discoveries, Archibald and other Indigenous leaders have called on Pope Francis to come to the country with the survivors and formally apologize for the role played by the Catholic Church in Canada’s residential school system, which many advocates say. To say that it is similar to cultural. Massacre

Back in June, the CCCB said national indigenous leaders would be meeting with the Pope at the Vatican in December.

As for Monday’s announcement, the CCCB says funding for the projects will be determined in consultation with First Nations, Métis and Inuit populations in each region.

Archibald says she will “reach out to Canadian bishops to ensure that First Nations are part of the development of national principles and strategy, timelines and public communications as stated in her declaration.”

“I appreciate that they understand the principle of ‘nothing about us, without us’.”