Huge Jupiter-sized planet discovered 6,500 light years away is the first of its size to be found orbiting a DEAD STAR 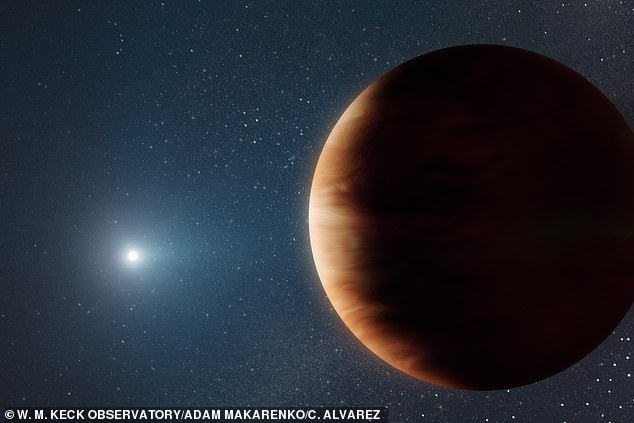 A Jupiter-sized planet orbiting a white dwarf in the Milky Way has been discovered marking a world of its size around a dead star for the first time, according to astronomers.

When a Sun-like star comes to the end of its life, it enters its giant phase, leaving a small, white core, called a white dwarf, before being pushed off its outer layers.

Observations from the Keck Observatory in Hawaii allowed the team from Australia and New Zealand to study the system in greater detail.

The team found that the gas giant, called MOA2010BLG477Lb, was able to escape the death of its host star, and is now orbiting much closer than it once did.

The team said that the system, located about 6,500 light-years away in the direction of the galaxy’s center, is a good example of what can happen to Jupiter when the Sun reaches the last stage of its life in about five billion years. goes.

A Jupiter-sized planet orbiting a white dwarf in the Milky Way has been found around a dead star for the first time, according to astronomers.

What is a White Dwarf?

A white dwarf is the remnant of a star that has run out of nuclear fuel.

Stars 10 times the mass of the Sun suffer a violent supernova at the end of their lives, but a more gentle end awaits Sun-like stars.

When stars like the Sun come to the end of their lives, they exhaust their fuel, expand as red giants, and later expel their outer layers into space.

The hot and very dense core of the former star – a white dwarf – remains.

White dwarfs have almost the mass of the Sun but the radius of Earth.

The planet is about 1.4 times the size of Jupiter and is currently about two and a half times further from the Sun than Earth from its star.

They found that the remnants of destroyed planets and debris-disk planets may have survived the unstable evolution of their host stars from red giants and white dwarfs.

However, simulations made by astronomers also predicted that full-size planets could also survive.

Simulations suggested that planets in an orbit similar to Jupiter, around a star more than eight times that of the Sun, were most likely to remain intact.

However, until now, with the discovery of MOA2010BLG477Lb, no such worlds had been discovered by astronomers orbiting a white dwarf.

The gas giant was found about 2.8 AU, or about 260 million miles, from the white dwarf star, which is about half the mass of the Sun.

A white dwarf is a very dense star, often combining the mass of the Sun into a body the size of Earth.

This makes them remarkably difficult to find.

In the study, Joshua Blackman and his colleagues obtained a deep exposure of the region around MOA2010BLG477L, previously discovered through microlensing – the only known method capable of discovering planets at truly great distances from Earth.

The team found that the planet formed at the same time as the host star, rather than the debris left behind when the star shed its outer layers.

This means that it somehow managed to survive when the star stopped burning hydrogen in its core, providing evidence that the planet may have survived the gas giant phase.

When a Sun-like star comes to the end of its life, and can no longer combine the lighter elements such as hydrogen and helium, it breaks down into its massive star, before pushing off its outer layers, and leaving a small, white core. enters the phase, known as a. White dwarf

The work supports the theory that more than half of white dwarfs are predicted to have similar planetary companions.

The astronomers also said that it is ‘likely to correspond to the final phases of the Sun and Jupiter in our own solar system.’

The findings have been published in the journal Nature.

What will happen to Earth when the Sun dies?

Five billion years from now, the Sun is said to have grown into a red giant star a hundred times larger than its present size.

Eventually, it will expel gas and dust to form an ‘envelope’, equal to half its mass.

The core will become a small white dwarf star. It will continue to shine for thousands of years, forming a ring-shaped planetary nebula.

Five billion years from now, the Sun is said to have grown into a red giant star a hundred times larger than its present size.

While this metamorphosis would change the Solar System, scientists are unsure what will happen to the third rock from the Sun.

We already know that our Sun will be bigger and brighter, which would probably destroy any form of life on our planet.

But whether Earth’s rocky core will survive is uncertain.

Josh Duggar’s Trial: Justin Duggar Has Not Commented On His Brother’s Arrest