How LLAMAS are helping in the fight against Covid: Scientists say infected patients could one day inhale a nasal spray containing tiny virus-fighting proteins made by the camelid 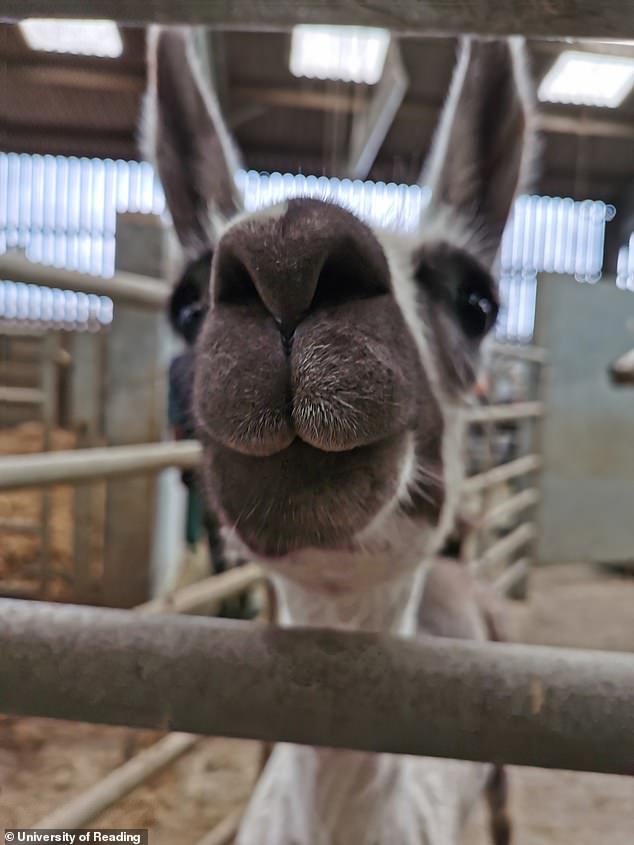 Research suggests that small antibodies produced by llamas may help in the fight against COVID.

And scientists say the virus-fighting proteins could be given as a nasal spray to infected people.

Academics from the Rosalind Franklin Institute in Oxfordshire found that nanobodies – a small type of antibody produced by llamas and camels – can effectively target the type of coronavirus that causes Covid.

The short chains of nanobodies significantly reduced disease symptoms when given to infected animals.

Scientists say the nanobodies, which can easily be mass-produced in the laboratory, could provide a cheap and easy alternative to human antibodies.

During the pandemic, antibodies have been received from survivors to help critically ill patients fight off the virus.

But they usually need to be administered by a medical injection in a hospital.

“These are among the most effective Sars-CoV-2 neutralizing agents that we have tested in PHE,” he said.

‘We believe the unique structure and strength of nanobodies contribute to their significant potential for both prevention and treatment of Covid and look forward to working collaboratively to advance this work into clinical studies’ .’

Professor Ray Owens, Head of Protein Production at the Rosalind Franklin Institute and lead author of the research, said: ‘Nanobodies have several advantages over human antibodies.

‘They are cheap to produce and can be delivered directly into the airways via nebulizer or nasal spray, so can be self-administered at home rather than requiring injections.

‘This may have benefits in terms of ease of use by patients but it also achieves treatment directly at the site of the respiratory tract infection.’

In the study, published in the journal Nature Communications, scientists used a llama named Fifi to make the nanobodies.

Fifi the Llama (pictured) Antibodies found in blood may help develop a new treatment for COVID. Fifi was injected with a portion of the spike protein found on the outside of the coronavirus to trigger the creation of antibodies. These specialized antibodies, called nanobodies, can be used to create a cheaper and more easily produced alternative to human antibody-based COVID treatment.

They injected the camel with a portion of the spike protein, which is found on the outside of the coronavirus.

While the injections didn’t make Fifi sick, they did trigger his immune system to fight the virus protein by generating nanobodies against it, a process similar to the way vaccines work in humans.

A small blood sample was taken from Fifi and the researchers were able to purify four nanobodies capable of binding to the COVID virus.

The proteins were then ‘chained’ together to increase their ability to bind to the virus. After this they were prepared in the laboratory.

What is an antibody?

An antibody is a protein component of the immune system that circulates in the blood, recognizing and neutralizing foreign substances such as bacteria and viruses.

After exposure to a foreign substance, called an antigen, antibodies continue to circulate in the blood, providing protection against future exposure to that antigen.

Three of the nano-series were able to neutralize both the original version and the alpha version of the covid virus.

Tests showed that a fourth nanobody chain was also able to neutralize the beta version.

When covid-infected hamsters were given one of the nanobody chains, the animals were better able to fight off the virus than those treated to lose ‘very little’ weight after seven days than those left untreated.

The hamsters that received the nanobody treatment had a lower viral load in their lungs and airways after seven days than untreated hamsters, meaning they were less likely to infect others.

Researchers say the results are the first step towards developing a new type of treatment against COVID, which could prove invaluable as the pandemic continues.

Professor James Naismith, director of the Rosalind Franklin Institute, who helped lead the research, said: ‘Drugs that treat the virus are still going to be very important, especially when vaccinations are not being done at the same pace around the world. And there is a risk of new variants emerging capable of bypassing vaccine immunity.

Other studies have previously highlighted antibodies produced by llamas as a possible way to fight COVID.

In November last year, US researchers at the University of Pittsburgh injected a llama named Wally with the Covid spike protein to make the nanobodies.

Earlier in 2020, University of Texas researchers found llama nanobodies to be effective against Severe Acute Respiratory Syndrome (SARS), a virus related to COVID.

The scientists took spike proteins that are found on the outside of the Covid virus and injected it into a llama named Fifi. While Fifi didn’t get sick, she produced special antibodies found only in llamas, called nanobodies. The scientists then took these antibodies and tested them on hamsters infected with Kovid. Those who received treatment were less affected by the virus and less likely to spread it to others.

Coats at the ready! Autumn officially begins in the Northern Hemisphere TONIGHT when the sun will be directly above the equator, making day and night equal in length

How much it costs to live near London’s two new Underground stations – including a £16m Battersea Power Station flat Mind the gap!

How much it costs to live near London’s two new Underground stations – including a £16m Battersea Power Station flat Mind the gap!

Tall waves could mean more ice-forming clouds, according to study that seeks to improve climate models