GP consultations held over the phone are recorded as ‘face to face’: Doctor appointments that take place remotely are being falsely documented as in-person meetings, health chiefs admit 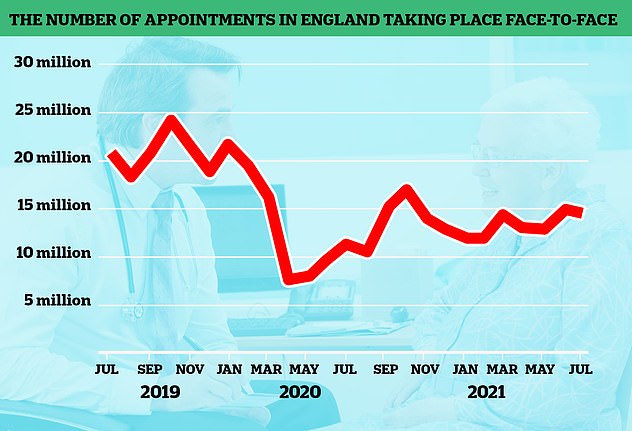 Even face-to-face GP appointments are falling short of fears that some phone consultations are being incorrectly recorded as having happened in person, it emerged today.

The officials have admitted the mistake, blaming the way the appointments are booked.

But the actual extent of the issue is unknown, with a cloud of doubt now over the official figures.

Face-to-face appointments still haven’t returned to pre-Covid levels, despite family doctors being ordered to give them to those who still want them.

Figures from NHS Digital for England show that in August only 58 per cent of GP appointments were made face-to-face. This is well below the levels seen before the pandemic, when 80 per cent of consultations were done in person.

But campaigners fear that the actual figure has been ‘filtered’ after revelations that some appointments were incorrectly classified in official figures.

Over the past decade, the average number of sessions GPs work a day has decreased while their pay increases have increased. In 2012 the average GP worked 7.3 sessions a week, but this has now dropped to 6.6 per week, which is equivalent to three days of work a week. Average GP income increased by over £6,000 over the same period. A GP’s daily work is divided into sessions. According to the NHS, a full-time GP works 8 sessions a week, composed of two sessions a day, usually starting at 8am and ending at 6.30pm, although these hours can vary .

‘If the GP had come to our house, my wife would have survived’

A grieving husband claimed today that his cancer-stricken wife would still be alive had a GP not refused to come home.

Anton, the father of Bromley’s three children, begged a doctor to visit his 44-year-old wife, who was in ‘severe pain’. But a nurse was sent in his place, who only checked his pulse and temperature.

By the time his wife finally got to the hospital, it was ‘too late’, he told LBC in a heartbreaking interview this morning. He died three months earlier after his illness spread to his brain.

Anton, who only gave his first name, said: ‘My wife would have been saved or treated long ago if that doctor had given the home visit I deserved.’

Face-to-face and home visit appointments still haven’t returned to pre-Covid levels, despite doctors being ordered to give them to those who still want them.

Only 0.6 per cent of appointments in August were home visits, which was less than one per cent before the Covid crisis.

Senior doctors have long called for visits – a cornerstone of general practice for decades – to be canceled because they are time-consuming, even despite campaigners’ warnings that it could be a risk to stay-at-home moms-to-be. , would be disastrous for the elderly and those who died.

Anton said: ‘I lost my wife three months ago.

‘He had cancer. Once he had severe pain, I called my GP and I explained to the GP and in fact, I begged him to come home and advise me. [whether] Whether to take him to the cancer unit immediately or not.’

But Anton reveals that the GP sent a rapid service nurse instead, claiming they only took his wife’s pulse and temperature.

When his wife later fainted, he took her to A&E.

Tests revealed that the cancer had spread to his brain.

The details of the timeline were unclear, and it is unclear how long between the nurse’s visit and her fall. It is also not clear what type of cancer he had.

Anton said: ‘My wife would have been saved, or treated long ago, if that doctor had made the home visit I deserved.

‘I checked out NHS England and it clearly said at that time that doctors should do home visits for those who cannot come for surgery.

‘But that is not happening and even today, surgeries are trialled only by phone.’

In a warning to their official data, which is classified as experimental, NHS Digital reported that since the start of the COVID pandemic some GP appointments have classified some remote conversations as face-to-face.

It says: ‘As of March 2020, face-to-face appointment mode data may not fully reflect what happens in practices.’

The body adds: ‘The type of appointment has been assigned to the appointment mode before the pandemic.

An NHS Digital spokesperson said: ‘We acknowledge that there can be data quality issues with data and instances where the data may not be an accurate representation of what is happening across all practices.’

One possible scenario for this to happen would be if a patient booked for a face-to-face appointment is asked to self-isolate as they may have COVID.

In this situation the GP can change the consultation to be over the phone, but since it was originally booked as a face-to-face appointment, how can it be entered in the official data.

As the NHS digital dataset details, although there are national guidelines for GPs to record appointment data, these are not standardized across all practices, making it problematic to draw conclusions on the data.